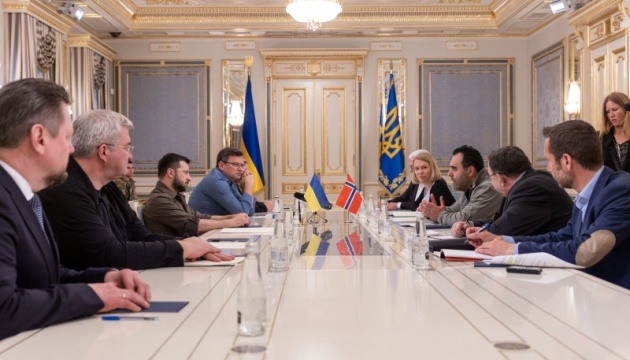 Zelensky meets the Speaker of the Norwegian Parliament

“I am happy to meet you. I am grateful for the support for the sovereignty and territorial integrity of Ukraine, as well as for the opportunity to speak in your parliament,” Zelensky said, informs the service of the Head of State’s press release.

He also thanked Norwegian society for supporting the Ukrainian people.

For his part, Gharahkhani noted that it is an honor for him to visit Ukraine. He stressed that Volodymyr Zelensky’s speech at the Storting was historic.

“Today my country celebrates the day when we managed to regain our democracy and independence after World War II. Unfortunately, today your country is once again going through aggression and violence,” the president said. of the Norwegian Storting.

Gharahkhani said he was deeply shocked by the consequences of the Russian occupation in Irpin and Bucha in Kyiv region.

“I want to confirm to you that Norway always stands with Ukraine,” he said.

The parties discussed the issue of increasing Norwegian security support to Ukraine. The President thanked Norway for the decision to supply defensive weapons to Ukraine and its practical implementation.

During the meeting, Zelensky and Gharahkhani discussed approaches to further tighten sanctions against Russia. The parties also discussed the possibility of cooperation in the field of energy security.

The President praised the financial support to Ukraine and the humanitarian aid from Norway and invited to join in the reconstruction of the country.

Earlier, Speaker of the Verkhovna Rada of Ukraine Ruslan Stefanchuk and Speaker of the Storting Masud Gharahkhani of Norway in Kyiv commemorated fallen Ukrainian defenders.

Photo credit: Office of the President

2022-05-08
Previous Post: Switzerland plans further cooperation with NATO in the context of the Russian war in Ukraine
Next Post: Indian workers and students speak out on the NATO-Russia war