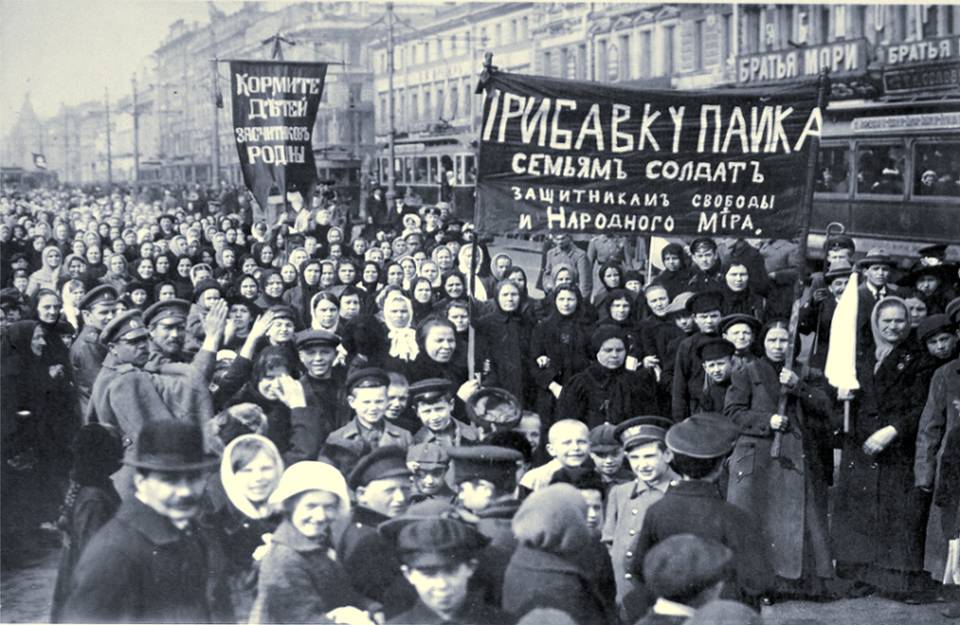 One hundred years ago, working women in St. Petersburg, Russia, began a strike on International Women’s Day that opened the struggle that quickly ended the 370-year reign of the Tsars and led in eight months to the first socialist state. A key factor was the change in consciousness of the soldiers of the city garrison. The following is excerpted from John Catalinotto’s new book, “Turn the Guns Around: Mutinies, Soldier Revolts and Revolutions”.

On February 23, 1917, according to the Julian calendar used in Russia at that time – March 8 in the rest of Europe – a 25-year-old revolutionary sailor, whose Bolshevik party name was Raskolnikov, looked out of his window in Petrograd, Russia. industrial center and capital.

Russian leaders had decided to call the city Petrograd instead of Saint Petersburg would sound less German, as they were at war with Germany. Raskolnikov thought, “Today is Women’s Day. Is something going to happen in the streets today? Something happened. Some 128,000 workers were on strike. The whole town was bubbling.

In the end, “Women’s Day” was destined to be the first day of the revolution. The workers, despairing of their harsh conditions and plagued by the torments of hunger, were the first to take to the streets to demand “bread, freedom and peace”. The crowd faced police mounted on horses, who pushed people or hit them with the flat of their swords.

One observer wrote:[A]As soon as the gendarmes on horseback had returned to the road, the crowd closed in a solid mass. In some groups we could see men, but the overwhelming majority were female workers and workers’ wives.

Eight weeks earlier, in early 1917, Vladimir Ilyich Ulyanov, whose party name was Lenin, was in exile in Zürich, Switzerland, where he had organized and spoken out against the great imperialist war. In an interview with young students, he remarked that Russians as old as himself – forty-six at the time – would probably never see a revolution overthrow the Russian Tsar, but the youth would.

Even this most revolutionary working class leader was surprised by the explosive speed of change in Russia. One can only imagine how oblivious Tsar Nicholas II was then to his impending doom.

As Raskolnikov wrote, the first of two 1917 revolutions in Russia began on February 23 with a strike by women workers on International Women’s Day. The action turned into a general strike and a mass political revolution in the capital that overthrew the Tsarist monarchy that had ruled Russia since 1547. The attitude and actions of lower-ranking soldiers and sailors were a determining factor in the success of the revolution.

Context of the revolution

The tsarist empire had ruled over many subject peoples – Finns, Lithuanians and Estonians in the northwest; Poles and Ukrainians in the West; the Georgians, Armenians and many Turkic and predominantly Muslim peoples of the Caucasus and the South; plus the indigenous peoples of the Arctic and Siberian regions; and Jews and other minorities throughout its vast territory.

Tsarist Russia was far less economically developed than the great imperialist powers of Western Europe – Germany, France and Britain. About five-sixths of Russia’s 185 million people were peasants, who had been freed from legal serfdom in 1861 but were still in the grip of landlords and nobility. About twenty-six million of its inhabitants were wage laborers in 1917, including 6.5 million farm laborers and another six million in private and state-owned industry.

Although they represent a smaller part of the total population than in Germany, Britain and the United States, Russian industrial workers were more concentrated, working in recently created giant factories that employed thousands , even tens of thousands of workers.

Russia was by far the poorest of the major countries, but some fifteen million men, mostly peasants, were drafted and thrown into the battles of World War I with little training or equipment. It was cannon fodder. By 1917, more than two million people had died and another four million had been injured.

With so many men under arms, a large number of women were employed in heavy industry in Petrograd; women made up about a third of the workforce there. More than 100,000 of these women went on strike on February 23, defying the tsarist state, defying the precautions of their political parties, defying everyone. On that first day, the strikers generally emerge unscathed from clashes with the police.

Encouraged by this success, the male workers joined the women the next day, and in all more than 200,000, or half of the workers in the city, were on the streets. General Sergei Khabalov, who commanded the army garrison in Petrograd, was in charge of controlling the demonstration.

But the workers, and especially the women, many of whom were soldiers’ wives, chatted with the garrison troops. They even approach the Cossacks, who are mounted troops often used in punitive actions against the crowds, but who show the workers that they are tired of this unpleasant duty. On the other hand, the workers were hostile to both the regular police and the secret police; the latter especially were enemies of the people and fervent defenders of the Tsar.

A political intellectual named NN Sukhanov, who belonged to the internationalist wing of the Menshevik Party (the right wing of the former Russian Social Democratic Labor Party), wrote a detailed eyewitness account of the 1917 revolution. book, he described a telling moment when a Cossack got so angry when he saw a police inspector attack one of the protesters with his sword that he “flew on the inspector and cut off his hand”.

The soldiers return the guns

On February 26, as the increasingly friendly fellowship between workers and troops continued, something special happened. Something like this has probably happened in every successful revolution of urban society. Soldiers from the Pavlovsky Regiment, a major military unit in the Petrograd garrison, witnessed a police unit on one side of a river fire at protesters on the other. Sukhanov wrote:

“Seeing these shots at unarmed people and the wounded falling around them, and being in the area of ​​fire, the Pavlovskys opened fire on the police on the other side of the canal.”

When a regiment as important as the Pavlovsky breaks with tyranny, its soldiers have only one course to follow: spread rebellion – or die. On the same day, representatives of the workers’ and peasants’ parties – the Mensheviks, the Bolsheviks and the Social Revolutionaries – met to form the Petrograd Soviet, the Russian word for “council”. This political direction of the revolution, for its part, was to help spread the rebellion of the soldiers.

That evening, the elected Provisional Executive Committee of the Petrograd Soviet met, declaring that the soviet was now open. His first task was to start organizing emergency rations for the garrison troops who had come to the revolution. The mutinous soldiers knew that they were still a minority of the garrison and that their lives were at stake if the revolution was not brought to an end. They had to act.

“They told us to say that we refuse to serve any longer against the people, we will unite with our fellow workers, all united, to defend the cause of the people. … We would give our lives for this. Long live the revolution!”

Soviet reaches out to troops

The Soviet received a report that a regiment loyal to the Tsarist regime was arriving, which caused some nervousness, but Sukhanov ended his text with this description which showed how the population and the whole army had turned against Tsar Nicholas and the war:

“Later we [Soviet members] became convinced that any attempt to send troops for the pacification of Petersburg was futile. All the “loyal” troops retained their loyalty and obeyed their commanders only as far as the stations, then immediately went over to the side of the revolution, and the commanders obeyed them.

The Bolsheviks, Lenin’s party, were perhaps as surprised as everyone else at the speed with which the revolutionary movement was developing, but they were the first to adapt to the new situation. Groups of Bolshevik workers raided police stations, took weapons and distributed them to their supporters. The soldiers, who as a whole were still hesitant, then saw that there were contingents of armed, determined and well-organized workers, ready to carry the revolution through to its end.

With tens of thousands of soldiers already in a state of mutiny and risking death if the revolt were to end before they overthrew the Tsar, the troops who had already mutinied had no choice but to reach out to their soldier brothers and win them over to the revolution. It was not a difficult task, as the rank and file soldiers had had enough of the hated Tsar and the rest of the nobility, and most were eager to return to their farms. In the days that followed, the entire Petrograd garrison joined the Revolution.

Under pressure from bourgeois parties in a new government, on March 1, Tsar Nicholas II tried to abdicate in favor of his brother Mikhail, but Mikhail refused to take over the sinking ship. The tsarist ministers are arrested.

Armed soldiers responding to the Soviet were arresting any policemen who were still on the streets interfering with the masses, who in turn were demolishing the symbols of the Tsarist regime. On March 3, the executive committee of the Petrograd Soviet ordered the arrest of the Tsar, who attempted to flee. He was captured, along with the rest of the royal family. The empire had come to an end.

It was the first big step that was to lead within the next eight months to a revolution that would not only eliminate the nobility, but end the rule of the capitalists and change the course of the 20th century.