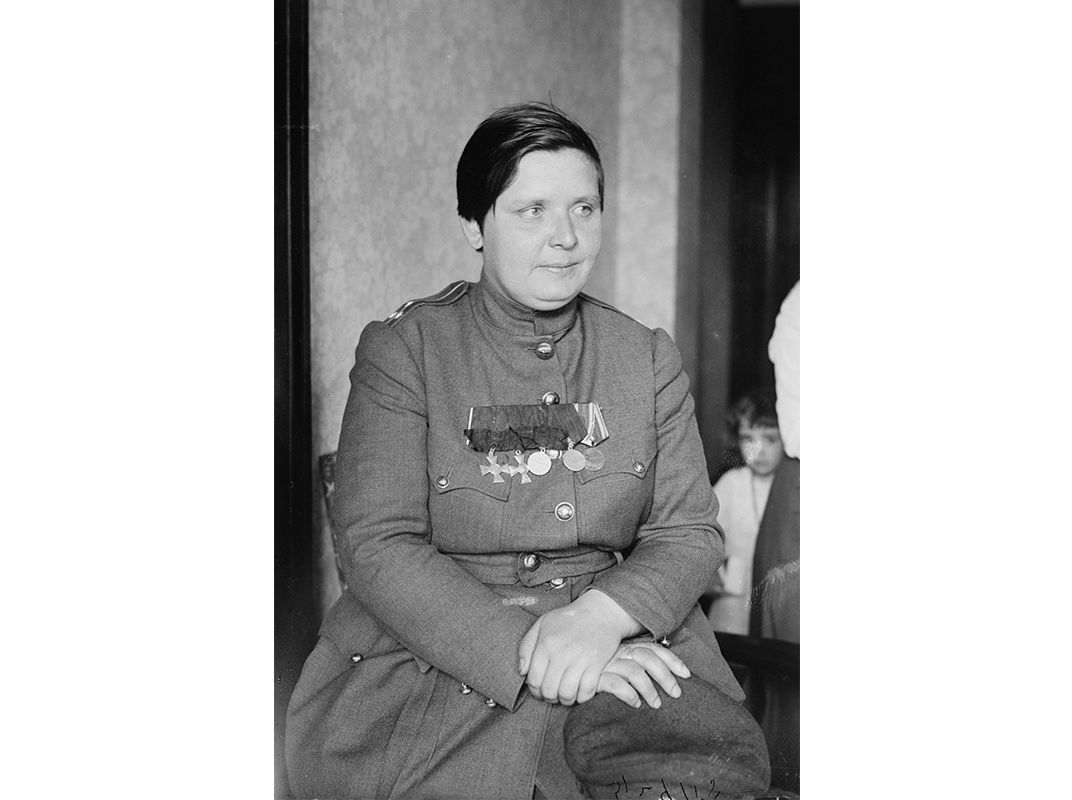 “My hostess kept her eyes fixed on me. “How little you resemble a Cossack! You are so pale, so thin, so beautiful like a young woman. That’s what my wives think; they already told me you were a girl in disguise! ” – Nadezhda Durova, The Cavalry Maiden: Diaries of a Russian Officer in the Napoleonic Wars

On May 1, 1917, workers around the world celebrated May Day, and even though it was April 18 on the Russian calendar, the St. Petersburg workers’ council commemorated the holiday in solidarity with the European proletariat. The significance of May Day had been articulated by Bolshevik Party leader Vladimir Lenin long before the Russian Revolution. While incarcerated in a Tsarist prison in 1896, he wrote a pamphlet explaining the significance of the holiday for Russian workers.

“In France, in England, in Germany and in other countries where the workers have already united in powerful trade unions and have acquired numerous rights,” he writes, “they have organized themselves on [May 1] a Labor holiday. Leaving the stifling factories, they parade, banners unfurled, to the sound of music, in the main streets of the cities, demonstrating to the bosses their constantly growing power. They gather at large mass demonstrations where speeches are made…”

The St. Petersburg celebrations followed the pattern described in Lenin’s 1896 pamphlet. Claude Anet, foreign correspondent for The Little Parisiana French newspaper, wrote that outside the Winter Palace “The huge square was like a human ocean in which the swaying of the crowd resembled the movement of the waves [with] thousands of red flags with inscriptions in gold letters fluttering in the wind.

Dozens of speeches marked the event, as well as military bands playing both the anthem of the French Revolution, the Marseillaise, and popular Russian songs. Anet observed that many prohibitions demanded “land, freedom, peace, down with war”.

Under house arrest with his family in a palace just outside St Petersburg, the former Tsar, now known as Colonel Nicholas Romanov, complained about the celebrations in his diary as his guards joined the festivities. Nicholas wrote: ‘Overseas it’s May Day today so our fools have decided to celebrate with street processions, musical choirs and red flags. Apparently they came straight into the [palace] park and lay wreaths at the grave [of victims of the February Revolution].”

At the time, Nicholas and his wife Alexandra were still under investigation by the Provisional Government for their wartime conduct, and the gates to the palace grounds attracted both revolutionary protesters, outraged that the family imperial continues to live in relative comfort, and curious onlookers. , hoping to catch a glimpse of the former Tsar out for a walk with his daughters under guard.

May Day fell during the “April Crisis”, when the Provisional Government was torn between the Prime Minister, Georgy Lvov, a nobleman who belonged to the cadet party and the leaders of left-wing political parties. Even the coalition government that emerged from this struggle could not mend the rift as the Bolsheviks refused to join other socialist parties in working with the Provisional Government.

The main difference between the ruling Provisional Government and the Bolsheviks was Russia’s participation in World War I. Lvov and War Minister Alexander Kerensky were determined to continue the conflict, while Lenin favored an immediate peace that would end the “imperialist” war. While the Provisional Government urged soldiers to remain at their posts at the front, Lenin encouraged fraternization with German and Austrian troops and the breakdown of the traditional hierarchy of military discipline.

In November 1914, at the start of the war while Nicholas II was still in power, a peasant woman fleeing an abusive marriage named Maria Bochkareva asked the Tsar for permission to enlist in the Imperial Russian Army. As Bochkareva explained in her memoirs, “The [local] commander was deeply impressed by my stubbornness and wanted to help me. He suggested that I send a telegram to [czar], telling him of my desire to defend the fatherland, of my moral goal and begging him to grant me permission to enlist. The commander promised to compose the telegram himself, with his own recommendation, and to have it sent from his office.

Nicholas agreed, and in Bochkareva’s memoir she wrote that she was mocked and sexually harassed by her comrades until she proved herself on the battlefield, earning their respect. During the war, Bochchareva was wounded twice and received three medals for bravery.

There were precedents for women serving in combat roles in the Russian military. During the long war between Imperial Russia and Napoleon’s France in the early 19th century, Nadezhda Durova, the daughter of a Moscow soldier, enlisted in the cavalry disguised as a teenager. When awarding the Cross of St. George for bravery to Alexander I, the Tsar said: “I heard you are not a man. Is it true?”

Durova managed to convince Alexander not to send her back to her father, and she served for ten years in the cavalry. After the Napoleonic Wars, the poet Alexander Pushkin persuaded Durova to write his autobiography, The Cavalry Maiden, which became the first Russian memoir published during its author’s lifetime. The book received good reviews and the initial print run sold out, but Durova fell into historical obscurity until she became the subject of a 1908 young adult novel by Lydia Churilova titled A bold girlwho inspired a new generation of Russian women.

Bochkareva was not the only woman to join the Russian army. The Saint Petersburg correspondent of The Times of London wrote about a 16-year-old schoolgirl from Moscow named Zoya Smirnova who fled to the front with 11 of her classmates. According to reports:

The soldiers treated the little patriots paternally and decently, and having hidden them in the [train] cars took them to war. A military uniform was obtained for each; they put them on and arrived safely at the Austrian border, where they had to get off the train and walk to Lemberg [now Lviv, Ukraine]. Here, the authorities of the regiment found out what had happened, but not being able to persuade the young patriots to return home, allowed them to march with the regiment.

The girls saw the action in the Carpathian Mountains. Smirnova witnessed the death of a friend and was injured twice before being persuaded to leave the army and become a nurse. Reports of female soldiers fighting under male aliases and being awarded the Cross of St. George for their bravery appeared throughout the war.

By May 1917, however, the war was dragging on, with male soldiers abandoning their posts on the Eastern Front en masse. Bochkareva, in a meeting with Kerensky, offered an unconventional solution: the creation of all-female battalions would shame men into continuing the fight. Bochkareva recalled in her memoirs: “I was introduced to Kerensky at the Winter Palace…. After dinner, Kerensky greeted me and told me that he would allow me to form a death battalion on my behalf… They distributed uniforms and equipment, and provided instructors.

On May 21, Bochkareva issued a call to arms, declaring: “Citizens!… Our mother is dying. Our mother is Russia. I want to help save her. I want women whose hearts are pure crystal, whose souls are pure, whose impulses are noble. With such women setting an example of self-sacrifice, you men will do your duty in this grave hour.

The speech, which was picked up in the newspapers the following day, attracted 2,000 volunteers. Only 500 reached Bockkareva’s high standards during training. In her memoir, she claimed, “I fired 1,500 women for their cowardly behavior”, which included flirting with male instructors.

But she also had political motives for dismissing volunteers. While the male soldiers formed councils or Soviets to represent their interests to their officers, Bockhareva did not allow his recruits to question his authority. Her example inspired the creation of other women’s battalions across Russia. Like Jane McDermid and Anna Hillyar, authors of Midwives of the Revolution: Bolshevik women and workers in 1917write: “There were similar initiatives in the cities of Moscow, Saratov, Tambov, Mariupul, Ekaterinburg, kyiv, Tashkent, Ekaterinodar, Odessa, Minsk, Pskov, Riga and Ufa”.

The creation of all-female military units has captured the imagination of women’s equality advocates both in Russia and abroad. The Provisional Government had recognized the contribution of working women to the overthrow of the Tsar by allowing them to become political deputies and promising women the right to vote in future elections. Now, Russia seemed to be expanding women’s participation in the military beyond the roles permitted by any other European power. British suffragist Emmeline Pankhurst traveled to St Petersburg leading a British delegation and praised the bravery of female soldiers, saying “I honor these women who set such an example for their country.”

After a few weeks of training, the Female Death Battalion set out for the Eastern Front. Thousands of St. Petersburg residents gathered at the station to watch the women go off to war. The success of the summer hostilities, known as the “Kerensky Offensive”, would help determine the fate of the Provisional Government, which remained committed to the war while Lenin’s Bolsheviks promised “peace, land and the bread”.

2017-04-28
Previous Post: Why Putin is reluctant to celebrate the centenary of the Russian Revolution
Next Post: News desk | ILLINOIS