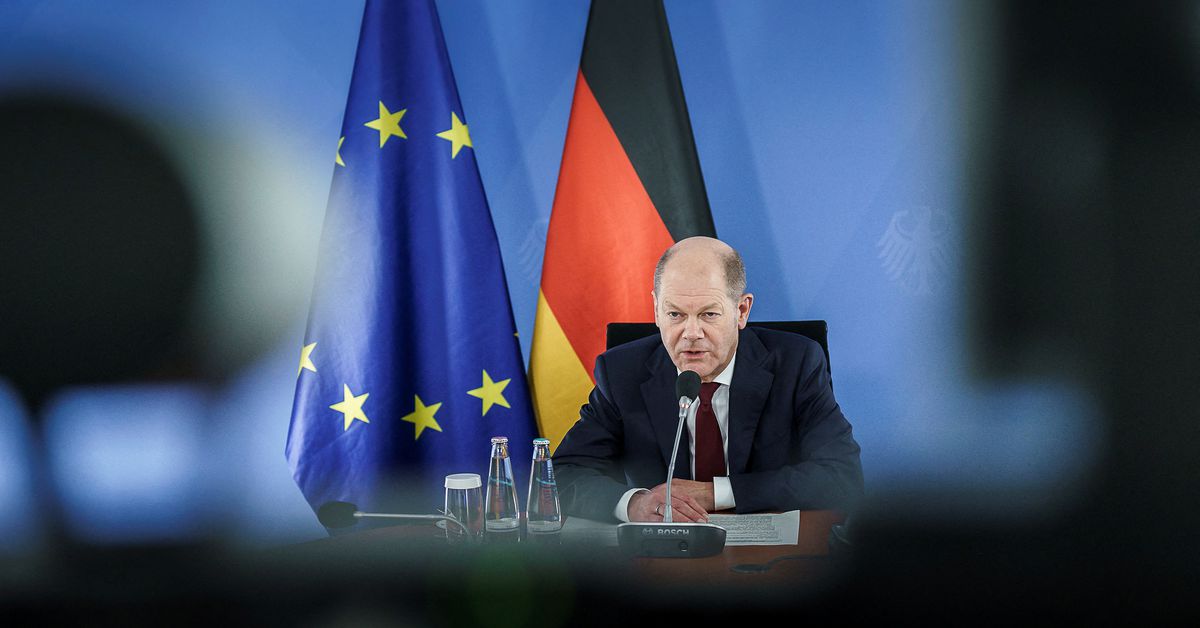 “Which side are you on?” : Russia’s threat of war undermines Ukraine’s confidence in its relations with Germany

A Bundesregierung handout shows German Chancellor Olaf Scholz during a video conference with US President Joe Biden and European leaders talking about Russia and Ukraine from the chancellery in Berlin, Germany, January 24, 2022. Jesco Denzel /Bundesregierung/Handout via REUTERS

KYIV/BERLIN, Jan 25 (Reuters) – Ukrainians were so grateful for British military aid that arrived last week that “God Save the Queen” trended on Twitter, while a western winery Ukraine offered free drinks to British nationals.

But Ukrainians, faced with what they fear is a threat of Russian invasion, have less confidence in the support of a closer and bigger friend – Germany, where a new coalition government has given signals decidedly mixed.

Berlin has refused to sell arms to Ukraine and has pushed to open a new pipeline for Russian gas that would bypass Ukraine and deprive it of badly needed transit fees.

When German navy chief Kay-Achim Schoenbach said last week that Russian President Vladimir Putin deserved respect and that trying to reclaim Crimea, annexed by Russia in 2014, was a lost cause, he resigned .

But the reckless comments had some Ukrainians wondering if Germany could be trusted to help protect them. Ukraine’s ambassador to Berlin denounced “German arrogance and megalomania”, while Foreign Minister Dmytro Kuleba said Germany’s actions encouraged Putin to attack.

“So the question arises: Which side is the German government on today? On the side of freedom, that is – of Ukraine? Or on the side of the aggressor?” Kyiv Mayor Vitali Klitschko, a former world heavyweight boxing champion who lived for years in Germany, wrote this week on Facebook.

Germany, along with France, is the co-sponsor of peace talks between Ukraine and Russian-backed forces fighting a separatist conflict in eastern Ukraine since 2014.

But Germany also has the closest economic ties to Moscow of any major Western power, buying half of its natural gas from Russia. This has long given Berlin a strong incentive to maintain harmonious relations with Moscow. Read more

And Germans, with a long history of pacifism since World War II, are much less likely to support a hardline military approach than their British, French or American peers.

The crisis is the first big test of foreign policy for Chancellor Olaf Scholz, who took office last year after 16 years under Angela Merkel, and who faces divisions within his coalition over how to respond to Russian pressure.

Merkel, a center-right politician from Germany’s former Communist East, was known for her tough but pragmatic approach to Russia, often taking a hardline policy on human rights and Ukraine, while opening up the way to gas pipelines.

Scholz’s centre-left SPD has a history of promoting closer ties with Russia, including business ties: the SPD’s last chancellor, Gerhard Schroeder, went straight from politics to a career as a corporate lobbyist Russian energy. He is now chairman of the board of the Russian oil company Rosneft.

Scholz’s Junior Green and Liberal coalition partners are used to favoring harder lines, but the coalition has had to iron out any differences in public.

Ordinary Germans are almost twice as likely as Americans to want greater collaboration with Russia, according to a 2020 Pew poll. Another poll released last month by Civey found that more than half of Germans in East and 35% of West Germans favor a collaborative approach, while only 22% of Germans favor a confrontational approach.

“It’s not just specific to Russia – it has a lot to do with how Germans view military power as not only evil but also useless,” said Marcel Dirsus, a nonresident researcher at the Institute of security policy of the University of Kiel. “And many believe that many recent Western military actions have been a failure that has produced disastrous consequences.”

As she strolled down Karl Marx Allee in Berlin, retired East German accountant Christina Mahler, 84, said she agreed with the ousted navy chief’s remarks that the views of Russia were important.

“We need Russia and we shouldn’t provoke it like we do,” she said. “We’ve started two world wars – we shouldn’t be delivering arms to anyone. I’ve been through one, I know what I’m talking about.”

Last year, Germany reached an agreement with the United States paving the way for the reopening of the pipeline. And Berlin has pushed back on some proposals for tougher sanctions, including disconnecting Russia from the SWIFT payment system.

“Germany is doing this primarily for its own good,” said 26-year-old Kyiv resident Victor.

“Apparently Germany thinks it’s better for them that way. Apparently Russia is a bigger and better ally than us. You have to see it from (Germany’s) perspective.”

Additional reporting by Felix Hoske in Kyiv and Paul Carrell in Berlin; edited by Peter Graff

2022-01-25
Previous Post: “Which side are you on? » : Russia’s threat of war shakes Ukraine’s confidence in its relations with Germany | Military
Next Post: Ukraine’s Jews prepare to commemorate the Holocaust as Russian war drums thunder