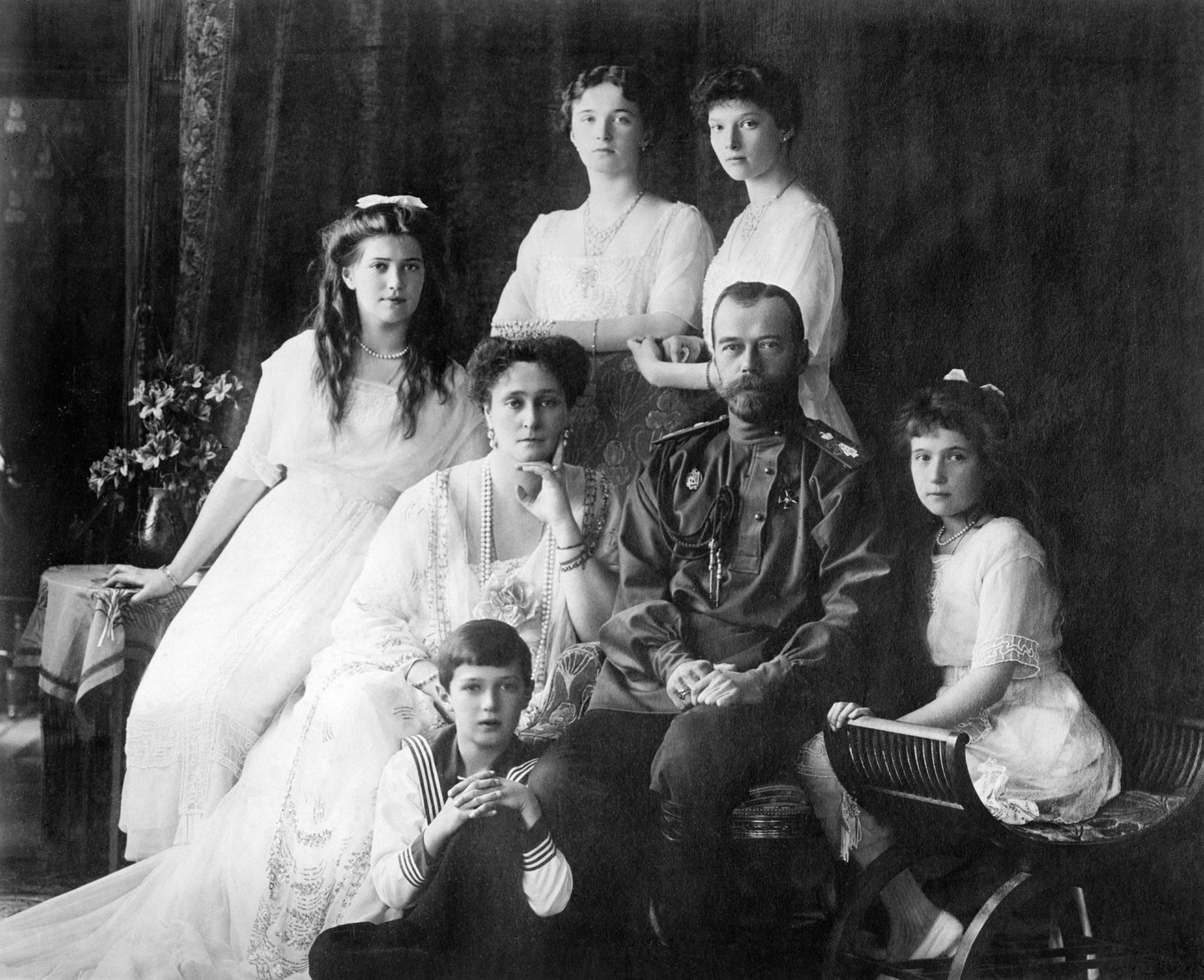 “Now that the lush and prosperous years had come to Russia, the last thing she needed was war; they should have just said a Requiem mass for this Archduke Franz Ferdinand, after which the three emperors of Germany, Austria and Russia should have had a glass of vodka at the vigil and forgotten the whole affair.

The events that took place in Russia from the fall of 1916 to the fall of 1917, including the collapse of the Tsarist regime and the rise of Bolshevism, bent the arc of history unfathomably and continue to influence Russia’s politics and relations with the rest of the world. the world today. To commemorate the 100th anniversary of these earth-shattering events, we begin today with a series of articles that will highlight how the Russian Empire, ruled by the Romanov dynasty for over 300 years, transformed into the communist Soviet Union.

By the fall of 1916, Russia had been at war with the Central Powers – Germany, Austria-Hungary and the Ottoman Empire (modern Turkey) – for more than two years. During the 20 years he had been on the throne before World War I, Nicholas II had faced pressure to reform the absolute monarchy he had inherited from his father, Alexander III, in 1894. At the time of his accession, the 26-year-old tsar seemed to embrace progress and modernity. He authorized the Paris Pathé company to film his 1896 coronation procession and his subsequent state visits to European leaders with his wife, Empress Alexandra and infant daughter, Olga, became the first royal tour documented by cameras. news. Throughout his reign, Nicholas showed concern for his image at home by taking advantage of the emerging mass media of the early 20th century. When the Romanov dynasty celebrated its 300th anniversary in 1913, Nicholas commissioned an authorized biography of himself, and photographs of his family appeared on postcards.

His domestic policies, however, betrayed Nicholas’ guiding principle of maintaining autocratic rule. In an 1895 speech to representatives of the nobility and municipal officials, the Tsar said: “Voices have been raised for people carried away by foolish dreams of participating in the affairs of government. Let everyone know that I will uphold the principles of autocracy as firmly and unyielding as my unforgettable late father. The speech shattered the hopes of elected municipal officials who were hoping for a gradual transition to a system closer to a constitutional monarchy.

Nicholas was forced to enact further reforms, including the creation of the representative assembly called the Duma, after the defeat in the 1904 Russo-Japanese War and the massacre of workers protesting outside the Winter Palace in St. Petersburg the next year. Despite the creation of the Duma, Nicholas still retained the title of autocrat, the ability to appoint his ministers, and the right to veto motions proposed by the assembly. Nevertheless, the reforms occurred gradually during this first decade of the 20th century. The Russian peasantry, which had been freed from serfdom by Nicholas’ grandfather, Alexander II, in 1861, began to receive individual land holdings, freeing them from traditional peasant communes. These land reforms were designed to foster a conservative, monarchist peasantry that would serve as a counterweight to the urban workers, who repeatedly demonstrated for better working conditions and pay and were more likely to be drawn to Bolshevism.

The term Bolshevism comes from the Russian word bolshinstvo, meaning majority. Adopted by a breakaway faction of Russian revolutionaries advocating a Marxist-inspired working-class uprising, the Bolsheviks had their ideological roots in the 1848 pamphlet The Communist Manifesto, written by Karl Marx and Friedrich Engels. The group’s leader, Vladimir Lenin, found in his supporters a smaller, more disciplined party that was determined to turn World War I – “an imperialist war” – into a broader class war with workers fighting the “bourgeoisie ” and the aristocracy.

The Russian Empire’s involvement in World War I began when Austria-Hungary issued an ultimatum that threatened Serbian sovereignty following the assassination of Archduke Franz Ferdinand, the heir to the throne. from Austria. Russia, as the traditional protector of other Slavic peoples, including the Serbs, mobilized its armies. The conflict in the Balkans spread to most of Europe as Russia’s allies in the Triple Entente – France and Britain – also went to war with the Central Powers.

The outbreak of war sparked a surge of patriotism that initially strengthened the Tsar’s rule. Sixteen million soldiers were mobilized on the Eastern Front during the conflict, including 40% of all men between the ages of 20 and 50. Despite the enthusiasm and rapid mobilization, the Russian war effort was plagued with problems from the start. Salaries for munitions factory workers did not keep up with the rising cost of living, exacerbating the discontent that existed before the outbreak of hostilities. Industrial and transport infrastructure was insufficient to provide the necessary supplies for the troops.

War Minister Vladimir Suklominov was accused of corruption, and Nicholas eventually removed him from his post for failing to provide the necessary ammunition, sentencing him to two years in prison. (Suklominov’s actual guilt remains a matter of historical debate.) Russia suffered a disastrous defeat at the Battle of Tannenberg in the first weeks of the war, with 78,000 Russian soldiers killed and wounded and 92,000 captured by the Germans. The following year, Nicholas assumed direct control of the army as commander-in-chief, placing himself personally responsible for subsequent defeats.

A chance to end the stalemate on the Eastern Front came in the summer of 1916. Representatives from Britain, France, Russia and Italy (who joined the war alongside the Triple Entente in 1915) agreed at the Chantilly Conferences of 1915 to undertake coordinated action against the Central Powers. Under the command of General Alexei Brusilov, Russian shock troop units broke through Austro-Hungarian lines in what is now western Ukraine and incited Germany to divert forces from Verdun onto the western front. The victories achieved by the Brusilov Offensive cost a million Russian troops and finally came to an end in September 1916 due to continuing supply shortages in the Carpathians.

While Nicholas suffered military setbacks on the Eastern Front, his wife, Alexandra, was overwhelmed by challenges on the home front. The importance of the railways in transporting military supplies to the front disrupted the transportation of supplies to the towns, and apart from sugar no other goods were subject to a regimented rationing system. Alexandra and her two eldest daughters, Olga and Tatiana, were trained as nurses, staffed hospital formations and established committees to meet the needs of war widows and orphans and refugees. (In Boris Pasternak’s epic, Doctor Zhivago, Lara goes to the front in search of her husband as a nurse on board a Tatiana hospital train). The philanthropy of imperial women, however, could not make up for the lack of a coordinated government response to the needs of thousands of wounded soldiers, military families, and displaced persons.

Nicholas and Alexandra also struggled with family challenges; their most pressing concern was Alexei’s health. The heir to the throne suffered from haemophilia, a disease common among the descendants of his great-grandmother, Queen Victoria of Great Britain, which prevented his blood from clotting normally. In their 1916 correspondence, the royal couple expressed relief that Alexei had recovered from a life-threatening nosebleed. The tsarina turned to religious healers, including a wandering holy man from Siberia named Grigori Rasputin, who became known as the “mad monk” despite never entering a holy order and being in married and father of three children. Before the war, Rasputin provided spiritual guidance to the imperial couple and prayed for the recovery of the heir to the throne. During the war, however, Rasputin provided Nicholas and Alexandra with political advice. When Suklominov was released from prison after just six months, the Russian public blamed Rasputin’s influence.

Because Alexei’s hemophilia was kept secret, little could be done to quash rumors circulating about Rasputin, who had an unsavory reputation due to his drunkenness and feminization. Alexandra, in turn, became a deeply unpopular figure due to her family relationship with Kaiser Wilhelm II of Germany (they were first cousins) and her perceived dependence on Rasputin.

Under these conditions, the Duma assumed the role of critic of the policy of the tsarist regime and demanded even more reform. In November 1916, Vladimir Pourishkevitch, a reactionary deputy known for his militant anti-Bolshevism, gave a speech in the Duma denouncing what he described as a “ministerial leapfrog” in which Nicolas, under the influence of Alexandra herself influenced by Rasputin, removed relevant ministers from office and replaced them with unqualified figures approved by Rasputin. Purishkevich concluded his speech with these words: “as long as Rasputin is alive, we cannot win”. Prince Felix Yusupov, Russia’s richest man and husband of Nicholas’ niece Irina, was impressed by the speech and began plotting Rasputin’s murder.

(Editor’s note: For the purposes of these columns, we will use the dates of the Gregorian calendar, which we use today, but which Russia did not begin to use until February 1918. Therefore, the Bolsheviks seized power on November 7, 1917, even though it was called the October Revolution.)

Next: December 1916: The murder of Rasputin