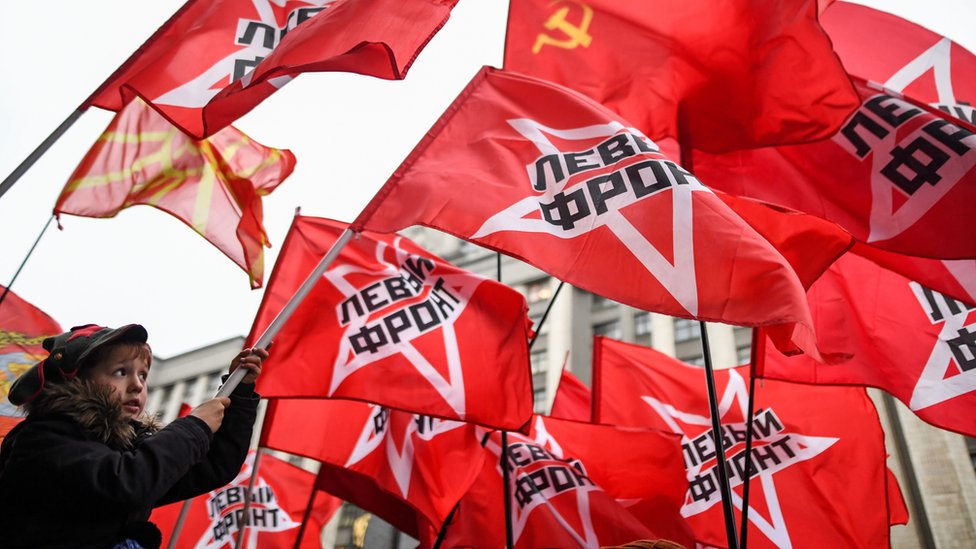 What is the Russian revolution?

This month the world remembers the 100 years since the Russian revolutions of 1917.

The revolutions in Russia are incredibly important historical events.

They marked the start of a new political system in action – a system known as communism.

Communism ended up having a great influence on the history of the world. You can read more about what happened here. 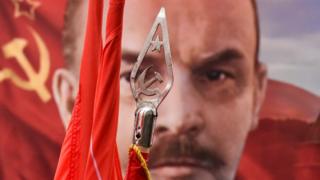 The communist symbol is a sickle and a hammer, which were considered tools of the working class

For three hundred years Russia was ruled by a royal family – the Romanovs.

The Romanovs had been an incredibly powerful family, ruling over one sixth of the face of the world. But the ruler of the time – Tsar Nicholas II – was considered by many to be a very bad leader.

On February 24, riots broke out in the capital St. Petersburg. People were angry that there was almost no food to eat and the First World War was going very badly.

What is a tsar?

A tsar is a ruler of Russia, similar to a king. It comes from the Roman word Caesar.

A queen is known as the tsarina.

Tsar Nicholas II decided he could no longer rule in Russia, as many soldiers refused to obey his orders to quell the riots. He resigned on March 2.

A group of people called the temporary government took control of the country.

The Russians hoped that life would be much easier and fairer now that the Romanovs were gone. However, many problems remained and in October there was a second revolution.

In many ways, this revolution was even more important than the first revolution because it launched a whole new political system that had never been tried before.

This system is called Communism – and the first Communist leader of Russia was a man called Vladimir Lenin.

Read on to learn more about exactly how this happened.

Why was there a revolution?

There are a lot of different reasons why there was a revolution in Russia – mainly because of the way the country was run.

Many Russians thought life was hard and unfair. It seemed that a small number of the rich and powerful had everything, while the poorest had nothing.

They thought that the Tsar was not doing much to make things fairer for them.

In 1905 there was a demonstration in front of the Winter Palace in St. Petersburg against Tsar Nicholas II. It was because people wanted more rights and better living and working conditions.

Despite the peaceful nature of the demonstration, the demonstrators were attacked by Palace Guard soldiers in St. Petersburg. This day is now known in Russian history as Bloody Sunday.

Many people blamed the Tsar for the attack. In order to regain the trust of the people, Nicholas created a new organization called La Douma.

It was supposed to help make things fairer and empower the people.

However, he did not keep his promises. He shut down the Duma when it did things he didn’t like, and the Duma had very little real power in Russia. 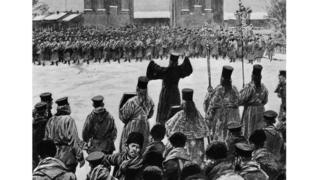 An illustration of peaceful protesters meeting with St. Petersburg police on Bloody Sunday

Over the next ten years there were more problems for Russia under the reign of Tsar Nicholas II.

In 1914, Germany declared war on Russia. This war – First World War – has become much bigger and many other countries have been involved.

Many Russian soldiers were killed in this war and Russia lost important battles. The army also lacked uniforms, food and weapons to fight.

At home there were even more problems. In particular, there were food shortages in the cities – people were hungry, cold and food prices were rising.

The Tsar also made the decision to lead his armies, and he left his wife, the Tsarina Alexandra, in charge of Russia while he was at the front.

It was an unpopular decision because the Czarina was German and was not well liked by the people.

She was also considered to be under the influence of Rasputin – a kind of religious teacher – who was generally hated by many people in Russia – rich and poor alike. 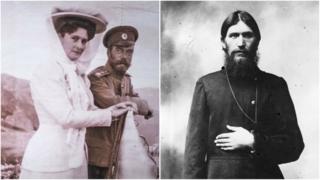 The first revolution: the end of the Romanovs

In February 1917, many Russians were fed up. Riots break out in St. Petersburg.

The troops of Tsar Nicholas II joined in the riots. The Tsar had no choice but to withdraw.

This ended 300 years of Romanov rule in Russia and a new government was put in place, called the Temporary government.

It was supposed to be a new start for Russia, but there were still more issues to come. 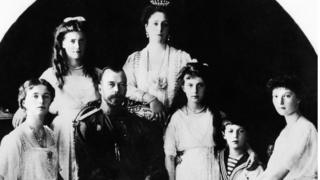 The interim government has said it wants to create a more just society, but there are many issues that need to be addressed.

First, Russia was very poor and a lot of people in the cities were hungry.

Second, they were still at war with Germany, which cost a lot of money.

The new government has struggled to organize itself. There were a number of disagreements over how things should be handled.

He did very little to help the people during the first months of power and continued to fight in the war against Germany. 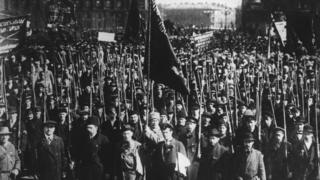 A group of demonstrators gather in Palace Square, Moscow in May 1917

Vladimir Lenin knew how unhappy the Russian people were.

He promised them many things they wanted – his slogan was peace, bread and earth. This promise made him very popular.

Lenin was the leader of a group of revolutionaries called the Bolsheviks. The Bolsheviks wanted to bring in a new political system called Communism in Russia.

Until this point, communism had never been tried before. 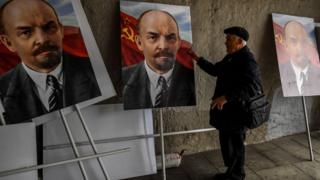 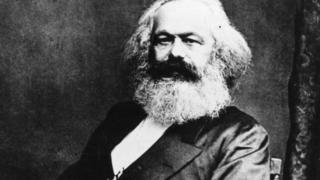 Communism is an idea created by a man called Karl Marx.

But the ideas behind communism divide people across the world to this day.

For some, communism is an idea that can lead to a more just society.

But millions of people have been killed or imprisoned under the Communist rulers.

It also often failed to deliver the changes promised to countries that tried it.

As you may have already guessed, the Russian revolutions were very complicated and there were lots and lots of people involved!

Here is a quick guide to the key people who participated in the revolution and the roles they played.

Lenin was the first Communist leader in Russia and the leader of the Bolshevik revolutionaries.

He was a radical thinker and believed that a Communist revolution would help bring equality to Russia.

Many Russians remember him as a great leader and liberator, but for others, his government was seen as authoritarian and cruel, as he imprisoned and killed people who did not agree with him. 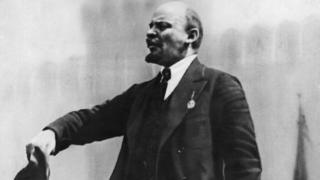 Second behind Lenin, Trotsky was intelligent and a great orator. He knew how to motivate crowds.

He was a rival of another Russian revolutionary, Joseph Stalin. Both wanted to take control of Russia after Lenin’s death in 1924. 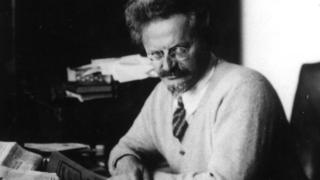 Recognized as one of the most ruthless rulers in the history of the world, Stalin’s name means “man of steel.” He took over the Communist Party after Lenin’s death.

While many of his decisions helped the Soviet Union revert to being a great world power, his government was seen as very controlling and he ruled the country as a dictator.

Millions of people would die during his reign, but he also led the Soviet Union to victory in World War II. 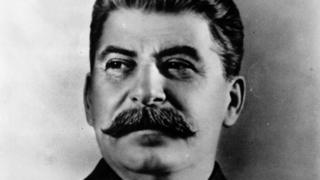 After the seizure of power by the Communist Party, Russia and some countries it controlled were renamed USSR – the Union of Soviet Socialist Republics. You might sometimes hear him call the Soviet Union.

During its years as a communist state, Russia had a huge impact on the rest of the world.

Years after the October Revolution in Russia, many other countries became Communists, including China, North Korea and Cuba.

Over time, a division developed between the Communist countries and other countries, such as the United States.

This division was known as Cold War and lasted a very long time but ended in 1991.

The USSR existed as a communist state from 1922 to 1991, when the Communist Party ended its rule.

Russia is now a republic, with a president called Vladimir Poutine.

Why are we marking the October Revolution in November?

The October Revolution took place on October 24 and 25.

However, the world is celebrating 100 years since this happened now – in early November – because in Russia in 1918 there was a change in the calendar.

It went from the Julian calendar to the Gregorian calendar, which we use today.

It means the dates have changed a bit which is why the anniversary is marked now.

2018-06-26
Previous Post: Marxists return to the Russian Revolution
Next Post: Russia’s arms make it “a country to be reckoned with”