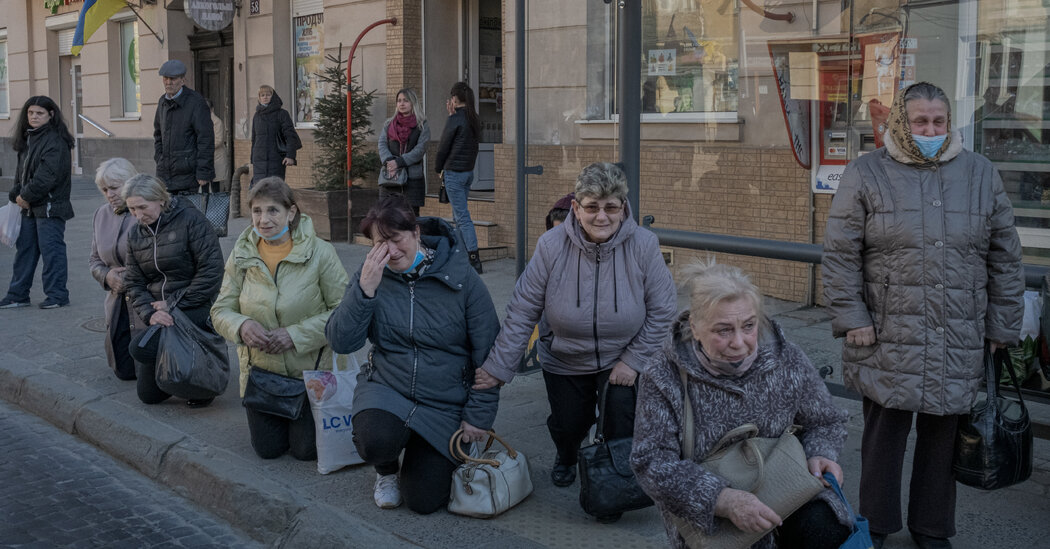 What happened on day 49 of the war in Ukraine

On Wednesday, investigators from nearly a dozen countries scoured bombed-out towns and freshly dug graves in Ukraine for evidence of war crimes, and a wide-ranging investigation by an international security organization detailed what she called “clear patterns” of human rights abuses by Russian forces.

Some of those atrocities could amount to war crimes, say investigators with the Organization for Security and Co-operation in Europe, who have reviewed myriad reports of rapes, kidnappings and attacks on targets civilians, as well as the use of prohibited ammunition.

Civilians were still bearing much of the brunt of the seven-week-old invasion on Wednesday as Russian forces, massing for an eastern assault, shelled Ukraine’s second-largest city, Kharkiv, hitting a building .

In an hour-long phone call with Ukrainian leader Volodymyr Zelensky, President Biden said the United States, already a major supplier of defensive armaments to Ukraine, would send an additional $800 million in aid military and other security assistance. The package will include “new capabilities tailored to the broader assault we expect Russia to launch into eastern Ukraine,” Biden said in a statement.

US officials said on Wednesday that the United States, by helping Ukraine prepare for such an assault, had increased the flow of intelligence to the Ukrainian government regarding Russian forces in eastern Ukraine and the peninsula. of Crimea, which Russia seized from Ukraine eight years ago. The administration is also considering sending a senior official to Ukraine’s capital Kyiv in the coming days as a sign of support for the country, according to a person familiar with the internal discussions.

Allegations of war crimes are notoriously difficult to investigate and even more difficult to prosecute. It is rare for national leaders to be indicted, and even rarer for them to end up in the accused’s chair.

But the war in Ukraine could turn out differently, some experts say, and momentum has been building to hold Kremlin leaders accountable.

An International Criminal Court investigation into possible war crimes has been underway for the past month, and a number of countries have been seeking ways for the United Nations to help create a special tribunal that could prosecute Russia for this. called the crime of aggression. Other possibilities include trying Russians in the courts of other nations under the principle of universal jurisdiction, the legal concept that certain crimes are so serious that they can be prosecuted. everywhere.

Part of the motivation for accountability is the revulsion in Europe and much of the world at the behavior of President Vladimir V. Putin’s forces, including the reported executions of linked civilians and other atrocities.

War crimes experts also point to technological advances in forensic tools like facial identification software that are unavailable to those investigating past conflicts, and the large number of investigators on the ground in Ukraine. – above all, with the blessing of the government. A dozen French investigators joined the investigations this week.

“There will be prosecutions, and probably all over the world,” said Leila Sadat, a professor of international law at Washington University in St. Louis and a longtime adviser to the chief prosecutor of the International Criminal Court on the crimes against humanity. “Ukraine is currently crawling with war crimes investigators.”

Still, experts have warned that the process will be slow and that any first indictments will most likely be directed against lower-ranking Russian officials and members of the armed forces. Russia, which called the charges fictitious or baseless, is not expected to cooperate with any prosecution.

The report released Wednesday by the Organization for Security and Co-operation in Europe, a 57-member organization based in Vienna that includes Russia, Ukraine and the United States, is one of the first in-depth studies of violations human rights during The Russian offensive against Ukraine.

Investigators looked at some of the war’s most notorious attacks and other acts of violence, including the Russian bombing of a theater and a maternity hospital in the besieged city of Mariupol, both described in the report as crimes apparent war.

They also delved into accounts of other horrific, albeit less visible, acts of violence. “There are allegations of rape, including gang rape, committed by Russian soldiers in many other parts of Ukraine,” they wrote.

But often they were blocked.

Russia refused to cooperate with the three-person investigative team, making it “impossible for the mission to take into account the Russian position on all relevant incidents”, the report said.

Investigators found that Ukrainian forces were also guilty of some abuses, particularly in the treatment of prisoners of war. “Violations committed by the Russian Federation, however, are far greater in nature and scale,” their report said.

Michael Carpenter, the US ambassador to the OSCE, said the report “documents the catalog of inhumanity perpetrated by Russian forces in Ukraine”. The European Union issued an equally positive assessment.

“This war is not just being fought on the ground,” the bloc said in a statement. “It is clear that the Kremlin is also waging a shameful disinformation campaign in order to hide the facts of Russia’s brutal attacks on civilians in Ukraine. Reliable information and the gathering of facts have therefore never been more important than today.

The Kremlin’s own mission to the OSCE called the findings “baseless propaganda”.

On Tuesday, even as Ukrainian authorities dug up bodies in full view of international journalists and other observers, Mr Putin called the atrocities “fake” that had been painstakingly staged by the West.

Standing near the site of two mass graves on Wednesday, Ukraine’s Attorney General Iryna Venediktova said there was an obligation to both find out the facts and do so in a transparent way to counter Russian disinformation. .

“When you see corpses here, on the other side, from the Russian Federation, they say it’s all fake, it’s all our theatre,” Ms Venediktova said.

Ukrainian prosecutors and the team of newly arrived French experts this week exhumed bodies from mass graves in Bucha, a suburb of kyiv, where hundreds of civilians were killed during the brief Russian occupation of the area. The French government said its team included ballistics and explosives experts and had the capacity to do rapid DNA testing.

Evidence from the French investigation and others involving several different countries will be handed over to the International Criminal Court, which began investigating possible war crimes a week after the February 24 invasion. Although Ukraine was not part of the agreement that created the court two decades ago, it granted the court the power to investigate and prosecute in this dispute.

Investigators say they are determined to show the world the reality of war.

“They can see everything. They can see the situation here: real graves, real corpses, real bombings,” Ms Venediktova said. “That’s why for us this moment is very important.”

The OSCE report describes a series of subterfuges by Russian forces, including the use of Red Cross emblems, white flags, Ukrainian flags and civilian clothing. And the organization’s investigators have expressed concern that both sides may be holding more prisoners than has been revealed.

On Wednesday, President Zelensky spoke directly about one of them: Viktor Medvedchuk, a Ukrainian politician and ally of Mr. Putin who was arrested this week. Mr. Zelensky offered to exchange him for Ukrainians held captive by Russian forces.

Even as many world leaders agreed that the war crimes charges were justified, there was some disagreement about how to characterize Russia’s actions. Some leaders, including Mr Biden, have started to use the term “genocide” – an escalation in his rhetoric. On Wednesday, French President Emmanuel Macron dissented.

“What is happening is madness, it is unprecedented brutality,” Macron said. But, he said, “Genocide has a meaning. The Ukrainian people and the Russian people are brothers”.

“I’m not sure that an overstatement of words serves the cause,” he said.

The war crimes report came amid signs that Russia’s invasion may have backfired in at least one aspect. Mr Putin has long opposed NATO’s eastward expansion into the former areas of the Soviet Union, describing it as a fundamental threat to Russia. But on Wednesday, two militarily non-aligned countries, Finland and Sweden, said they were seriously considering joining the alliance.

Lawyers have not ruled out the possibility, one day, of an indictment of Mr. Putin, who has already been castigated as a war criminal by certain Western leaders. And if Mr Putin were to face criminal charges in a court outside Russia, it would likely mean he would have to restrict his international travel to minimize the risk of possible arrest if he ventured beyond the borders. borders of Russia.

David Crane, a jurist at Syracuse University and chief prosecutor of the Special Court for Sierra Leone, an international war crimes tribunal that convicted former Liberian President Charles G. Taylor, said he believes the International Criminal Court or another judicial body would find legal grounds to indict the Russian president.

And even if Mr. Putin is never arrested and remains Russia’s leader, he said, the legal and diplomatic consequences of a war crimes indictment would seriously damage his credibility.

It would be as if ‘there was like a mark of ash on his forehead,’ Mr Crane said. “There are no good options for him.”