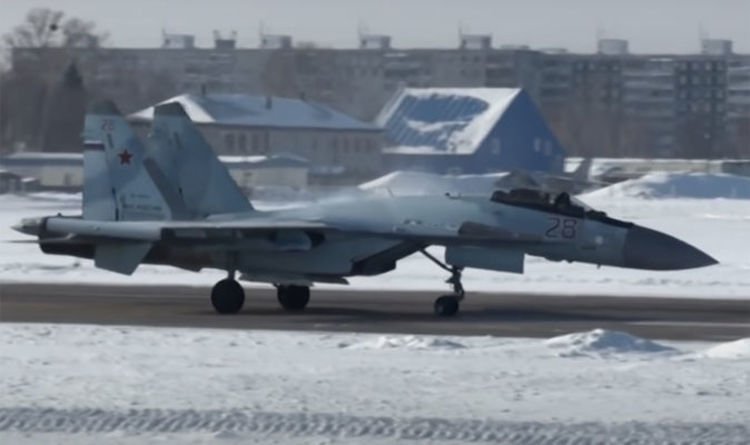 Fears of a Russian invasion and strike on Ukraine intensified today after new footage showed the country’s SU-35S fighter jets deployed in Belarus. The deployment in Belarus, which borders Ukraine, could allow Moscow to threaten Kiev, the Ukrainian capital, according to Western officials and analysts. Footage released by the Russian government shows several SU-35S fighter jets being transported from Russia to Belarus.

Moscow says the deployment is simply part of the countries’ joint military exercises – but these won’t take place until February 10.

Russia has already amassed more than 100,000 troops near its border with Ukraine – but still denies it is planning an invasion.

In fact, President Vladimir Putin has deployed more than 60 battalion battlegroups – more than a third of his country’s total available force.

The manager said: “What concerns us is the overall picture. This is the gathering of 100,000 troops along Ukraine’s borders, combined with the movement of forces into Belarus over the weekend.

“These numbers are of course beyond what we would expect in terms of a normal exercise.”

Belarus’ latest move appears to be part of a strategy to encircle Ukraine.

It comes as negotiations between the United States and Russia on withdrawing operations appear to be at an impasse.

President Putin coordinated the deployment of troops with ultimatums to the West to prevent Ukraine from joining the NATO military alliance.

In response, the Russian Foreign Office claimed Britain was “circulating misinformation” and urged it to “stop spreading nonsense”.

US officials, including the chairman of the House Intelligence Rep. Adam Schiff, claimed that British intelligence reports showed “the imminent and real threat of a massive Russian invasion“.