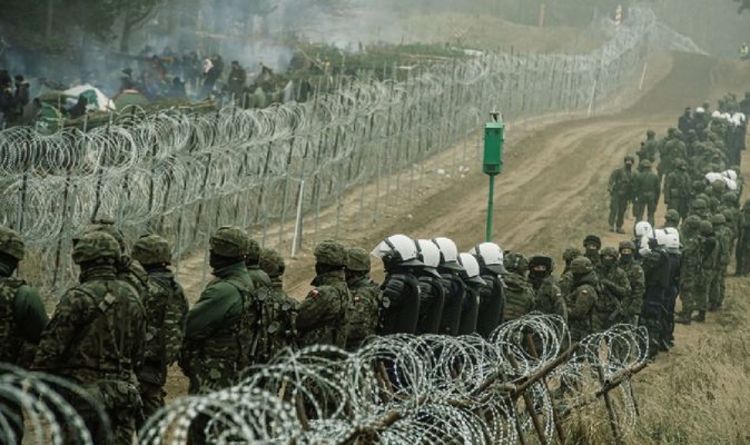 Speaking to talkRADIO on Monday, former Defense Minister Sir Gerald Howarth supported the comments of the Chief of the Defense Staff, General Sir Nick Carter, who warned on Saturday that there was now “greater risk” of accidental war with Russia than at any time during the Cold War. It comes as chaos has gripped the Belarusian border as President Alexander Lukashenko is reportedly arming migrants to destabilize Europe.

Sir Nick Carter added that “the escalation leading to miscalculation” was “a real challenge” throughout the current crises.

While Sir Gerald said there was a “very real risk” of engagement along the Belarusian and Polish border with the arrival of Belarusian and Russian soldiers who conducted military exercises in the area as a demonstration by force.

On top of that, Belarusian and Russian troops were filmed last week using strobe lighting and laser pens pointed at Polish and NATO troops to distract them as they destroyed a section of the border wall.

The Times newspaper also reported how the soldiers also gave the migrants (who are camping at the border) tear gas to throw over the wall.

JUST IN Politics have led to thousands of migrants stranded at the Polish border in freezing weather.

The former defense secretary went on to point out how a miscalculation of sending NATO troops, including 150 British troops, to the border to resolve the chaos could end in war.

He also noted how fears of an invasion of Ukraine by Russia signify any misunderstanding of the migrant crisis and the management of it is a major concern, which he said could trigger retaliation. of Russia in the Donbass region of Ukraine.

Sir Gerald said: “The circumstances today are very different from the circumstances of the Cold War, when there was a stalemate between the United States… and the Soviet Union.

“Today what we are seeing is a model of Russian behavior under President Putin.

He criticized how vital it is for the West to make Russia understand that “if they cross the line then there will be retaliation” as he called on the Western allies to take a stand against Putin and Lukashenko .

The comments come as the Kremlin has been accused of encouraging Belarus to bring in a new wave of African and Middle Eastern migrants and send them across the border into Poland and the Baltic states. This policy has led to thousands of migrants stranded at the Polish border in freezing weather.

But President Putin instead retaliated by blaming the Briton for the migrant crisis.