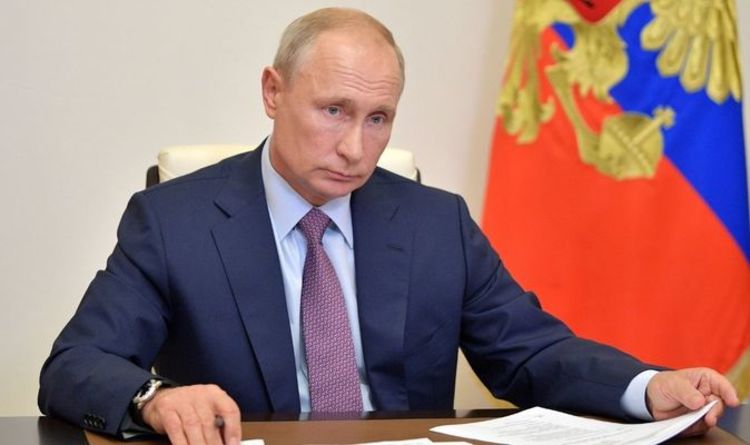 The troubled country’s foreign minister was joined by his counterparts from Lithuania, Latvia and Estonia – all NATO allies – in strongly condemning Russia’s military escalation in eastern Russia Ukraine. Dmytro Kuleba’s warning came after the United States turned around by sending two warships to the Black Sea. President Joe Biden’s change of mind came a day after President Putin said Americans should avoid the region “for their own good.”

He said: “Today all four of us can firmly state that we condemn the worsening of the situation by Russia, the actions and statements by Moscow aimed at escalating the tensions.

“The world is on the side of Ukraine and international law, and this is one of the elements to prevent Russia from acting recklessly.”

U.S. and NATO allies were alarmed by the large build-up of Russian troops near Ukraine and in Crimea, the peninsula Moscow annexed from Kiev in 2014.

Ukraine warns Putin there will be “very painful” consequences if he does not withdraw his troops (Image: GETTY)

German Chancellor Angela Merkel and Mr Biden on Wednesday called on Russia to withdraw its troops and ease tensions in the troubled region.

Ukrainian President Volodymyr Zelensky called on Europe for more support in his country’s stalemate with Moscow.

As Kiev pushes for full NATO membership, the alliance shows little sign of honoring the request.

On Friday, Zelensky will meet with French President Emmanuel Macron in Paris to discuss the conflict in the Donbass region.

In an interview with French daily Le Fiagro, Zelensky said: “If the EU and Emmanuel Macron see us as a true member of the European family, they must act accordingly.

He said that France, Germany and Brussels had already helped Ukraine a lot, especially with sanctions against Russia.

He added: “The discussion must also take place on security issues.

Ukraine and Russia have shared blame over rising violence in the region, where Ukrainian troops have fought Russian-backed forces in a conflict that Kiev says has claimed 14,000 lives since 2014.

On Thursday, the United States announced a new round of sanctions against Russia.

They beat the ruble and government bonds, but financial analysts said the sanctions would not have a significant negative impact on Russia’s budget and markets in the long run.

President Biden said he told his Russian counterpart that the United States could have gone further with the sanctions, but he chose not to.

The two spoke by phone on Tuesday, with Mr Biden telling Mr Putin he was concerned about the reinforcement of Russian troops at the Ukrainian borders.

According to the White House, there are now more Russian soldiers on its neighbor’s eastern borders than at any time since 2014.

A senior US general in Europe has said there is a “low to medium” risk that Russia will invade Ukraine in the coming weeks.

Air Force General Tod Wolters declined to explain the intelligence behind his assessment, which does not suggest that the U.S. military expects a Russian invasion at this point, but does ‘does not exclude one or minimize the risk.

The conflict in Ukraine started in 2014 (Image: GETTY)

When asked by a lawmaker to estimate the chances of an invasion in the coming weeks, General Wolters replied, “Low to medium.”

Pressed by another lawmaker to explain whether that risk would change after this period, General Wolters kept his cards closed, saying, “The answer is, it depends.”

“And I should take every second of the day from then until tomorrow to give you a different answer.”