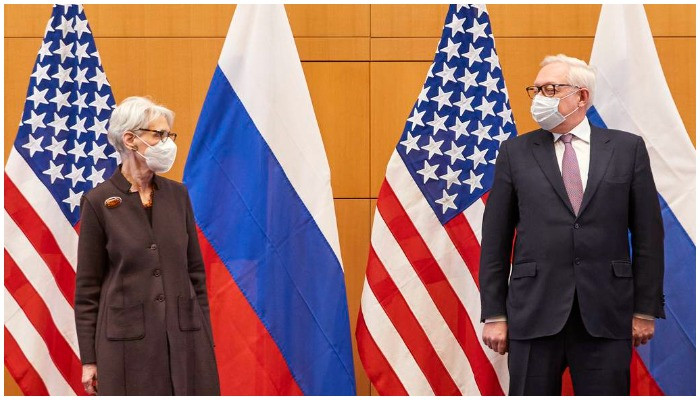 US-Russian war against Ukraine: a possibility?

These days, the world is witnessing a looming crisis involving Ukraine and Russia. There are growing fears that the crisis could escalate into a full-fledged war between Russia and the United States of America.

It is equally difficult for people to understand why this issue has rebounded now, and who will benefit the most from this crisis? After all, the Biden administration was supposed to launch a campaign against China, but instead, for now, it is going against Russia.

First, let’s focus on the timing of the Ukrainian crisis.

The problem has been compounded when the United States holds midterm elections and President Joe Biden’s popularity is on the decline. Currently, Biden is trailing far behind his hated Republican predecessor Donald Trump, who calls him “Sleepy Joe.”

In the current scenario, a tough stance against Russia will certainly bolster Biden’s domestic popularity. As a result, it could also improve the chances of Democrats, who are struggling to win Congress this summer.

The timing of this crisis is equally important for America’s most trusted ally, Europe.

In recent decades, some of the major economies of the European Union (EU) have turned to Russia for their energy needs. Currently, the EU imports 40% of its natural gas from Russia, with Germany being its biggest buyer in Europe.

Germany, the most industrialized country in the European Union, even resisted pressure from Washington and continued its connection with Russia via an economic artery known as Nord Stream 2 (NS2).

NS2 has the potential to be a game-changer for Germany. This 1,230 kilometer long gas pipeline is capable of doubling gas supplies from Moscow to Berlin (110 billion cubic meters per year).

If this relatively cheaper gas is pumped to full capacity, post-pandemic Germany will have an advantage in reaching new heights in industrial production.

The Nord Stream 2 gas pipeline starts from the Ust-Luga region in the Leningrad oblast in Russia and passes under the Baltic Sea to reach the Greifswald region in Germany. It crosses the territorial waters of Finland, Sweden and Denmark before reaching its final destination.

The three European countries above have granted full authorization for the project. Central European countries, including Austria, the Czech Republic and France, are also supporting the pipeline to meet their needs.

But Ukraine and Poland vehemently oppose it, since both countries earn billions of dollars in transit fees on other pipelines. For Poland, NS2 is a double disaster as this project has the potential to shatter Warsaw’s dream of becoming a regional gas hub.

For both Ukraine and Poland, Russia intends to militarize energy against their interests. This is why Kiev and Warsaw oppose Nord Stream 2 and insist that Moscow must continue to supply gas through existing pipelines.

By beating the drums of war, the United States of America intends to prevent Germany from obtaining gas supplies via the NS2.

In all scenarios, Washington will be the most advantaged by the crisis. To bolster defence, American companies are already selling weapons for billions of dollars to countries like Poland.

In addition, oil companies are getting much better prices and contracts for their LNG supplies to Europe.

On the contrary, rival Russia will certainly be under intense economic pressure. Even preparing for war will replenish all the gains made over the past two decades.

Chances are that Russian President Putin, who has turned a bankrupt country into a major power, will oversee the disappearance of the progress made during this period.

Berlin faces an uncertain future as it is virtually impossible for countries like Germany to ditch Russian gas and wait for needed supplies from America or its other allies.

Germany needs both infrastructure and time to change its dependency. Even then, he will not be able to buy gas at the prices offered by Russia.

German Chancellor Olaf Scholz’s Social Democrats (SPD) are heavily dependent on lower- and middle-class voters seeking cheaper gas to heat homes and affordable goods on the market. The escalation of the crisis will lead to a further rise in prices and the SPD could end up paying the political price.

For Ukraine, the escalation of the crisis has unprecedented consequences. Even war talks have crushed its economy and fearing the worst to come, Ukrainian politicians, bureaucrats and business leaders are fleeing the country for safety.

President Volodymyr Zelensky humiliates and curses them, but to no avail. In recent days, we see him pleading with the West to stop spreading panic by setting one deadline after another for a possible Russian invasion.

He knows that in this scenario there is less possibility of a Euro-Atlantic trajectory for his country.

War or no war?

It’s a million dollar question. Yet, based on the realities on the ground, some bets can be made with reasonable probability.

First, consider who can start war?

Ukrainian President Volodymyr Zelensky is in no position to start or stop the war. At best, he can try to avoid it.

Most European leaders are struggling to revitalize their post-pandemic economies. They know that the flames of war can also engulf their country. Moreover, they cannot afford the expected influx of five to six million Ukrainian refugees to their borders. For these reasons, we see European nations completely divided on the management of the crisis.

Russia may want a war but cannot afford it. The question is, why would he then have gathered more than 150,000 troops along the Ukrainian border?

Well, Moscow is simply trying to prevent the history of the world war from repeating itself in the 21st century.

Instead of going to war, Moscow would more likely like to follow Beijing, which has gradually progressed and is now establishing itself as an economic superpower.

Despite their good will, the United States of America is not in a position to wage this war either. His claims of possible false flag operations are hard to believe because Washington had also made such hollow claims in Syria.

Yet Washington can surely trap Russia.

The situation is the same in the Tom and Jerry cartoons, where Jerry tries to plant the plates on Tom and Tom tries to catch them before they fall.

2022-02-21
Previous Post: Ukraine-Russia War Will Impact Chicago: Crain’s Juice Forecast
Next Post: Pakistan on the front line of a war between Ukraine and Russia