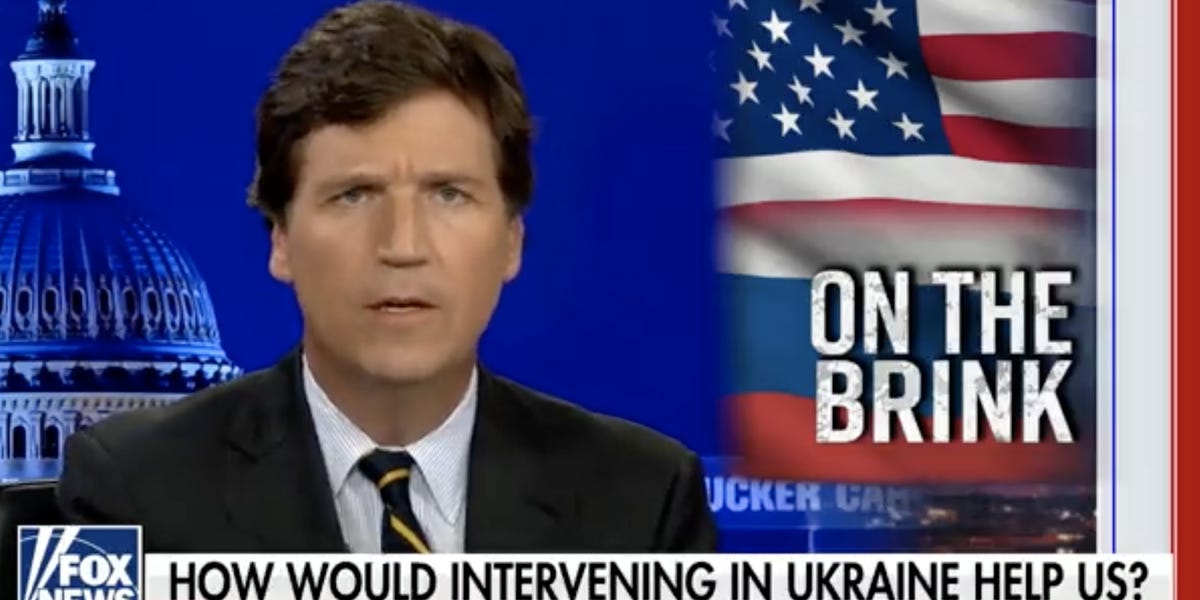 Fox News host Tucker Carlson accused part of the Republican Party of seeking to push the United States into a military confrontation with Russia.

Carlson’s claim was part of a series of sympathetic arguments he made as Russia conducts military build-up along its border with Ukraine, raising fears of conflict.

The host claimed on Tuesday that Russia’s actions were a defensive response to NATO aggression, drawing accusations he was encouraging Kremlin propaganda.

In the Wednesday night edition of his show, he turned his attention to those in the United States who he says are seeking to push the Biden administration toward conflict.

“It’s almost impossible to believe, but we’re actually getting closer to a hot war with Russia,” Carlson said, claiming that “you might wake up one morning and it’s 1914,” referring to the year when World War I broke out in Europe.

“The Republicans are doing nothing to stop this,” Carlson said. “In fact, they are making the weak and incompetent president to do more. ‘Oh, Biden is weak. He is not standing up against Vladimir Putin!’”

“You hear this constantly, including on this channel from Republicans. And the rhetoric is getting hotter and crazier and more out of touch with reality.”

Carlson played a clip of Republican Senator from Mississippi Robert Wicker, a member of the Senate Armed Services Committee, which said on Fox News on Tuesday that the United States should consider deploying troops, or even launching a nuclear strike in response to Russian aggression against Ukraine.

The host then asked how a conflict with Russia would serve American national interests.

Pushing his “America First” brand of conservatism and opposing US military actions abroad, Carlson has long been accused of over-sympathizing with Putin’s Russia.

The Russian leader has become an unlikely hero to some on the American right, who celebrate his nationalism and see him as a champion of Christianity.

Earlier this year, Carlson claimed he was hacked by the NSA after seeking to contact people around Putin for a possible interview with the Russian leader.