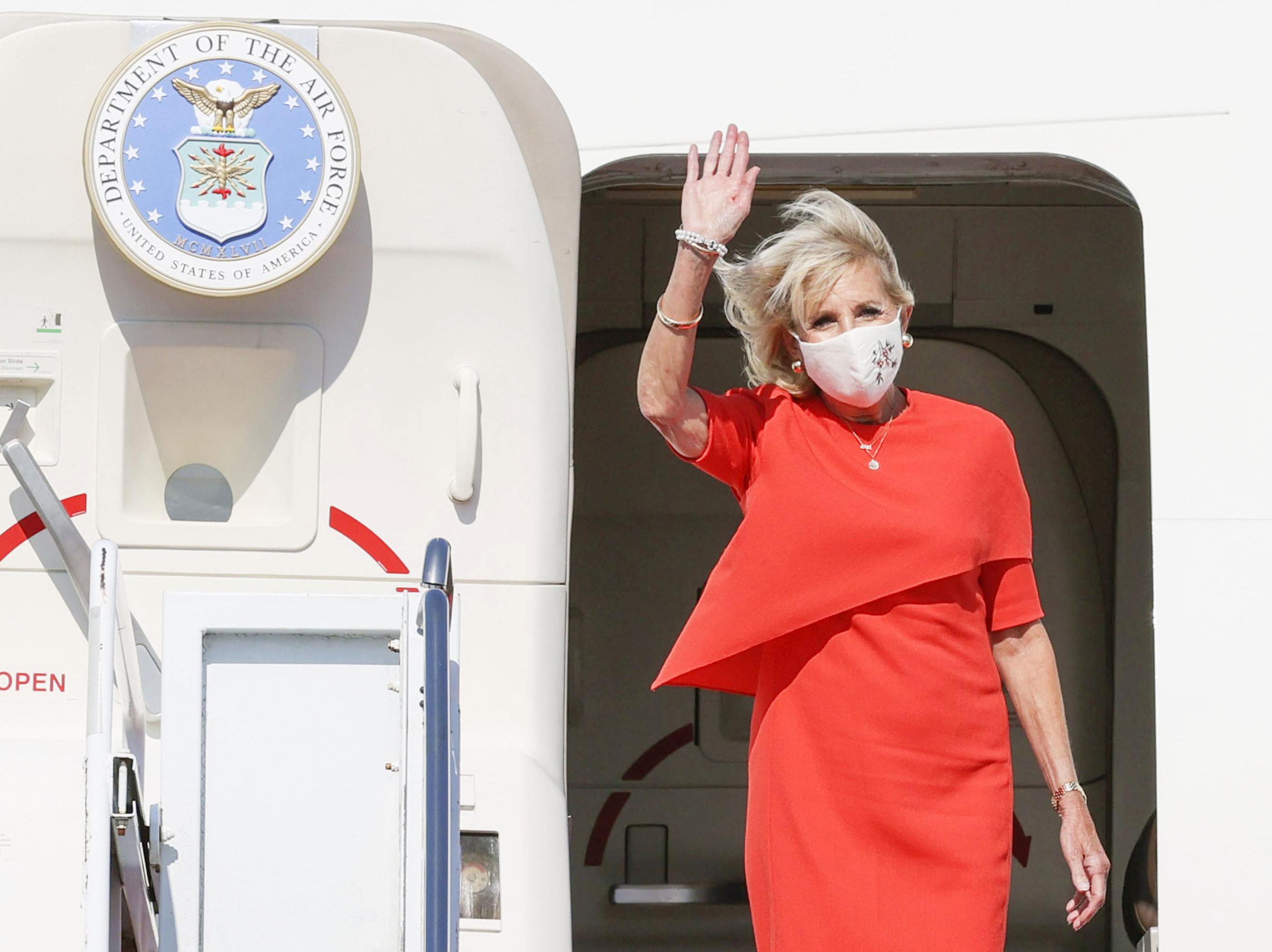 The latest news on the Tokyo Olympics, which are being held under severe restrictions after a year of delay due to the coronavirus pandemic:

About fifty protesters gathered in Tokyo to demand the cancellation of the Olympics.

The opening ceremony is scheduled for Friday evening local time.

Protesters gathered outside the Tokyo Metropolitan Government building chanting “no to the Olympics” and “saving lives”. They held up signs saying “cancel the Olympics”.

The Games, largely without spectators and opposed by much of the host nation, are taking place a year later than planned.

A day earlier, Tokyo hit a new six-month high in new COVID-19 cases as concerns grew over worsening infections during the Games. Yet the number of cases and deaths as a proportion of the population in Japan is far lower than in many other countries.

The opening ceremony will be held mostly without spectators to prevent the spread of coronavirus infections, although some officials, guests and media will attend.

Jill Biden organized a virtual meeting with several American athletes who will participate in the Tokyo Games.

The American First Lady is in Tokyo to support the athletes and attend the opening ceremony.

She spoke virtually with Eddy Alvarez, a baseball player and short track speed skater, and basketball player Sue Bird. Both will be the United States flag bearers at the opening ceremony. She also spoke with Allison Schmitt, four-time Olympic swimmer and mental health advocate.

Biden told the athletes they had given up a lot to be in Tokyo and were counting on the support of their family and friends.

On Saturday, she will dedicate a room in the residence of the head of mission to former US Senator Daniel Inouye, D-Hawaii, and his wife, Irene Hirano Inouye.

She will host a U.S.-Mexico Softball Watch Party at the U.S. Embassy for staff and their families, and cheer on U.S. athletes participating in several events before leaving Tokyo.

South African walker Lebogang Shange has been suspended for four years for doping and will miss the Tokyo Olympics.

The former African champion competed in the men’s 20 kilometer event on August 5. The Court of Arbitration for Sport ruled on the case in Tokyo.

Shange, 30, tested positive for the anabolic steroid trenbolone and was provisionally suspended in December 2019. His ban will expire before the Paris 2024 Olympics.

The 2014 European champion was entered in the event at the Tokyo Games. The heats begin next Friday. It is not known if Hussein will be replaced in the roster of 40 athletes.

The court of the Swiss Olympic body backdated the ban by a week from when Hussein was provisionally suspended. This suspension was not disclosed.

Tokyo Olympics organizers have reported 25 new cases of COVID-19. Three of them are athletes who were announced on Thursday.

There are 13 athletes among the 110 Olympic accredited people who have tested positive in Japan since July 1.

Three media workers from overseas to Japan have been included in the latest update.

Naomi Osaka’s opener in the Olympic tennis tournament has been postponed from Saturday to Sunday.

Organizers did not immediately provide a reason for the change. They only said the movement came from the tournament referee.

One of the reasons for the move could be that Osaka could have a role in the opening ceremony on Friday night. It wouldn’t give him much time to rest before a Saturday morning game.

Osaka is returning to competition for the first time in nearly two months after retiring from Roland Garros after the first round to take a mental health break.

She is one of the best Japanese athletes.

The World Anti-Doping Agency said several Russian athletes were kept away from the Tokyo Olympics due to doping suspicions based on evidence from a Moscow test lab that was closed in 2015.

WADA Director General Olivier Niggli said he had lobbied sports organizations to ensure that these athletes – “not many, but there were a handful” – were not selected.

The team of 335 Russian athletes accredited for Tokyo are competing without a national flag or national anthem as punishment for state tampering with the Moscow laboratory database. The team’s name is ROC, the acronym for Russian Olympic Committee, without the word “Russia”.

The identity ban for the Tokyo Olympics and the Beijing 2022 Winter Games was imposed by the Court of Arbitration for Sport last December.

WADA had a list of around 300 suspected athletes and testified at Olympic sports bodies for possible disciplinary cases.

Niggli says “we cross-checked what we had from this long list” to make sure the athletes weren’t selected for Tokyo.

Coach Stanislav Popov said in comments via the Russian Olympic Committee that Gomboeva collapsed shortly after completing the qualifying round on Friday.

Popov says “she couldn’t take it, a whole day in the heat” and adds that the humidity made the problem worse. Temperatures in Tokyo were above 30 degrees Celsius (86 degrees Fahrenheit.)

The heat of the summer months in Tokyo has already prompted organizers to move the marathons and walking events to the cooler city of Sapporo.

US men’s water polo captain Jesse Smith will skip the opening ceremony for the Tokyo Olympics on Friday after the US Olympic and Paralympic Committee limited the number of players on his team who can participate in the festivities.

The Olympic water polo rosters consist of 13 players, and 12 are designated as available for each match. Smith said the USOPC told the team they could have 12 accredited athletes participate in the ceremony.

“We’ve tried to keep our team together and change it up with every constructive outing, but to no avail, and now it’s time to refocus on preparing for the game,” Smith wrote on Twitter. “So tonight I’m sending my team over to represent (the United States) proudly and enjoy every moment. Let’s go boys!

Smith, 38, is competing in his fifth Olympics, equaling Tony Azevedo for most Olympic teams for an American water polo athlete. He was slated to serve as the American Flag Bearer for the Opening Ceremony before that honor went to baseball player Eddy Alvarez.

A map on the Olympic website was changed after Ukraine protested the inclusion of a border across the Crimean Peninsula.

The card is part of a “Cheer Zone” feature that tracks how fans around the world have supported different teams at the Tokyo Games.

Late Thursday, the map had a black line at the top of Crimea in the same style as the national borders. Friday morning there was no line across the peninsula. Russia annexed Crimea to Ukraine in 2014. Ukraine still considers it to be Ukrainian territory.

The Ukrainian Embassy in Japan told The Associated Press in an email that “we have protested to the IOC and the map has been corrected.”

Road cyclist Michal Schlegel is the fourth Czech athlete from three different sports to test positive ahead of his competition at the Tokyo Games.

Schlegel tested positive at the team’s training base in Izu and will miss Saturday’s road race.

The Czech Olympic Committee said in a statement on Friday that Schlegel is in isolation and that Michael Kukrle and Zdenek Stybar will be his only two runners to line up at Musashinonomori Park for one of the first medal winning events of the Summer Games.

Czech beach volleyball players Marketa Slukova and Ondrej Perusic and table tennis player Pavel Sirucek also tested positive earlier this week. This prompted the Czech Olympic team to investigate whether the outbreak is linked to its chartered flight to Tokyo.