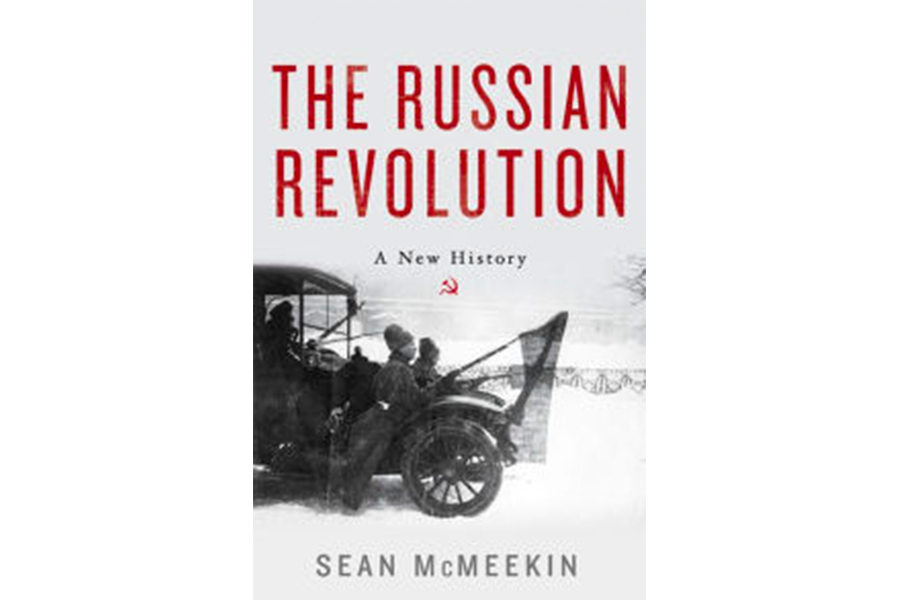 “The Russian Revolution” is a superb account of this founding event

The Russian Revolution of 1917 was one of the defining events of the 20th century. Yet, when compared to some of the equally important developments of the century, such as the outbreaks of the First and Second World Wars, the birth of the nuclear age in 1945 and even the collapse of the Soviet Union in 1991, the sweeping changes that have reshaped Russia are little understood in the West.

But in recent years a new generation of scholars has begun to mine the once-sealed archives of the Communist Party and this, coupled with the 100th anniversary of these revolutionary events, has led to a renewed focus on the origins and impact of the Russian revolution.

In The Russian Revolution: A New HistorySean McMeekin, a professor at Bard College, has written a superb and revealing account of this important chapter in 20th century history that will be essential reading for those wishing to learn more about this seminal event and the aftershocks that followed.

The story begins in 1905, when Russia was completely defeated in the Russo-Japanese War. In the midst of this conflict, a demonstration in Saint Petersburg turned violent and the “Bloody Sunday” massacre briefly radicalized the population. Later that year, a mutiny in the armed forces and a general strike forced Tsar Nicholas II to make concessions which included, for the first time, the creation of a parliament with very limited powers known as the ” Duma”. Aided by the imposition of martial law, the unrest dissipated.

Somewhat surprisingly, after this near-death experience, the regime enjoyed a resurgence in national prestige and the economy boomed. In the first decade of the new century, Russia’s economy was “growing at almost 10% a year, turning heads as dramatically as a booming China in the 21st century.” This, coupled with modest land reform, seemed to herald a new day. But domestic political stability depended on the maintenance of peace. And, unfortunately for the Tsar, when World War I broke out, Russia eagerly mobilized against Germany and Austria-Hungary. Empire.

Contrary to popular belief, the fighting was going reasonably well for the Russians. But on the home front, particularly in Petrograd (as St. Petersburg had been renamed to make it “less German” during the war), food and fuel shortages coupled with liberal-led political unrest led to revolution. of February which, after “a bewildering series of events”, quickly overthrew the Tsar. He abdicated in favor of his brother Grand Duke Michel, who then immediately abdicated to the “provisional government”.

When the politicians finally smoothed things over, 36-year-old Alexander Kerensky found himself in charge. He soon faced a new challenge: because the United States had recently entered the war, Germany wanted to pull Russia out of the war to move more troops to the Western Front. To do this, the Germans allowed Vladimir Lenin and a handful of aides to travel from neutral Switzerland through Germany and Russia. Not only did they deliver him to Petrograd, but they gave him enough money to wreak havoc once he got there in April. Lenin was the German choice because he was, in the words of one German diplomat, “much more berserk” than the rest of the Russian socialists.

He wreaked havoc. Unlike Kerensky, who wanted to keep fighting, Lenin called for “revolutionary defeatism”—that is, turning Russian military units against the war—in hopes of forging a peace settlement. Over the next six months, Lenin’s approach gained adherents, and Kerensky’s government proved scandalously inept. Eventually the Bolsheviks took control of Petrograd and Moscow and took over the government.

But the Communists did not control the country, even after signing the draconian Treaty of Brest-Litovsk with the Germans. In July 1918, “Russia was no more than a shadow of itself”. Czechs, Slovaks, Turks, and various Cossack groups controlled large parts of the country, and one million German troops occupied former Russian Poland, the Baltic, White Russia, and Ukraine. And the economy was in shambles.

But Lenin was lucky. As the German armies crumbled on the Western Front, Lenin re-established the Russian army and, under the direction of Minister of War Leon Trotsky, began the long and complicated task of expelling the foreign armies. After the withdrawal of foreign powers at the end of 1920, Lenin set out to subjugate his countrymen – mostly peasants – who had not accepted the Bolsheviks. The Red Army troops beat and starved the proletariat into submission. Huge challenges remained, including starvation and bankruptcy, but the revolutionary changes were in place. Lenin and the Soviets would rule Russia for the next 70 years.

“The Russian Revolution” is a carefully researched and well-written assessment of the complex and confusing events that have done so much to shape the past century. McMeekin is a reliable guide to a complex story, and the book moves seamlessly and clearly through a vast landscape of people and events.

Several themes dominate the book. First, McMeekin clarifies that there was nothing inevitable about the outcome. Before, during and after 1917, all parties – the Tsar, Kerensky and Lenin – made serious mistakes and the result could easily have been different.

Second, the indiscriminate and continuous use of terror that we associate with the Soviet Union was evident from the start. Indeed, Lenin and the Bolsheviks were so ruthless that even the German army was caught off guard.

Get stories that
empower and uplift Daily.

Finally, McMeekin clarifies that a small number of key figures played a pivotal role, and what those people did (or didn’t do) shaped the outcome. Nicholas II was unhappy and hopelessly out of touch. Kerensky was simply upset. Lenin had both the vision of turning soldiers against the war and German money to fund the project. But he was remote – and often out of the country during crucial events – and lacked the personal courage of Leon Trotsky.

Historians often wonder if individuals make history or if history makes individuals. In the case of the Russian Revolution and the emergence of the Soviet Union, it is clear that what individuals did, or did not do, at crucial moments decisively shaped the outcome.