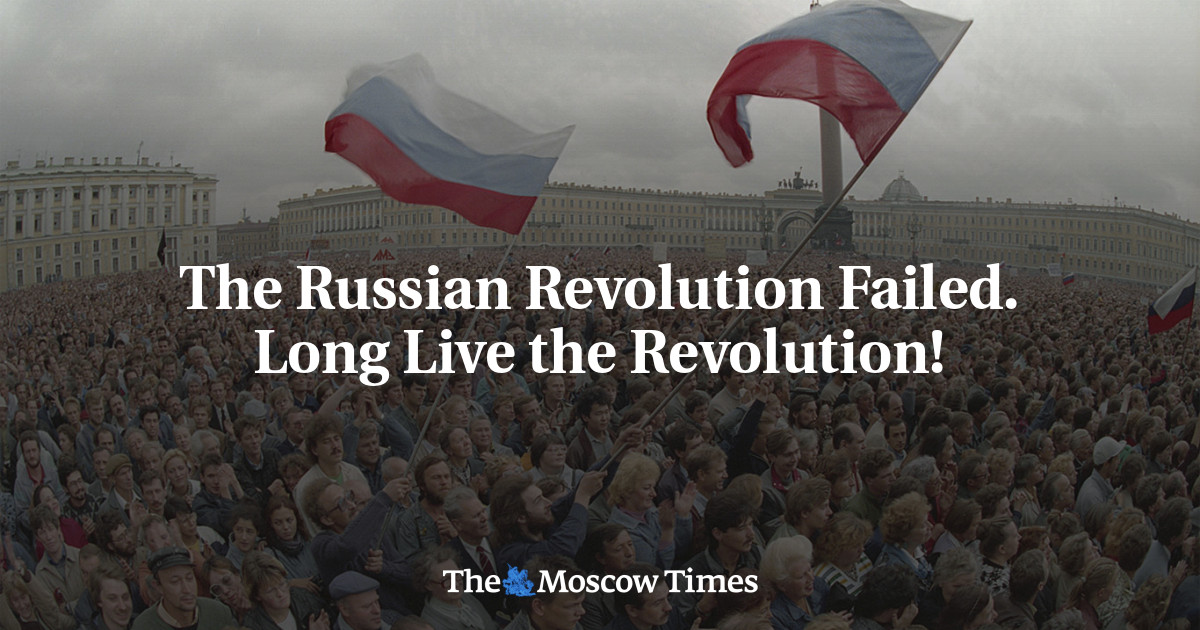 In 2022, the anniversary of the victory of the “August 1991 Revolution” in Russia brings only bitter disappointment, which escalates into depression. In 31 years, the country has taken the unimaginable trajectory from young democracy to full-fledged fascism.

All the mechanisms of representative government have been destroyed. Election results are written by a computer according to a predefined algorithm. The independent judiciary has been destroyed. The independent press was destroyed. Opposition members are arrested and poisoned with chemical weapons. A reign of terror operates throughout the country. People are judged for slogans like “Peace!” or “No to war”. They are arrested in the street for wearing blue and yellow sneakers (the national colors of Ukraine) or for putting quotation marks in the “wrong” place in a social media post. Neither the Gestapo nor the Stalinist executioners of the NKVD – as repressive as one might imagine – could have dreamed up such a thing. You can’t even call it Orwellian. Orwell never wrote anything as horrible as this.

The story of the sickness and death of Russian democracy is well known. The disease began long before KGB Colonel Vladimir Putin became president in 2000, in fact even before the Russian Federation entered the scene. On December 1, 1991, the Council of People’s Deputies of the Russian Soviet Federative Socialist Republic adopted a two-year moratorium on elections. In this way, the parliament of one state (part of the Soviet Union) became the parliament of an entirely different country (the Russian Federation).

Towards the end of the moratorium, the parliament did not want to relinquish its powers and in October 1993 it deposed President Yeltsin. Boris Yeltsin, a former Communist Party functionary, understood politics only as “a question of power” (Lenin) and sent tanks to fire on Parliament.

At the same time, centrifugal forces threatened to separate the state. The Republic of Chechnya broke away from the federal center and established its own armed forces. The oil-rich republic of Tatarstan has imposed a “sovereignty treaty” on Moscow. In April 1993, the people of the huge, largely ethnically Russian Sverdlovsk region voted to establish the “Republic of the Urals”, adopted a “charter” (constitution) and even issued their own currency, the “Ural Franks”. A little later, four other neighboring regions expressed their desire to join the “Republic of the Urals”.

At this point, Yeltsin probably realized that the country was on the verge of collapse. It was not part of his plans or his political ideology. After firing on the parliament, he called Eduard Rossel, leader of the “Ural Republic” – Yeltsin knew him well because he had been leader of the Communist Party in Sverdlovsk Oblast before moving to Moscow – and called promised that the next day he would send tanks into the fire. on him too.

Rossel understood the threat and complied. Chechnya’s president, former Soviet general Dzhokhar Dudayev, did not understand the threat. Or perhaps, unlike Rossel, who had only poorly armed policemen, Dudayev had thousands of well-armed and well-trained men under his command. The Russian army realized this very quickly when it tried to take the Chechen capital of Grozny in December 1994.

The bloody Chechnya war of 1994-95 was the burial of Russian democracy, because no democracy can exist if it demolishes entire cities, as the Russian army is doing today in Ukraine.

After that, Yeltsin no longer had popular support, and he was forced to seek it out from the so-called “siloviki” – the army and what was left of the Soviet KGB. When the USSR collapsed, the KGB was not just a secret police force. It was a powerful political force. From 1967, KGB chief Yuri Andropov had regularly sent his men and women to infiltrate all government agencies, where they worked as agents of influence within their own state. As a result, in 1991, all ministries, large corporations and monopolies were infiltrated by KGB employees who had only one loyalty: to their agency.

In state organizations, KGB agents set policy; in the private sector, they embezzled money. The press frequently reported on the so-called 18% tax – a tax that all businesses in the 1990s had to pay to secret KGB accounts. The KGB has become something like the Sicilian Mafia – but on the scale of 1/7th the land mass of the earth. Those who refused to pay paid with their lives. A series of murders and mysterious deaths began in the mid-1990s. The first that turned out to be a murder by a chemical warfare agent and not an accident was the death of banker Ivan Kivelidi, who financed political parties. Democratic Politics (1995).

The genie had come out of the bottle. Yeltsin’s announcement on December 31, 1999 that he was choosing Vladimir Putin as his successor was the final nail in the coffin of democracy. It marked a change in the system of governance. Republics have no “successors”. If there is a “successor”, it is a monarchy.

Does this mean that the “Overton window” – the range of acceptable policies – has definitely closed on Russia? Of course not. Even under constant oppression, a powerful and freedom-loving culture has emerged in Russia, with a strong intelligentsia and a middle class that does not want to live by the rules of the USSR or Putin’s regime. In just the first two weeks of mass anti-war protests in Russia, tens of thousands marched and around 17,000 people were arrested.

The cycles of Russian history go from the accession of a sovereign to the throne until his death. Putin is sick, he looks terrible, and he won’t live forever. With the exception of the 1980s in the Soviet Union, when gerontocrats were dragged half-dead to the throne, in virtually all other historical cases the death of the ruler signifies a change of political course. The new course was a cycle of liberalization followed by political changes and reforms.

As the famous Russian literary scholar Dmitry Likhachev said, “In Russia you have to live long”. Likhachev knew what he was talking about, he was a prisoner in Stalin’s camps in the 1920s, but he saw democracy in Russia in the 1990s. So if a revolution fails, you just have to try to live longer to see it succeed again.

Opinions expressed in opinion pieces do not necessarily reflect the position of The Moscow Times.