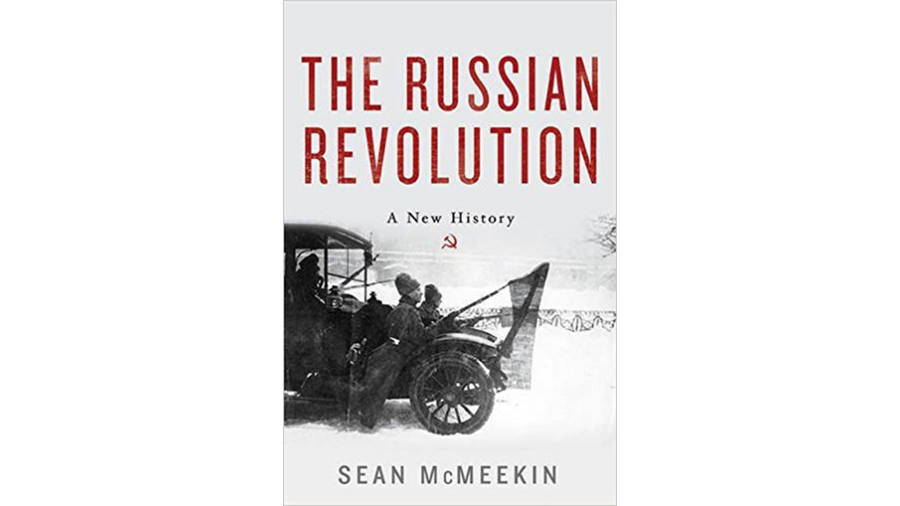 The Russian Revolution by Sean McMeekin — out of the blue

Like a beautiful month of August brings a bag of plums, the centenary of the Russian Revolution has produced a bumper crop of books. A similar harvest accompanied the anniversary of the First World War; each looming deadline has seen an army of historians crunch through forests of notes. But mere dates make bad inspiration. Far better reasons for writing come from the changing times themselves. In the Russian case, rich treasuries of declassified archives have transformed the color and shape of what we know about the revolution and its aftermath. More fundamentally, the very fall of communism changed everyone’s perspective on their birth. Forget the centenary; what’s behind the best new writing is the disappearance of the Berlin Wall.

Sean McMeekin’s ‘New History’ traces the history of the 1917 Russian Revolutions from Nicholas II’s accession to the Treaty of Rapallo in 1922. In professional style, as if about to go through a century of pirouettes, the introduction promises to keep us spellbound. solid basis of facts”. Instead of coaxing specious ideological points from Russia‘s epic tragedy, in other words, McMeekin wants to “rediscover the revolution as it unfolded in real time, from the perspective of key players who didn’t know, as they acted, how the story would turn out”. out”.

It sounds like lawyer language: so cool and measured, sensible. But we are dealing with delicate things. The specter haunting “terra firma” is that of Leopold von Ranke, the 19th-century German apostle of history “as it actually happened,” a stodgy Teutonic fact. McMeekin is not Ranke – his book bears very un-Teutonic marks of haste – nor is he impartial. Its real aim is to undermine Marxists, that is, almost every social historian of Russia who has written since the 1970s. Its hero is that Cold War stalwart, Richard Pipes.

The pace is fast; the book is half the length of Pipes’ 1990 work. To get things going, McMeekin selects. As a researcher, his interests tend towards the diplomatic and the political. In the past, at the same breathtaking speed, he wrote about the Ottoman Empire, Soviet banking, and Russian foreign policy. His main theme in the current book is Russia’s fatal course of action in World War I. He is good at diplomacy Dance of Death which involved the tsarist empire in the military policy of the Balkans then of central Europe, amusing on the legal scandals, predictable on the murder of Rasputin, who had warned the tsar against any armed adventure in Europe. But it’s when he reaches the breakthrough year itself that the bunnies begin to appear from his academic hat.

There were two revolutions in 1917, and McMeekin believes the first was largely an accident. The war had strained every warring regime – Russia more than most – but he identifies signs of resilience. Other writers have insisted that the Russian capital lacked bread, so he finds witnesses with sacks full of bread. Where most historians have pointed to a crisis in the Russian military, he describes a thriving, even vibrant military force better fed and more cheerful than any peasant at home. Even the tense and weary citizens of Petrograd come across as confused, enduring, and largely apolitical human beings. What changed that, tipping Russia into a needless, tragic and unexpected revolution, was a pause in time. For McMeekin, it was only the coincidence of a warmer, brighter morning on International Women’s Day, March 8, 1917, that brought the crowds out, turning ordinary protests “into a street party. rolling”. This mood turned sour, shots were fired, and within a week the Tsar was gone.

There are many colorful details in McMeekin’s account, including a confident insight into Russian conservatism and a shrewd assessment of military calculations. But the idea that the revolution was an accident defies belief. On the one hand, the extent of popular misery on the eve of this historic “weather pause” is beyond doubt. It is possible, of course, to find authentic memories of champagne and dancing. There are numerous diplomatic reports, British and French, which dismiss any hint of brewing problems. But there is also a wealth of evidence on the other side, including price inflation so rapid that even British diplomats were affected, not to mention strikes and mass shootings, grim and hungry crowds.

Lenin had his own view of the historical accident. The revolution, he always said, is not a plum but a turnip. It doesn’t fall into your lap when the sun comes up; you have to pull it out of the ground. He could have added that you must also have the army on your side. It was only the massive disaffection of the garrison and much of this supposedly dynamic soldiery that made the two revolutions possible.

Change often seems to depend on mere coincidence. But there are always deeper pressures, social tensions of the kind that McMeekin chooses to minimize. They were there in France before 1789 and they engulfed Russia between 1905 and 1917. In writing his rapid revisionist antics, McMeekin listened mainly to the losers in the Russian affair, and like the displaced everywhere, they did not see the tidal wave until much too late.

Catherine Merridale is the author of “Lenin on the Train” (Penguin)