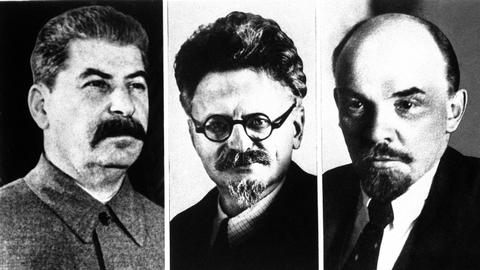 The Bolsheviks had a battery of powerful leaders, but the most notable were Vladimir Ilyich Ulyanov – Lenin as he is better known – Joseph Stalin, and for a time Leon Trotsky.

One hundred years ago, the Bolsheviks and their followers came to power in Russia in what would become a turning point in history.

The absolutist Tsar of Russia had already ceded some power to a parliament in 1905. In February 1917, this system collapsed. The last Tsar, Nicholas II, abdicated, ending the imperial era in Russia and ushering in a period of uncertainty and a provisional government.

Then, in November 1917, the Bolsheviks opposed the Provisional Government and established “majority” rule.

But who were they?

“Bolshevik” means “majority” in Russian. The Bolsheviks were originally a faction of the Russian Social Democratic Labor Party which split from the Mensheviks (“minority”) in 1903 to form their own party.

Among the Bolsheviks were a number of future leaders of the Soviet Union: Vladimir Ilyich Ulyanov (Lenin), Joseph Stalin and, for a time, Leon Trotsky.

There were two phases in the Russian Revolution, which developed in a cauldron of disillusion with the Tsar, serfdom and World War I.

In the first phase, Tsar Nicholas II was ousted in the February Revolution, which ended the mixed imperial parliamentary regime in Russia. A provisional government briefly took power. The second phase, beginning on November 7, 1917, brought the Bolsheviks to power.

The Bolsheviks institutionalized their power as part of the Communist Party of the Soviet Union. The CPSU governed the Union of Soviet Socialist Republics (USSR) until its dissolution in 1991.

The dissolution of the USSR on December 26, 1991 followed decades of slow economic disintegration as the planned Soviet economy lost ground to market economies.

Mikhail Gorbachev’s policies of “openness” and “reconstruction” could not stop the slide.

The human and economic cost of the failed Soviet intervention in Afghanistan is also seen as a key factor contributing to the eventual collapse of the USSR and the emergence of fifteen independent states.