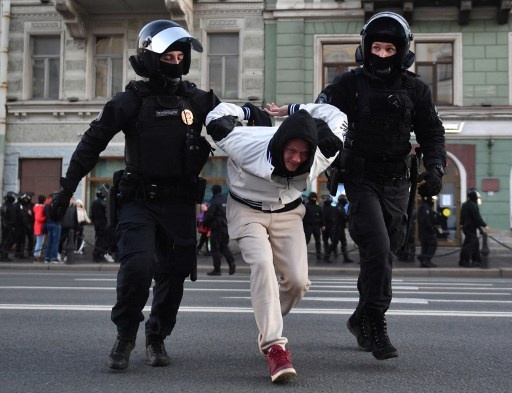 The new Russian revolution is at hand – Kyiv Post

Putin shook his sword, made threats and called for mobilization. Just last week, the news and social media were full of stories and images of torture, murders and mass graves.

Faced with the mobilization, there are demonstrations in the streets of certain cities in Russia while many other men try to flee the country.

And while all this is happening in Russia, there are also protests in the streets of Iran.

At first glance, it seems that the Iranians are much braver than the Russians. It has been noted, for example, that Iranian protesters aggressively protect each other in their struggles against government law enforcement, while many Russian protesters stay behind to protect themselves.

Of course, there’s nothing brave about men who flee the country instead of taking to the streets.

But even with all that has been said, I think the comparison between the current situation in Russia and Iran is wrong. In fact, I think it’s best to compare the Iranian situation to the Ukrainian situation, and consider the Russian situation as a completely different beast.

For the Russian protesters, it’s a whole different set of circumstances. Even though they are clearly oppressed, their protests today are not against oppression. They are against mobilization. They fight against a specific circumstance; they are not fighting for freedom and against tyranny, as Ukrainians and Iranians do.

Even if you think back to the protests in Russia immediately after the invasion, you realize that those protesters weren’t fighting for freedom from tyranny either. On the contrary, they were fighting against the specific circumstances of the invasion. This is why these protests often do not last and do not bring significant change.

It’s no secret that I am a Russian who has dedicated himself to ending Putin and Putinism and bringing democracy to my Russian homeland. But I know that democracy will never be possible in Russia unless the Russian people are willing to risk their lives and fight like we see Ukrainians fighting.

Ironically, the Russians have to fight relentlessly against the same enemy that the Ukrainians are fighting.

But what will it take for my Russian compatriots to fight their government for freedom the way Ukrainians are fighting for theirs?

The obvious but unnecessary answer is: the future.

It’s a redundant answer because while it sounds and feels good, it’s been the same answer forever in Russia, and it’s never resulted in a change.

But today, some very important things have changed in Russia:

1. Thousands and thousands of soldiers went to Ukraine. They were told they were liberators, but found out they were invaders.

2. These soldiers expected to be greeted with flowers. But instead, they were met with automatic gunfire and deadly fire from Javelins and Stingers.

Lesson: My government doesn’t care about me or protect me, it protects itself.

3. These soldiers were told that Ukrainians live like animals. Then they saw with their own eyes how much better life is in Ukraine than in Russia.

Lesson: I have been deceived. Everything I have been told about my country and my way of life is wrong.

4. These soldiers see beautiful cities, parks and houses in Ukraine; their own towns, parks and homes are embarrassingly poor by comparison.

Lesson: My government must keep all the wealth for itself.

5. These soldiers will eventually return to Russia (a country with strict gun control laws, for obvious autocratic reasons) with both weapons and training, and they will be armed with the knowledge that life in Russia is neither better nor fairer, as has been fraudulently hammered in the head by Putin-controlled media.

If you are that Russian soldier, you can now envision the possibility of the kind of future that you and I live for in the West, instead of the bleak future that Putinism promises. You and I know our future is worth fighting for. Now these Russian soldiers also know what that future might look like. And they will bring this new vision of the future back to their homes, families and friends. They will share with others what they have seen in Ukraine and this vision for the future. They will infect others with this vision of the future. And they will have weapons, training and combat experience; only now can they fight for themselves, for their families, for their friends. For their freedom.

After all, a future in which Russia remains an enemy of the West, an existential threat to much of the rest of the world, is a terrible future for everyone. For Ukrainians and other Eastern European countries, as well as for Russians who stay at home. Russia, as a democratic nation and trusted partner sharing common values, benefits both Russians and much of the rest of the world.

The beginning of a revolution in Russia is already happening. Every day in the news, you can see proof of this if you know what to look for. it’s just a matter of understanding how all the pieces of the puzzle fit together.

This is the new Russian revolution with two very clear objectives:

I and many other Russians have been preparing for this moment for many years. And now the time has come.

Ilya Ponomarev is a leader of the Russian democratic opposition. A former member of the Russian Duma, he was the only deputy to vote against the annexation of Crimea in 2014, which then forced him into exile.