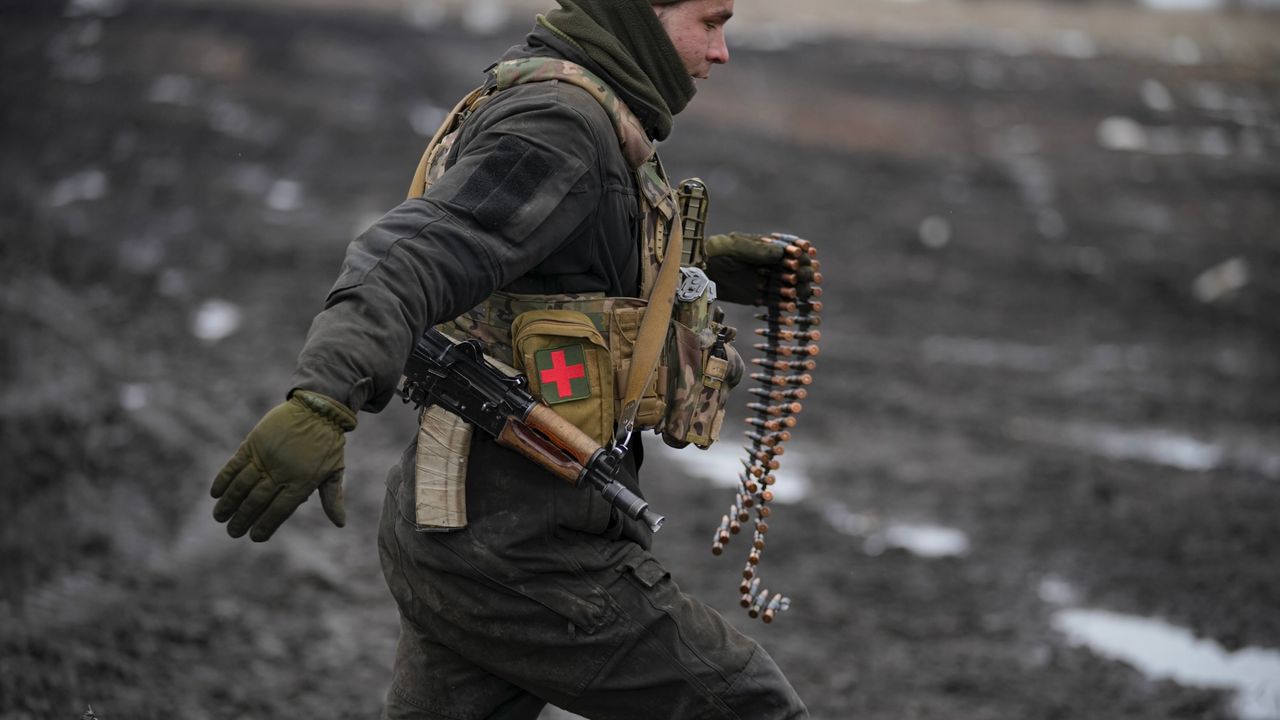 The Russian invasion of Ukraine and the aggressive strategy of the NATO powers threaten the world with a catastrophic world war. The French press discusses the effects of the nuclear bombing of Paris while spreading wall-to-wall anti-Russian propaganda. This crisis directly raises the question of the role and character of the petty-bourgeois parties that the French media describe as “extreme left”, such as the New Anti-Capitalist Party (NPA) and Lutte Ouvrière (LO).

The opposition of the working masses to NATO’s military involvement in this war is overwhelming. Last week, 69% of Americans oppose US intervention according to a Rasmussen poll, and 70% of French people oppose French intervention according to a CNews poll. The NPA and LO, however, seek to channel this opposition behind the pro-capitalist trade unions, which support NATO warmongering, and thus block a struggle against the danger of a world war.

The NPA, which has backed NATO’s intervention in Libya and Syria against pro-Russian regimes, calls for widening the conflict. He advocates “the delivery of defensive weapons without any conditions” by NATO, while demonizing Russia and Putin. Russia is, for the NPA, the most aggressive country in the world that must be stopped at all costs, according to analyzes it has published by Professor Gilbert Achcar, who is also a paid adviser to the British army. Indeed, Achcar insists:

The fate of the Russian invasion of Ukraine will determine the aggressiveness of all other countries. If it fails, the effect on all world and regional powers will be a strong deterrent. If he succeeds, that is to say if Russia manages to “pacify” Ukraine under his boots, the effect will be that of a major shift in the world situation towards the law of the jungle.

While on the surface LO appears to play a different role, it is geared towards different layers of the same union bureaucracy and capitalist state machine to which the NPA is attached. Like the NPA, LO managed to obtain millions of votes for its candidates in the elections thanks to the media coverage of the early 2000s. But it limits itself to certain criticisms of French foreign policy, without mobilizing its voters against the war, while collaborating with openly pro-war parties like the NPA.

On France 5, LO’s presidential candidate, Nathalie Arthaud, complained that the NATO powers were strengthening their positions around Russia and risked provoking a war.

She declared that “a war of influence has been going on for years” in the region, and accused NATO of being the main culprit: “We must condemn the maneuvers carried out by the Western imperialist powers, by the NATO and of course the United States, because today we are told, of course, that Putin is the aggressor. The reality is that a war of influence lasted for years. It is this military pressure in the region since 2014 that is now degenerating into armed conflict.

Arthaud pointed to “the encirclement of Russia by NATO, which exerted military pressure on Russia and ultimately led to this armed confrontation. Of course, I condemn these rivalries, this balance of power.

She added: “This balance of power, this balance of power has existed for many years and I have the impression that we are witnessing a kind of crude manipulation which resembles what happened in Iraq in 2003. We were told that Saddam Hussein was a monster and that he wanted to blow up the planet. Moreover, the Americans invented weapons of mass destruction in Iraq to start the war and invade it.

On the war started by Moscow, Arthaud said: “I have no sympathy for Putin’s regime. Of course I think we have to stop this war, the first victim is the population. But we must put our house in order, facing the responsibility of the Western powers, of France aligned in reality with the United States.

As for NATO’s aggressive role in the region over the past decades, and Putin’s reactionary role, Arthaud’s words are pretty accurate. She was also able to thwart certain traps set for her by the France 5 interviewer, who urged her to adopt the NPA’s pro-NATO warmongering position on the war.

To his interlocutor objecting, “but it is not NATO that is waging war”, Arthaud replies: “Yes, NATO is waging war. … Do you know how many weapons the Americans sent to Poland, Romania, Ukraine as well? There have never been so many military bases around Russia.

In fact, Washington and its European allies interpreted the dissolution of the Soviet Union in 1991 as an opportunity to try to impose their unchallenged domination on the planet. Since then, imperialist interventions have devastated Afghanistan, Iraq, Libya and Syria. NATO is currently conducting a major rearmament program targeting Russia. After surrounding Russia with military bases and refusing Moscow’s calls for security guarantees, NATO tried, and succeeded, to provoke a Russian invasion of Ukraine.

But LO is not concerned with mobilizing the workers against the danger of war which arises from the policies of all the great powers, and especially from the imperialist powers. Like the rest of the petty-bourgeois pseudo-left milieu that emerged from the middle-class student movement of 1968, LO instead aimed to block an international anti-war movement in the working class.

Although it obtained millions of votes in the elections and has several thousand members, this party does not call for mobilization against the war.

In fact, LO is simply trying to strengthen the trade union apparatus in each country. This policy was clearly expressed at a meeting last month by Jean-Pierre Mercier, the main trade union representative of the Stalinist General Confederation of Labor (CGT) of the automobile firm Stellantis (PSA) and spokesperson for Nathalie Arthaud during the the 2022 presidential campaign.

While admitting that the “trade unions have acted as a transmission belt in the working class” for the ruling class, Mercier asserts that the first duty of a revolutionary is to participate in the trade union bureaucracy: “They must be its elements the most active, the most determined, the most militant! Revolutionary communists must be where the workers are, fight alongside them and seek to organize those who are not unionized: this is the fundamental starting point of the work of a communist militant.

First of all, this argument is false, because workers are no longer unionized in France and in increasingly large regions of the world. The percentage of unionized workers in France is around 7%. Masses of workers distrust union bureaucracy, as seen in the “yellow vest” movement that organized independently of unions on social media.

Moreover, and above all, LO’s strategy of channeling workers behind national union bureaucracies divides the working class and prevents a common struggle against war. It only took a few days for LO’s hypocritical criticism of NATO to be exposed. Indeed, the unions promoted by LO are joining the imperialist powers in supporting NATO’s military intervention campaign against Russia.

On March 9, the CGT union, of which Mercier is a senior official, issued a statement denouncing Russia as an aggressor and demanding that the NATO powers punish it severely. He claims that only Russia’s defeat by NATO and the fall of the Putin regime will be enough to restore peace and prevent a world war.

“The return to peace requires the fall of Putin”, writes the CGT, adding: “A lasting peace can only be achieved by his departure and this will only occur through the convergence of three factors: strong international sanctions and truly effective , a hopefully victorious Ukrainian resistance; and support for the democratic and progressive Russian opposition.

The CGT rejoices that severe economic sanctions can destroy the standard of living of masses of workers in Russia, but also internationally because of the devastating sanctions imposed on Russian oil and grain exports. The CGT also whitewashes the role of far-right Ukrainian forces which the CGT hopes will be victorious with NATO support against Moscow. These statements confirm that the CGT bureaucracy, like LO, represents the interests of wealthy layers of the middle classes who consciously support imperialism.

Against LO’s passivity, the Socialist Equality Party (PSE), the French section of the International Committee of the Fourth International (ICFI), calls for building an anti-war movement in the working class, independent of the trade union bureaucracy and of its defenders in the pseudo-left parties.

This perspective of building an international anti-war movement in the working class separates the PES and the ICFI, the world Trotskyist movement, from the bourgeois tendencies represented by the NPA and LO. To combat the growing danger of a Third World War, the urgency is to build the International Alliance of Workers of the Base Committees in opposition to the trade union bureaucracies, and the PES in opposition to LO.

Review of the WSWS

What is the pseudo-left?

This review examines the response of pseudo-left political tendencies internationally to major global political events of the past decade.