The Bolsheviks were not ordinary people

The “specter of communism” haunts the world, frightening the ruling classes, businessmen, corporations, capitalists, liberals, conservatives, believers, atheists and leftist petty bourgeois, who – for a hundred years – did their best to make people ignore the Bolshevik Revolution of 1917, because ignorance is one of the greatest weapons in the hands of capitalism. However, they could not remove the year 2017 from the calendar. With no other option at hand, they turned their weapons laden with allegations, slander, slang, abuse and taunts against the Bolsheviks, the October Revolution and Vladimir Lenin. blame them for ruining Russia.

Now it is a fashion, a national responsibility and a moral duty of the bourgeoisie not to miss a single opportunity to throw stones at the Bolsheviks.

This extreme stream of criticism proves that Bolshevik ideology is alive as a threat to capitalism, despite a span of more than two decades since the disintegration of the USSR.

Those who make the most common and fashionable allegations that the Bolshevik revolution is premature in a backward country, blaming Lenin for deaths and famines and circumventing evolutionary processes, always become furious under cross-examination at the light of many questions, including the following questions.

1) What was the alternative to the Bolshevik revolution in the early 20th century when Russians and Europeans were suffering from the destruction wrought by World War I, especially the miseries of hunger, death and collapsing infrastructure ?

2) Why did the Provisional Government continue the war and whose war was it?

3) Why is the aggression of foreign countries ignored when talking about 1917?

4) Should Bolshevik ideology or its historical revolution be condemned only because power later fell into the hands of so-called autocrats?

The report of the Congress of the Communist Party of South Africa, published just before Nelson Mandela came to power, accused the Bolsheviks of being adventurous. The Russian left other than the Bolsheviks has always criticized the “premature revolution”. Lenin was called a cult leader by Waldemar Gurian in his book Bolshevism, published by the University of Our Indiana Press 1952 and 1963.

Why is Lenin’s masterpiece blacked out in 2017?

The pages of Russian history from 1855 to 1917 reveal a trend of resistance against tyranny since the abolition of serfdom (slavery of peasants) by Alexander II through the emancipation reforms. The ruling elite had to bring about the reforms because they were well aware that “it is better to liberate the peasants from above than to wait until they have won their freedom by uprisings from below”.

But in 1917 the situation was different. The whole system, including the Russian state and the bourgeois government, was unable to formulate and implement any program to solve the problems of growing differences and destruction.

Practically, the Russian state had collapsed before the February Revolution. The millions of helpless army soldiers, recruited by force, fighting on the front lines without basic needs, had only two options: either face death or loot the villages and towns of the country.

Russia was rapidly heading towards anarchy while the Russian bourgeoisies were not interested in the Russian people, whatever their class, as the American journalist John Reed had elaborated. As Russian businessmen and factory owners hoped that the Germans would advance to crush the working masses led by the Bolsheviks, tragedies knocked at the doors of all classes except those who were benefiting of the war.

In such a situation, there was no choice but to forcefully intervene in the affairs of the state by overthrowing the incapable government and replacing the state apparatus with workers, peasants and soldiers who already controlled the streets, factories and villages. The same task could be accomplished by the Bolsheviks alone who were the only force to issue slogans to convert the imperialist war into a civil war on the basis of class conflict.

Renowned leftists and intellectuals opposed the Bolsheviks, including the great Russian Marxist philosopher Georgi Plekhanov, whose study of writings Lenin called compulsory for any communist. Likewise, Germany-based Rosa Luxemburg, called Eagle of the Revolution by Lenin, was unable to achieve certain things at the time of the revolution and opposed Bolshevik strikes. The seizure of power in October was not a coup but the completion of the revolt of the working masses of February 1917.

But today’s so-called communists and other leftist “sectarian believers” cannot use these figures to hide their bias against the Bolshevik revolution. Their prejudice is due to acts of cowardice they committed with the intention of becoming leaders.

These leftist intellectuals used to enchant working class people with their intellectualism like a priest or a magician. But when revolution begins to knock on society’s doors, they are wary of transferring power and leadership to the masses. So when the time comes to put their teachings into practice, these communists betray the working masses. Lenin rightly called them “helpless.”

According to historical materialism, there could be no evolutionary change without revolution. This is not just a dogmatic lesson from the books of Marx and Friedrich Engel – history has proven the same thing over and over again. 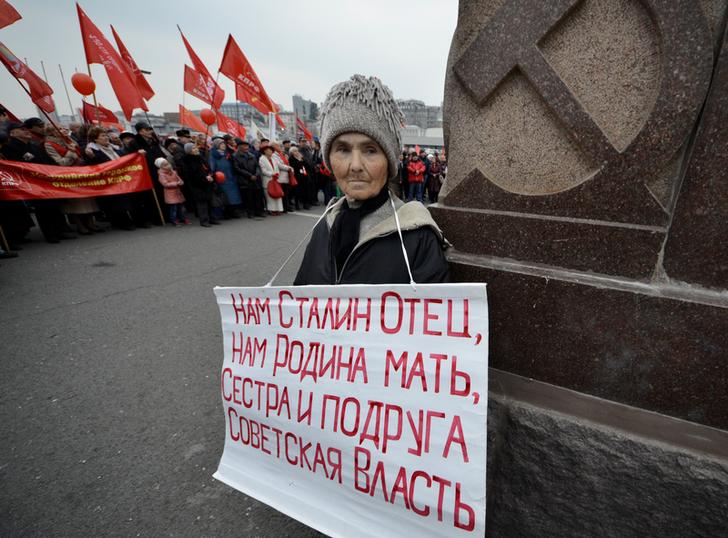 “Stalin is our father, the fatherland is our mother, the Soviet power is our sister and our friend. Photo: Reuters/November 2017

India is the greatest example of the evolutionary process where the caste system still forces the programmed castes to live like animals in the absence of a revolution to overthrow the system.

Western Asian countries have ancient civilizations and cultures where, for example, the liver of a dead enemy is eaten to settle scores. The civilization of the United States is based on 200 years of civil war, but religious extremism, racial hatred and national prejudice prevail. The majority of the subcontinent’s middle classes turn to religious illusions. The Russian government‘s support for the Orthodox Church in the age of genetics and cloning raises many questions. Renowned scientist Stephen Hawking’s recent warnings about artificial intelligence and the destruction of the world have clearly endorsed Engels’ definition of capitalism as a “system of anarchy.”

After the October Revolution, Vladimir Lenin stopped offering new party memberships in order to keep dishonest opportunists at bay. In his various writings and speeches, he denounced bureaucratic government and party systems. Lenin forced members of the old bureaucracy to work under the acute supervision and surveillance of the dictatorship of the proletariat.

It was the time when the Bolsheviks defended their revolution from the attacks and plots of internal counter-revolutionary forces, the bourgeoisie as well as foreign invasions from dozens of countries. They fought, sacrificed their precious lives and won not only for the Russian revolution but for the world revolutionary movements as a whole.

So how can we condemn them? If they are condemnable for the alleged consequences, then condemn Albert Einstein for the nuclear bombs that ruined Hiroshima and Nagasaki. Condemn George Stephen for world wars and environmental issues.

The Bolsheviks are condemned because they exposed capitalism in practice. Their government was the first and possibly the last in modern history to abolish secret diplomacy, releasing all secret and unannounced government documents and agreements. Who could have dared to do so when he was in power?

But it is a fact that centenarians do not trigger revolutions. Revolutions are not parties of the petty bourgeoisie to be carried out on specific dates. The fate of the world revolution of the proletariat depends on whether or not capitalism has escaped the crisis. In the presence of miserable lives all over the world, economic crises, wars, hunger, political instability and world division, only the ignorant and the stupid can claim that capitalism is crisis-free.

The Bolsheviks were not ordinary people. They were the ones who stormed the sky.

Read also – To Russia, with love: Side notes of the World Festival of Youth and Students