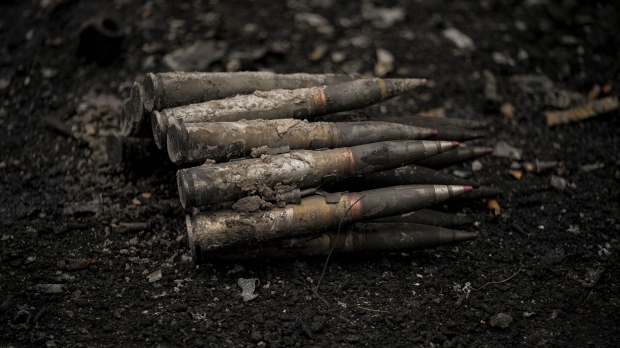 The sound of rockets launched in the distance breaks the silence of an otherwise calm morning in Kyiv.

“It’s us, we are attacking Russian positions near Hostomel,” says a Ukrainian soldier, while the shots are triggered in synchronized rhythm.

In this particular case, the rockets that the Ukrainian military uses to target invading troops from Moscow are actually Russian.

“Last night we sent to the Ukrainian armed forces 24 Uragan missiles that were on their way to fly over our cities,” said Yuri Golodov, deputy commander of one of the Ukrainian territorial forces and a retired sailor from the Ukrainian navy.

“We captured them intact, gave them to the Ukrainian Armed Forces at night and now the Ukrainian army has returned missiles to them,” Golodov said.

Golodov plays a key role in the repurposing of military equipment abandoned by the Russian army – or captured by it.

He leads a team working in a military junkyard at an undisclosed location in Kyiv, repairing and repainting Russian military equipment for use by Ukrainian forces.

“Everything we take from the Russian army, we transfer to the Ukrainian armed forces,” he says.

A SECOND LIFE FOR DAMAGED WEAPONS

The Ukrainian flag had been painted over Russian military symbols and Golodov’s unit was removing communications equipment before returning it to the front line.

“We will use it to transport the wounded,” he said, adding that it would make an “important” contribution to Ukraine’s war effort.

“It’s a very suitable all-terrain vehicle. It can cope with any swamp or snow.”

Much of the equipment used by the Russian military is similar or identical to that used by Ukrainian soldiers, so they are familiar with how it works.

“It goes back to the Soviet Union,” Golodov says. “It’s pretty reliable.”

“Everything is in working order. It looks like an old weapon, but in fact, if you use it correctly, it will serve us for a long time,” he adds.

Golodov says his battalion is also responsible for capturing some of the equipment in the yard.

“We are a deep reconnaissance special forces battalion working behind enemy lines,” he explains. “Our task is to destroy the supplies of the Russian army – ammunition, fuel, food.”

WEAPONS SEIZED FROM TROOPS UNDER FIRE

Around the corner, an old Russian army tank truck stands ready for redeployment and, under cover of camouflage cover, a captured armored personnel carrier awaits its next mission.

According to Golodov, the vehicle was captured by his unit when they attacked a Russian column.

“We fired on the first vehicle, and when it exploded, the column stopped,” he said. “(The Russian soldiers) fled and we took their military equipment.”

According to Golodov and his men, this is a common occurrence on the battlefield.

“The Russian soldiers are frightened, demoralized. They are afraid to separate, because they are being shot at from all the bushes,” he said.

He says some appear to be very young and inexperienced: “Most of them don’t know or understand why they are here.

Ukrainian Territorial Defense Forces are also green. Most had no kind of military training before the Russian invasion, but the men say they are ready for battle.

In another part of the facility, soldiers armed with AK-47s train for a possible encounter with Russian troops. They move in groups in an organized fashion and seem unfazed when their commander fires blanks in their direction.

Golodov watches, proud. Before retiring from the navy, he says he spent time with the Soviet Union’s Northern Fleet in Mursmansk, in northwest Russia, and says he knows what Russian forces are capable of.

He tells us he’s not surprised at how well Ukraine has fared in the face of seemingly insurmountable odds.

“The strength of the Russian army is nothing more than a myth,” he said, confident of a Ukrainian victory. “How can anyone think otherwise?”

Do you have Ukrainian and Russian family members? How are you handling the crisis? E-mail [email protected]

2022-03-21
Previous Post: The French Lutte Ouvrière demobilizes the workers’ opposition in the face of the danger of NATO-Russia war
Next Post: First Light Supporting the Second Harvest of the Russian Revolution