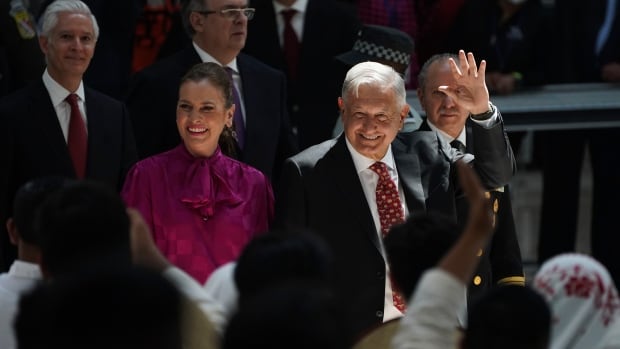 Prime Minister Justin Trudeau appears to have spent much of his Tuesday phone conversation with his Mexican counterpart discussing Ukraine.

According to Canada’s official reading, “The Prime Minister has invited the President to participate in the ‘Stand up for Ukraine’ campaign engagement event on April 9, which he is co-hosting with the Chair of the Commission. European Union, Ursula von der Leyen, to raise funds for Ukrainian refugees and internally displaced persons.”

It was unclear whether Mexican President Andrés Manuel López Obrador – usually known as AMLO – had accepted the invitation. He appeared to lack enthusiasm for supporting Ukraine and his MORENA party has seen a number of pro-Putin outbursts since the February 24 invasion.

On Tuesday – in what Mexican critics of López Obrador’s “Fourth Transformation” movement called a new low – the newspaper that is often seen as the ruling party’s unofficial mouthpiece shocked many Mexicans with its front page on the murder of civilians in Bucha and other newly liberated towns on the outskirts of Kyiv.

The captions repeated various Kremlin claims – including one alleging that Bucha’s corpses are live actors and that one of the victim’s hands can be seen moving in a video. (It is not possible.)

As much of the world reacted with outrage to Russia’s invasion of Ukraine, a group of lawmakers from Mexico’s ruling MORENA party and the allied Labor Party decided the time was right to create a new “friendship group” with Russia.

Russia’s Ambassador to Mexico, Viktor Koronelli, celebrated the occasion on March 23 by meeting with about two dozen pro-government lawmakers while opposition members demonstrated outside the chamber with signs saying “No to War “.

“For us it is a sign of support, friendship, solidarity,” Koronelli said, “in these complicated times for my country, facing not only a special military operation in Ukraine but also a tremendous media war “.

“Russia did not start this war. It ends it,” he told his Mexican hosts.

Speaking on behalf of the ruling party, Congressman Armando Contreras Castillo praised the Soviet Union, which he said gave Mexico “a new way of thinking about society and the economy, a new way of understanding the world and life”. Castillo said Mexico also wants to be closer to Vladimir Putin’s modern Russia.

“Our goal today is to strengthen Mexican-Russian relations,” he said. “We are ready to do everything to strengthen the friendship between Mexico and Russia and establish new ties.”

Two faces of the AMLO government

Mexico has a highly professional diplomatic corps and currently holds a seat on the UN Security Council. There, Mexico “has never ceased to condemn the acts of aggression perpetrated by the Russian Federation in Ukraine, while recognizing its sovereignty, political independence and territorial integrity”, said Oscar Mora of the embassy from Mexico to Ottawa.

And in the General Assembly, Mexico co-sponsored with France a motion accusing Russia of being responsible for the humanitarian catastrophe in Ukraine.

“Mexico also expressed its support for UN Secretary-General Antonio Guterres’ call for an independent investigation into the atrocities in Bucha, identifying those responsible for seeking justice,” Mora told CBC. News.

“Rest assured that the condemnation of Mexico will remain clear and strong, especially as a non-permanent member of the Security Council, and we will continue to work with Canada and other like-minded countries to restore peace to Ukraine as soon as possible. as possible,” Mora said.

“There is one thing for the outside world, in the UN Security Council, and there is another position that the president himself and his allies present to the Mexican public,” he said.

“Basically, the president is trying to address the more extreme elements within the MORENA coalition, who are very anti-American and believe that any expression of support for Ukraine is 100% support for all American actions in the world.

“Our posture is neutrality”

Following criticism from the new friendship group, López Obrador said that “we are not going to participate either for or against” the war in Ukraine.

“Our stance is one of neutrality,” he said.

“The president seems trapped,” Diaz Briseno said, “between the official stance his diplomats take at the UN and the flirtations some elements within his party have with Russia.

“There are elements of the MORENA party and the Labor party who have been to Russia, who have spoken to Russian officials, and Russian propaganda in Spanish is very widespread in Mexico.

“Russian media in many cases helps spread some of the conspiracy theories that the US is against AMLO.”

United States: the Mexican embassy, ​​a nest of Russian spies

US Ambassador to Mexico Ken Salazar was quick to respond to the friendship group with a public statement which said ‘we must be united with Ukraine’.

In Washington, the response came even faster when Air Force General Glen VanHerck, head of US Army Northern Command, appeared before a US Senate committee and dropped a bomb on the Russian presence in Mexico.

“I would like to point out that most of the GRU members around the world are currently in Mexico,” he said. “They are Russian intelligence personnel.”

GRU, or Glavnoye Razvedyvatelnoye Upravlenie, is the foreign intelligence service of the Russian military.

VanHerck said GRU Main Directorate officers used cover posts at the Russian Embassy in Mexico City to spy on the United States, among other tasks. (The United States has already expelled several Russian diplomats whom it has accused of using their diplomatic posts in Washington as a cover for espionage.)

Asked about the allegations at one of his regular press conferences, López Obrador said his government had no information and advised others to stay out of Mexico’s business.

“We must send them telegrams warning them that Mexico is not a colony of any foreign country,” he said.

The president himself has avoided publicly praising Vladimir Putin or justifying the attack on Ukraine. He said Mexico would not allow weapons to be sent to Ukraine or participate in sanctions against the Putin government.

But on Mexico’s left, traditional anti-Americanism and tolerance for autocratic regimes have mixed with a conspiratorial mindset to support Russia and suspicion of pro-Ukrainian narratives – and some members of López Obrador’s party have been more openly supportive.

One example is his youth wing in Mexico’s largest state, which released a hymn to the Russian dictator after the February 24 invasion:

“We reaffirm our moral and political support for the difficult decision that compelled the Russian government and President Vladimir Putin to engage in the self-defense of its people and, seeking to avoid a wider military conflict and to preserve world peace , to intervene militarily on Ukrainian territory to weaken the neo-Nazi forces leading the coup,” wrote the Morena Youth of the State of Mexico.

The statement accused the US, EU and NATO of provoking the conflict by attempting to unite Ukraine with the West “with the sole excuse of spreading democracy”.

“Warm greetings to our friends at the prestigious airline @aeroflot, hoping for rapid connectivity between nations and of course to Mexico City. I remind you that tourism is synonymous with peace, friendship and understanding between people”, he wrote in one of them. .

The pro-Putin musings of MORENA members angered the United States and Ukrainians.

Ukrainian Ambassador to Mexico Oksana Dramaretska called Lopez Obrador on Twitter and described the friendship group as “a disgrace”, prompting calls from some AMLO supporters for it to be expelled.

And on Monday, a Democratic congressman from Texas called on the Biden administration to revoke the US visas of all politicians who joined the group.

Representative Vicente González wrote in a letter to Secretary of State Antony Blinken and Secretary of Homeland Security Alejandro Mayorkas that the members of the Friendship Group “took this opportunity to shun the free world and stand with Putin “.

“On a personal note, it’s very sad to see this on the front page of a major outlet in Mexico,” he said. “It’s not something you see in other countries, and it shows how sympathetic elements of the ruling coalition in Mexico are to Russian claims.”

“In Russia, they say it’s in difficult times that you learn who your friends are,” he said.

2022-04-06
Previous Post: What does Russia’s war in Ukraine mean for Iraq?
Next Post: How Janus Henderson’s Daniel Grana Predicted War Between Russia and Ukraine