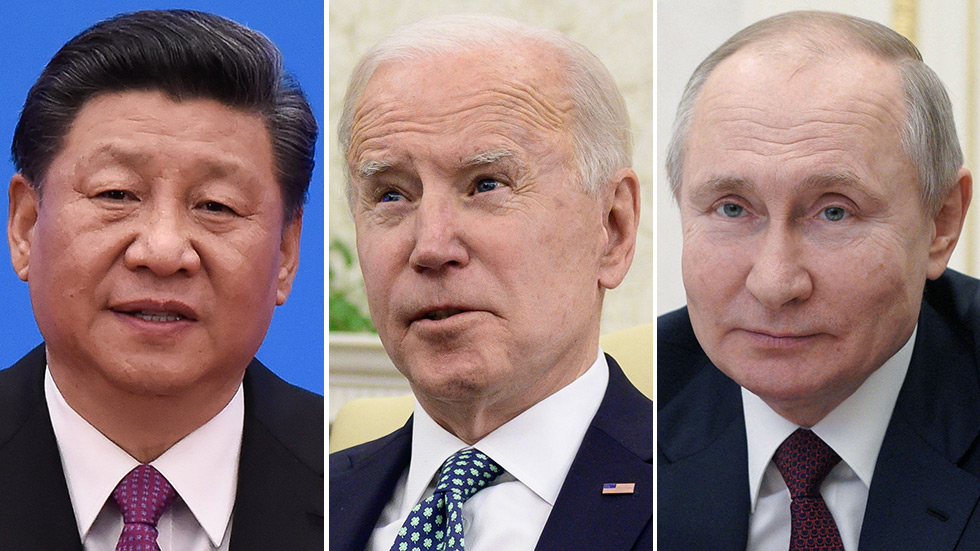 World leaders were universally shocked by Russia’s invasion of Ukraine, with two exceptions. President Biden said US intelligence gave him enough notice. China’s Xi Jinping met Vladimir Putin at the Beijing Olympics, where they jointly issued a statement of ‘limitless strategic partnership’ which included opposition to NATO expansion – Putin’s original rationale for invading the Ukraine – and to the colorful revolutions of Eastern Europe that began with Orange Ukrainian Revolution in 2004.

Putin’s two months of savagery, which Biden called war crimes and genocide, are consistent with his 23-year record in Chechnya, Georgia, Syria, eastern Ukraine and Crimea. With political assassinations in Russia, his actions should have come as no surprise.

Western governments and business interests have chosen to look the other way, including successive Democratic and Republican administrations, during Putin’s tenure. Deceived and/or intimidated, they hesitated to challenge the one who has now overcome the depredations of the Serbian war criminal Slobodan Milošević and whose inhuman aggressiveness has made him in the eyes of the world a reincarnation of Adolf Hitler and Joseph Stalin. Even his mistress, accused of hiding her wealth, is not punished for fear of offending Putin.

As Xi watches Putin’s costly but incremental territorial gains in Ukraine, he certainly draws lessons for his own plan to attack Taiwan. Both positive and negative signals will either embolden or inhibit it.

The surprisingly poor performance of the Russian military in the face of valiant and skilled Ukrainian resistance could lead Xi to question the wisdom of launching a Taiwan invasion scenario. However, it cannot be assumed that the Chinese and the Taiwanese will play the same respective roles as the incompetent Russians and the seasoned Ukrainians. Taiwan’s reserve force’s minimum level of training – four months – does not bode well for a ground defense against a well-trained professional People’s Liberation Army invasion force after a campaign of aerial bombardment and missiles incessant.

Geographical factors would also influence the course of a conflict across the strait, in opposite directions. China would have to cross 100 miles of water to occupy Taiwan no matter how much long-range destruction and havoc its planes, missiles and navy might wreak on the island. Ukraine’s sinking of the Russian Black Sea flagship is a sobering prediction of what the PLA Navy would face.

Yet the fact that Taiwan is a modestly sized island compared to Ukraine’s vast land expanse allows Beijing to focus its attack on a much smaller target area and use its fires more effectively – and for a longer duration.

China might also be tempted to adopt Russia’s barbaric siege tactic on Mariupol: beat the place to near submission, then encircle the trapped population to prevent either an escape or vital food resupplies, in water and weapons. As Putin said, the cordon around the city to starve its defenders is so tight that “not even a fly could pass”.

A blockade of the entire island of Taiwan, in particular its main ports of Keelung and Kaohsiung, is conceivable. During the Taiwan Strait Crisis of 1995-1996, Chinese missile strikes twice closed the strait to all sea and air trade, causing shipping and insurance rates to skyrocket for the entire the duration of the crisis.

For those still inclined to trust Beijing’s assurances — for example, Xi’s personal promise to President Obama that China would not militarize its man-made islands in the South China Sea — the language of its anti-secession law ( ASL) from 2005 offers false comfort. After threatening to use “non-peaceful means” to conquer Taiwan, the FSA goes on to say that “the state will do its utmost to protect the lives, property and other legitimate rights and interests of Taiwanese civilians and foreign nationals in Taiwan”. Would Xi wage a more humane war of aggression than Putin does?

More compelling in limiting a scorched earth campaign in Taiwan is the island’s indispensable economic value, particularly its unique status as a global semiconductor powerhouse.

Beijing must also consider the costs that Putin’s war inflicts on the Russian economy. Although China is much stronger and richer, its interconnectedness with the global economy makes it both more and less vulnerable to the kind of punitive economic sanctions imposed on Russia.

Then there are the reputational costs that Russia incurs due to its Nazi-like performance in Ukraine. Beijing has extensive experience in deflecting condemnation of its own crimes against the international order, including aggression against the sovereignty of South Korea, Tibet and East Turkestan; the Tiananmen Square massacre; and the Uyghur genocide. The Chinese Communist Party operates on the cardinal principle of tyranny: it is better to be feared than loved.

This does not mean that public opinion is irrelevant, especially here where it encroaches on the legitimacy of the regime. But here, the Russian-Ukrainian example is actually an encouragement for Beijing. Despite some disenchantment with Putin’s war, especially among young Russians, a recent poll showed that a significant majority of the total population supports Putin’s “special military operation” in Ukraine. Soviet-style disinformation and propaganda so far seem to have been successful in denying Russians the truth and fueling aggressive nationalism.

China’s leaders have demonstrated their mastery of information warfare against their own people, especially in the face of lukewarm Western countermeasures reluctant to challenge the very legitimacy of the communist regime.

The still open question is whether the West will continue the delusional policies on China and Taiwan that have proven so self-defeating in the decades-long weak response to Putin’s problem.

Secretary of State Antony Blinken acknowledged the connection between the two situations in remarks last week: “We understand that when this international system is undermined anywhere and does so with impunity, without challenge, it is degraded everywhere. And that’s why not only have we championed these principles in Ukraine, in the context of Ukraine, but also in the Indo-Pacific as well.

The West’s biggest mistake was not to respond early enough to Putin’s threats to the international order with both economic and military responses, despite all the multilateral commitments to Ukraine’s security and other former Soviet states.

To this day, despite the horrors that have unfolded, the Biden administration and the NATO alliance it leads refuse not only to get directly involved, but even to supply all the weapons systems whose Ukraine desperately needs to defend itself, like fighter jets. They are afraid of causing the same alleged Russian escalation that they would get anyway by defending NATO itself. Biden called it a “sacred obligation” to distinguish it from the West’s untreaty commitment to Ukraine.

Strategic ambiguity has failed catastrophically for Ukraine. Biden must immediately replace it with strategic clarity for Taiwan if he is not to suffer the same tragic fate.

Joseph Bosco was China Country Director for the Secretary of Defense from 2005 to 2006 and Asia-Pacific Director of Humanitarian Assistance and Disaster Relief from 2009 to 2010. He served in the Pentagon when Vladimir Putin invaded Georgia and was involved in the Department of Defense. discussions on the American response. Follow him on Twitter @BoscoJosephA.

2022-04-26
Previous Post: How Russia’s war is felt in central Ukraine
Next Post: Russia’s war in Ukraine has caused a housing crisis. It’s the exit