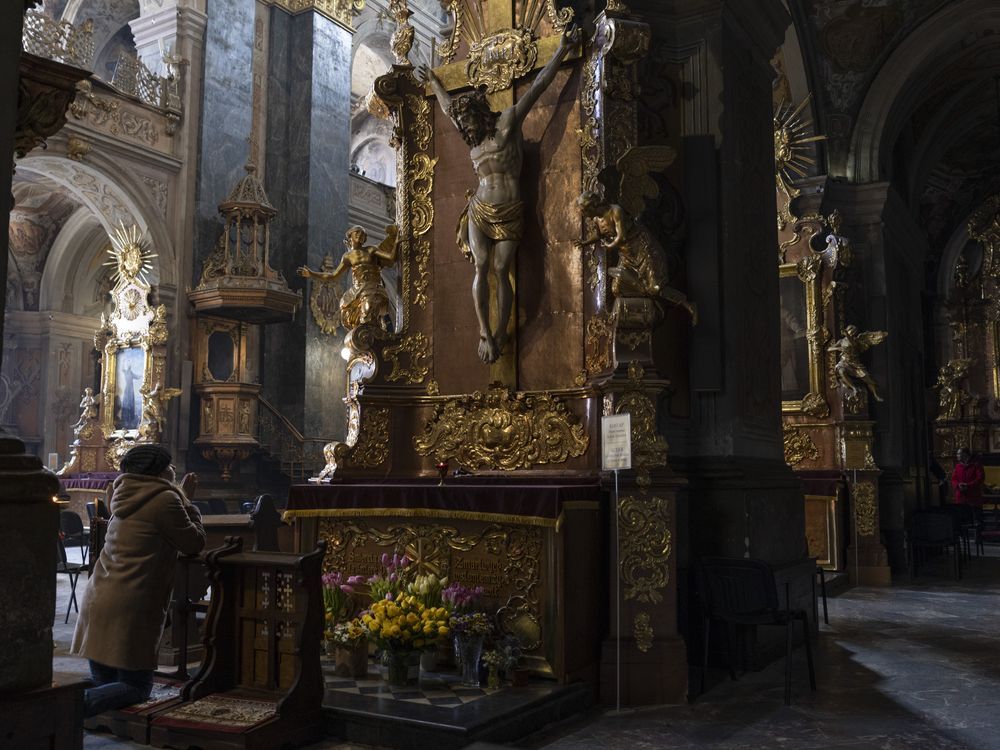 Russia’s War on Ukraine and the Grapes of Wrath

I have already written that I am a man of conflicting faith. Yet, even though I lecture as a professor of political geography, I can only witness the agony of Ukraine through the prism of my religion, the faith of my Ukrainian Catholic ancestors. For this, I confess, with all my heart. And so the tortures of Ukraine became, so to speak, my daily bread. I eat his distress, but gag as I do, symbolically consuming the flesh and blood of those now murdered by the Russian legions. The land of my predecessors has once again become a Golgotha, a place of skulls. That’s all Vladimir Putin does. This is happening as we approach the holiest day in the Christian calendar, Easter, marking the triumphant resurrection from the dead of Jesus, the Christ.

What is happening as I write is only a prelude to the next Passion of Ukraine, an outrage that is soon to come. While we stand by, an entire country will be scourged and a concerted attempt will be made for its extinction. Even before that, we will mark a kind of Lent for Ukraine, indeed these 40 days are already upon us. Aside from the liturgical calendar, this is a time for Christians around the world to reflect on what Jesus endured after he went alone into the desert to pray and fast, and where he was sorely tempted by Satan. Ukrainians are now in that same desert, being tested. The fate of Europe may well depend on their reaction.

Their executioner is none other than Putin. His drawings are diabolical. Left unchecked, this KGB man in the Kremlin, this perpetual president of the so-called Russian “Federation”, is going to plunder the world that you and I knew a few days ago. To a large extent it has already done so. The coming new world order, from which Ukraine is excised by force, will not please you. We should have guarded against that day, for didn’t WB Yeates sound the bugle call more than a century ago, warning of a moment in human history when:

The bloody tide is unleashed, and everywhere

The ceremony of innocence is drowned;

The best lack conviction, while the worst

They are full of passionate intensity.

This brute beast has now arrived. He is Putin, the slumped czar of Russia. Soon he will offer a kind of communion to those he sacrifices, ironically in the very attic of Europe. All they have to do is eat his bread, acquiesce to his corrupt view that Ukraine never existed and never will exist, agree to erase from memory the last three decades of independence, as if that era were nothing more than a delirious mirage, better forgotten. If the Ukrainians broke bread with Putin, if they accepted this first temptation, their nation would return to the Russky Mir, absorbed in the oblivion of its imperium.

They didn’t and they won’t. This explains Putin’s rage, his frustrated helplessness. Yet it is far from exhausted. He will therefore try to induce the Ukrainians to lay down their arms, insisting that their continued resistance is futile, reminding them, and in this he will tell the truth, that they have not found much real help in this world, have no angels waiting to catch them if they engage in existential combat against his minions. Why jump, he will ask the “Little Russians” – as he contemptuously refers to Ukrainians – when all can see there are no angels below ready to break the fall.

Ukrainians will reject this second temptation. They know they are alone. They are appalled, but it is not a people ready to accept the yoke of Putin, the mark of this beast. Even when his latest offer arrives, when he offers them the chance to join his new Russian empire, dominating with him all they can see, they won’t back down. Why ? Because, since 1991, from the first days of Ukraine’s independence, and in fact for many centuries before our era, Ukrainians have sought only to return their country to its rightful place in Europe. They never coveted the lands or wealth of their neighbors. On the contrary, by their deeds and their words, especially over the past three decades, they have stood firmly with the liberal democratic world, committed to a rules-based international order. They believed this was the surest way to ensure real peace, building an architecture of stability supported by the best angels they were told to believe were intrinsic to the nature of Western civilization. Since February 24, 2022, they have bitterly learned the fallacy of this faith. Now they fight and die alone. They saw the face of Judas.

And so a jubilant Putin appears before us, the very antithesis of kindness. Not a deranged despot but rather an ever-smart secret policeman, this trickster, a relentless liar, nevertheless proves exposed as nothing less than a ruthless and wicked enemy of the light, anathema to everything any decent human being understands by words like truth or goodwill. If you think I’m exaggerating, ask any Ukrainian. Yet much of the rest of the world still pretends, or prefers, not to see Putin for what he really is: a species of evil now unleashed on this world. He must be sent back to the pit. There is no alternative.

Tragically, there is worse to come for Ukraine. NATO countries, like that Pilate of old, have washed their hands of the fate of Ukraine, abandoning an entire nation to the savagery of Putin and his confederates. His plans are clear. They do not seek the surrender of Ukraine but a national extinction, the erasure of this country from the maps of the world. Putin’s agenda is nothing less than genocidal. Those who stand idly by and watch this happen cannot remain innocent. Their platitudes will not stop Putin.

Someday, surely, a time for atonement will come. These Russians who are helping Putin today have the blood of innocent Ukrainians on their hands, and this blood will rain down on the heads of their children and their children’s children, a baptism that will stain them forever, marking them with the mark of Cain. This is how they will be recognized when an even greater enemy arrives to defeat Muscovy. Too late they will remember, as they lament and lament, that the seeds of these future wars, of their destruction, were planted in our time because of their slavish obedience to Putin, even as the very soil of Ukraine was fertilized by the flesh of its many martyrs. When they should have organized a real Russian revolution, they stood idly by.

As for the Ukrainians who survive, or somehow escape this war, their memories will forever be steeped in a bitterness that can never be eradicated. These grapes of wrath will sooner or later be harvested and then pressed. Over time, this juice will become a nectar of aging vengeance, a wine that can never assuage or quench their deep thirst for revenge, but an elixir that will support a sustained cause, defiling even those yet unborn.

Ukrainians have never been Russian, are not now, and certainly never will be after suffering the devastation and dismemberment of the days of the Passion of Ukraine. The only ‘good news’ offered, a balm for those who endure in one way or another, is that even though so many people were sacrificed to a Moloch, their Ukraine won this war, its real struggle for independence. Ukraine is now forever lost to Moscow. Regardless of the results on the battlefield, Putin’s imperial project has been polluted and rendered putrid, its eventual failure certain. Godspeed that day. Until then, this will be Ukraine’s only gospel, the only good news emerging from this apocalypse now.

Yes, the Ukrainian nation is still resisting the Russian enemy. This fierce struggle reminds the world how much tyranny must be faced. Yet the heroic Ukraine we see before us cannot last forever. Whether it’s tomorrow, or the day after, or even weeks from now, those who wage this just war to defend their homeland will be slaughtered, many of the country’s best will be slaughtered or forced into exile. The passion of Ukraine will then end. As a result of this holocaust, what remains of the modern Ukrainian state will be buried. But do not think that this represents a definitive solution to the Ukrainian question. I tell you now no. For just as surely as the crucifixion of Ukraine is upon us, Ukraine will also rise from its grave dug by the Russians. With this Ukrainian resurrection, there will be a settling of accounts. Those who shed Ukraine’s blood, and those who abandoned it, will not escape judgment. Know also that the second coming of Ukraine will not be the harbinger of salvation for the West. Putin, and all those who allowed his predators, are the damned of tomorrow. One day they will drink the juice oozing from these grapes of wrath.

Lubomyr Luciuk is a Chair of Ukrainian Studies at the University of Toronto and a professor at the Royal Military College of Canada.

2022-03-11
Previous Post: Zelensky is the kind of man Putin-loving conservatives need
Next Post: The Russian population will find it difficult to sustain a long conflict