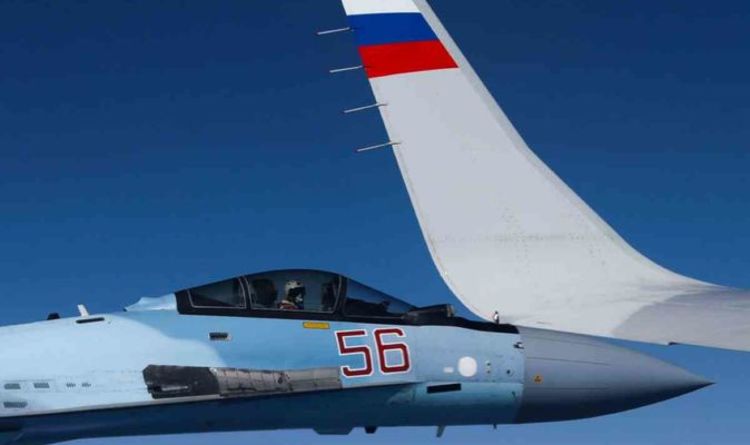 Moscow is conducting aerial exercises involving missile launches and bomber movements over the disputed region. Currently, 50 Russian fighters, bombers and attack aircraft are taking part in “exercises over the Black Sea”. A report by Russia’s independent Interfax news agency said war games organized by Moscow are likely to heighten tensions in the region.

The Interfax report said: “During the exercises, aircraft will conduct missile launches and bombardments of naval targets.

The Russian Air Force and the Russian Black Sea Fleet are also to perform “tasks to accompany ship strike groups and actions within the framework of reconnaissance strike complexes while ensuring security in the Black Sea “.

The military war games saw the participation of naval planes and helicopters from the Russian Black Sea Fleet.

The naval deployment from Moscow also involves the frigate Admiral Makarov, which is equipped with Caliber cruise missiles.

Russia is also deploying its Samum hovercraft and the Ivan Golubets minesweeper in the Black Sea region near Crimea.

In July 2014, 298 people were killed after Malaysia Airlines Boeing 777 flight MH17 was shot down by pro-Russian rebels operating from eastern Ukraine.

Vladimir Putin’s show of force comes as intelligence suggests Russia is concentrating its military power near the Ukrainian border.

Now, Russian military videos have depicted a detachment of Russian Navy warships moving from the Caspian Sea to the Black Sea.

This is the first time that a large number of warships have moved from the Caspian Sea to the Black Sea since Soviet times.

There have been more intelligence reports showing Russian troops moving by rail in the Krasnodar, Rostov and Bryansk regions near the Ukrainian border.

Today, nearly 100,000 Russian soldiers are believed to be massed on the border with Ukraine.