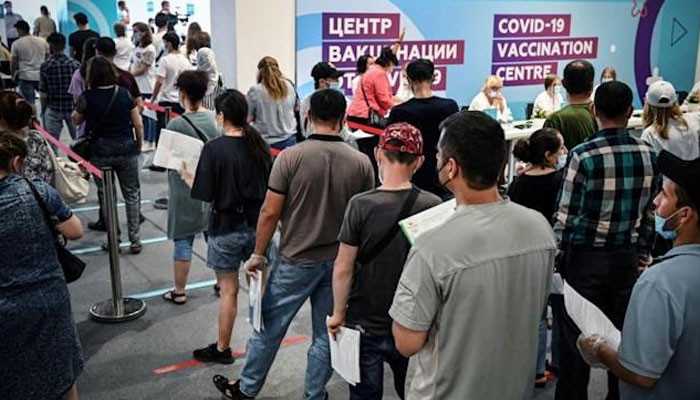 MOSCOW — Russia’s population fell by more than a million people in 2021, statistics agency Rosstat reported on Friday, a historic decline not seen since the collapse of the Soviet Union.

Ongoing demographic issues have been exacerbated by the pandemic, with Rosstat figures showing more than 660,000 people have died from the coronavirus since health officials recorded the first case in the country.

The new figures continue a downward trend from the previous year, when Russia’s population fell by more than half a million.

The Covid-related death figures released by Rosstat on Friday are more than double those released by a government pandemic tracking website which reports 329,443 total deaths.

Russia has struggled to stem the pandemic due to a slow vaccination campaign coupled with limited restrictive measures and widespread non-compliance with mask-wearing in public places.

The toll of the pandemic is exacerbating the demographic crisis, linked to a low birth rate and a short life expectancy, which Russia has been facing for 30 years.

Birth rates have fallen because the generation now becoming parents was born in the 1990s, when the birth rate plunged due to economic uncertainties after the collapse of the Soviet Union.

The number of births per woman is around 1.5, well below the minimum of 2.1 necessary for population renewal.

Russia’s shrinking population has been at the top of President Vladimir Putin‘s national agenda since he came to power more than two decades ago.

In his addresses to the nation, Putin frequently encourages Russians to have more children and adopt a healthier lifestyle to improve their life expectancy.

The government has introduced a number of financial incentives for parents with more than one child, such as cash bonuses and favorable mortgage rates.

At his annual press conference last December, Putin pointed out that 146 million people are not enough for the country from a “geopolitical point of view” and leave labor shortages.

He added that it is important to show that it is a “joy to have children” and that there is “no greater happiness in life and in the world”.

“The demographic crisis is definitely a failure of state policy,” said Sergei Zakharov, a demography expert at the Moscow-based Higher School of Economics.

He told AFP that measures to increase the birth rate encourage families to have children earlier but do not change the number of children they want in total.

He said the government’s influence on birth rates is “limited” and that shifting births to an earlier period will lead to a “demographic gap” in the future.

For Stepan Goncharov of the independent pollster Levada Center, the low birth rate is linked to widespread “uncertainty about the future”.

Russia’s standard of living has steadily deteriorated since 2014, with the economy strained by repeated Western sanctions, reliance on the oil and gas sector and widespread corruption.

“People didn’t stop buying, and their income and savings went down,” Goncharov said.

According to a survey carried out last year by the recruitment site SuperJob, 43% of Russians have no savings.

“People don’t save money and plan for the family’s future,” Goncharov added.