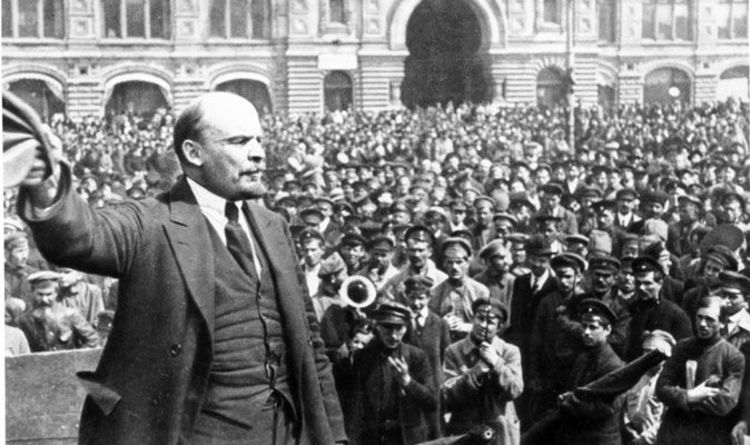 My late father-in-law was a very human symbol of the effect of the Russian communist revolution. In his swaddling, his parents took him from Russia because, as grain merchants, they were the class enemy.

They settled in Germany, only to flee in 1938 because, as Jews, they were the enemy of the race. The hurricane of history unleashed by events in Russia a century ago finally swept the family away in the quintessentially English suburb of Kew.

There Robert joined the British Army to fight Nazism, itself a reaction to the ideology of Communism. The world’s first Marxist experiment still has cheerleaders in the offices of Momentum, but the reality is that the Russian Revolution, one of the most important and profound events in history, started badly and s ended worse.

There is nothing to celebrate. The year 1917 actually saw two revolutions in Russia. The February Revolution (in March, according to the modern calendar) deposed Tsar Nicholas II after more than 300 years of rule by the Romanov dynasty, ushering in a Provisional Government that implemented progressive reforms such as universal suffrage.

The Bolsheviks, a small band of Marxist diehards led by Vladimir Lenin, staged a coup in October (November in the new calendar) that saw them seize power and found the Union of Soviet Socialist Republics.

It’s a familiar, sweaty question in school: What were the causes of the Russian Revolution? An hour is barely enough to list them, let alone explain them.

Factors range from the impoverishment of industrial workers to Russia’s abysmal performance in World War I.

Political pundits both inside and outside Russia had long predicted the downfall of the Romanovs. The autocratic tsar had resolutely refused democracy.

In 1917 in Russia there were almost endless grievances. Lenin promised a “land, bread and peace” snake oil solution.

In truth, the Bolsheviks exploited the fears of the workers, the poor and the peasantry for their own ideological ends. Famously, according to Marx’s theory of dialectical materialism, all of history is “the history of the class struggle” with the end result being the seizure of power by the “proletariat”, the workers, via revolution.

Lenin’s addition to Marxism was to claim that a “vanguard” was needed to lead the workers into the new dawn. Fortunately for Lenin, the necessary vanguard was his entirely self-proclaimed Bolshevik Party.

Lenin had a job and he was good at it. He was a revolutionary fully convinced of the justice of his communist cause. The Germans, adversaries of Russia during the First World War, knew the value of Lenin.

They arranged his journey by train from exile in Switzerland to Russia, knowing that he would cause upheaval. As often, Winston Churchill had the best lines. Lenin, writes Churchill, was transported “in a leaden truck like a plague bacillus”.

Lenin did not disappoint his German sponsors. As soon as he arrived at the Bolshevik headquarters in Petrograd, he gave a lecture for two hours straight. It was eight o’clock in the morning.

The Bolsheviks, previously aimless, became ardent and directed towards power. One observer compared the audience to “bewitched disciples”. On the night of November 6, the Bolsheviks launched their coup.

Lenin delivers a speech at the demonstration

You have to admire their audacity. They and their allies, the Left Social Revolutionaries, had majorities in the “soviets”, the workers’ and soldiers’ councils, of the national capital, Petrograd, and the second city, Moscow.

But outside the industrial districts of these two metropolises, in the hilly vastness of rural Russia, the Bolsheviks were only an insignificant political point.

In Petrograd, the insurgents cut off the telephones of the Winter Palace, the seat of the legal – if chaotic – provisional government led by Prime Minister Alexander Kerensky, a moderate socialist.

Without a telephone, Kerensky was ridiculously unable to summon loyalist Cossacks and army regiments to protect the legitimate government. The Petrograd Soviet issued a triumphal proclamation asserting, with some truth, “rarely has an insurrection succeeded so well”.

Kerensky went into hiding for a day and then drove away, disguised as a sailor, never to see Russia again. Ten Days That Shook The World, the eyewitness account of American journalist John Reed in November 1917, captured exactly the excitement the revolution stirred among sympathizers on the streets and in the factories of Petrograd (Reed was the subject of the film Hollywood Reds of 1981, with Warren Beatty).

While the actual coup was carried out by only a few hundred, hundreds of thousands of workers and soldiers expected a new and better existence under communism.

The future seemed to belong to them, and no longer to the bosses or the emperors. Reed recounted a truck tour around the outskirts of Petrograd in the early feverish days of the coup: “Across the horizon stretched the sparkling lights of the capital, infinitely more splendid by night than by day, dam of jewels piled on the arid plain.

“The old worker who drove held the steering wheel with one hand, while with the other he swept the gleaming capital with an exultant gesture. ‘Mine!’ he cried, his face alight. ‘All mine now! My Petrograd!”.

Such high hopes, so quickly and completely dashed. Once in power, the Bolsheviks abolished private ownership of land. Free and fair elections were promised.

Vladimir Lenin with Josef Stalin in 1923

When the Bolsheviks lost the election with a measly 24% of the vote (and it was rigged), Lenin ordered the Red Guard – the party’s private army – to shut down the elected assembly.

Instead, he installed himself as a dictator. Russia descended into civil war, ultimately won by the “red” Bolsheviks over their “white” adversaries. The usual fate of White Russians if captured was to be shot against the wall or, when the bullets were low, hanged.

All material was scarce in the brave new world of communism. Except blood, which was the motive of the Revolution. In July 1918, the royal family, including the five children, was shot, bludgeoned and bayoneted to death in the basement of an apartment building in Yekaterinburg.

Their corpses were mutilated before being burned, doused with acid and thrown into a pit in the forest. The Romanov death order came directly from Lenin, hand-delivered by his driver.

Eventually the Bolsheviks turned around. Sailors at the Kronstadt naval base, previously staunch supporters of the revolution, demanded modest reforms, including freedom of speech for all workers’ parties and the release of socialist political prisoners.

Lenin called the sailors “black hundred”, nationalist paramilitaries, and sent in his Red Guards. Thousands of sailors were killed or imprisoned. Kronstadt was irrefutable proof that the Bolsheviks governed only for themselves.

Lenin had no real sympathy for the poor, nor for them improving their lot. Absolute power was his goal. Violence was his means. The communist plan to revive the country’s dilapidated economy has failed.

In 1921, the year of the Kronstadt protests, mine and factory output was 20% of pre-Great War levels. To prevent further protests, Lenin introduced a new economic policy allowing the kulaks, the peasants, to sell their surplus harvest for profit.

But when his successor, Stalin, subjected them to forced collectivization in the 1930s, two million kulaks died of starvation or brutality. Stalin said, “A single death is a tragedy; a million dead is a statistic.

Blood flowed and flowed. In 1932 and 1933, Stalin led the Holodomor in Soviet Ukraine, a deliberate mass starvation – intended to halt Ukrainian independence – which killed an additional four million Russian citizens.

The Black Book of Communism, edited by French academic historian Stéphane Courtois, lists the number of people killed by the communist dictatorship in Russia before its eventual fall, in 1991, at 20 million.

Every Marxist state since has also been an exercise in tyranny and terror, be it Mao’s China, Castro’s Cuba, Pol Pot’s Cambodia or Kim Il-Sung’s North Korea.

Worldwide, communism was responsible for the deaths of 96 million people. All the November revolution brought to the Russian people was a change of authoritarian regime.

They swapped the Romanovs for the Red Tsars of Communism. All that 1917 brought to the world was oppression, blood and tragedy.