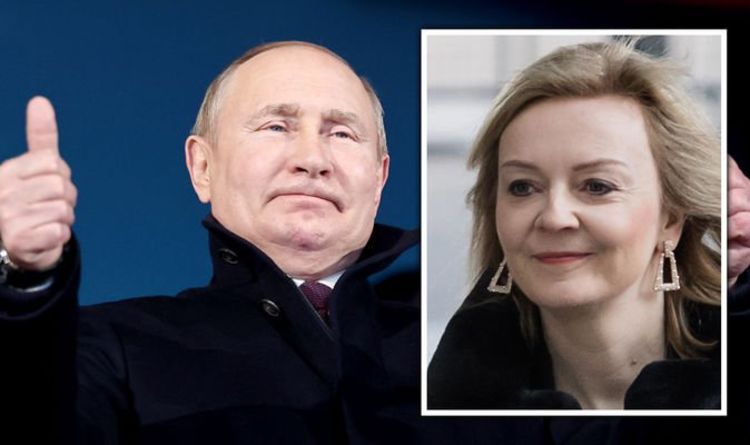 The Foreign Minister has planned a trip to the Russian capital to meet her Moscow counterpart, Sergei Lavrov. The Foreign Secretary’s visit to Russia would be the first by a British official since 2017, when Boris Johnson met Mr Lavrov.

However, Robert Jenrick, Conservative MP for Newark, warned his party colleague against the visit.

Speaking to BBC Radio 4’s The Westminster Hour, the former housing secretary said he was not sure Ms Truss’ visit was “wise”.

He said: “I’m not sure it’s actually wise to go to Moscow.

“I think it honors Vladimir Putin and plays into his game… I just question the common sense of going to Moscow and honoring Vladimir Putin at a time when he is so aggressive towards Ukraine.

On Sunday, Ms Truss spoke with Dmytro Kuleba, Ukraine’s foreign minister, about how “the depth” of Russia’s attempts to threaten Ukraine was “clear”.

Ms Truss missed a trip to Ukraine with the Prime Minister after testing positive for COVID-19.

In a post on Twitter, she said: “The depths of Russian attempts to overthrow and threaten Ukraine are clear.

“Russia’s actions show that its claims that there is no invasion plan are false.

“We and our allies are united in support for Ukraine and in our determination to increase the cost to Russia if they take further action.”

The foreign minister also said in another message that Moscow “must cease its destabilizing activities against Ukraine”, adding: “Any Russian incursion would entail significant costs”.

It comes after Mr Johnson visited Ukraine on Tuesday, where he accused Russia of holding a gun to Ukraine’s head.

The Prime Minister spoke to Ukrainian President Volodymyr Zelensky and warned of a “clear and imminent danger” of an attack from Russia and the prospect of a “European war, a war in its own right”.

Mr Johnson accused Putin of “trying to redraw the security map of Europe and to impose a new Yalta, new zones of influence”.

He then said: “It would not be only Ukraine that would be brought back into the Russian zone of influence. It would be Georgia and Moldova and other countries.

He said: “It makes sense to talk to anyone. Russia and President Putin are open to communication with everyone.

“Even to someone who is completely confused, he is ready to provide exhaustive explanations.”

“If anyone needs saving from anything, it’s from the world, from the stupidity and ignorance of British politicians.”

It also comes after Mikhail Khodorkovsky, a former Russian oligarch, said the UK providing arms and training to Ukrainian forces “shows Putin that war won’t be that easy”.

2022-02-07
Previous Post: For NATO, the threat of war between Ukraine and Russia has become clearer
Next Post: Europe’s gas supply could be a casualty of Ukraine-Russia war