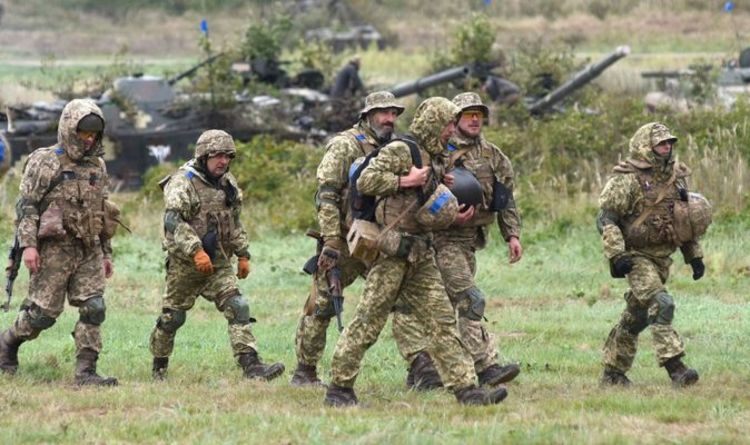 Ukraine should “consolidate its strength” and join NATO, says soldier

The exercises were confirmed by Ukrainian TV Dom. Ukraine, which is seeking to join the North Atlantic Treaty Organization (NATO), has received a series of consignments of US ammunition and Javelin missiles since 2018, drawing criticism from Moscow. Kiev accuses Moscow of having assembled tens of thousands of soldiers for a possible offensive, raising fears that a latent conflict in the eastern Donbass region in Ukraine could degenerate into open war between neighbors.

Russia denies planning any attack but accuses Ukraine and the United States of destabilizing behavior and has called for security guarantees against NATO’s eastward expansion.

Russia has organized its own military exercises nearby, the Interfax news agency reported on Wednesday.

SU-30 fighter jets and SU-24 bombers from the Black Sea Fleet carried out aerial refueling exercises over Crimea, the Black Sea peninsula which Russia annexed to Ukraine in 2014.

Interfax quoted the Russian Black Sea Fleet as saying, “The flights were carried out in the skies over Crimea.

Senior Ukrainian security official Oleksiy Danilov said on Wednesday that 122,000 Russian troops were 200 km (124) from the border with Ukraine.

Danilov said last week that Russia would need at least 500,000 to 600,000 troops at the border “in order to keep the situation under control in the event of an offensive.”

He also said that Russia could increase the number of its troops very quickly and at any time, but would need more than 24 hours to bring enough troops to the border to stage an invasion.

Ukraine is at the center of consultations between Western allies and Russia, which has been invited to open negotiations in the so-called Norman format, which would bring together representatives from France, Germany, Russia and Ukraine .

Dialogue with Moscow is necessary, whether in the Norman format or through talks in the Russia-NATO Council, German Foreign Minister Annalena Baerbock said on Wednesday.

Speaking earlier this month, British Foreign Secretary Liz Truss said the West and its allies were “united” to threaten “massive consequences” for any Russian invasion of neighboring Ukraine.

DO NOT MISS :
EU news: Brussels ‘plots European FBI’ with powers in all member states [REVEAL]
Nancy Pelosi becomes pissed off after being confronted with anti-Biden chants in key speech [INSIGHT]
Donald Trump was booed by the public after revealing his “Don’t do it, don’t do it!” [SPOTLIGHT]

Speaking to reporters at a press conference, Ms Truss said: “We have sent a powerful signal to our adversaries and to our allies.

“We have been clear that any Russian incursion into Ukraine would have massive consequences for which there would be a high cost.

“We have also shown that we stand up for freedom and democracy and the right of people around the world to live free from oppression.

“We must advocate for individual humanity and dignity, which are at the heart of our free and democratic societies.”

Russia has already annexed Crimea, part of Ukraine, and tension is mounting again, with Russia massing thousands of troops on the border with its neighbor.

The Foreign Minister said: “We have sent a very clear united message to Vladimir Putin from this G7 meeting.

“And we are very clear that there will be serious consequences if this incursion took place.

“It’s about dissuading Russia from taking this.”

In a statement released on Sunday by G7 ministers, they reminded Moscow that “any use of force to change borders is strictly prohibited by international law”, pledging to inflict “a high cost” on Russia if it was mobilizing against Kiev.

At the press conference, Ms Truss was also asked about the “billions” of Russian money flowing into London.

She said: “We already have very strict anti-corruption and anti-money laundering rules in the UK.

“But let’s be clear, when the UK wanted to send clear messages and achieve clear targets, we were prepared to use economic sanctions. So we are looking at all options.”