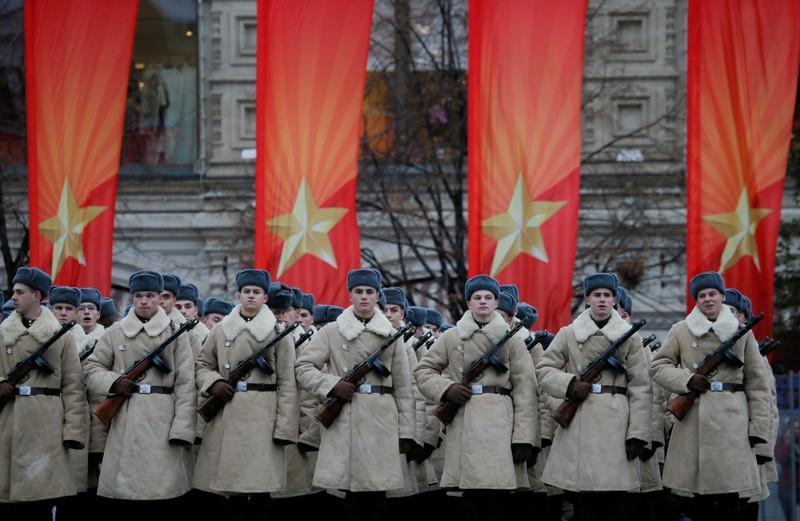 MOSCOW (Reuters) – Vladimir Putin stayed away from events marking the centenary of the Russian Revolution on Tuesday, a world-changing event but one that has awkward associations for the former KGB agent who was trained to contain dissent, not to celebrate it.

In Soviet times, missile launchers rumbled across Red Square on November 7, Soviet leaders watched from the top of the mausoleum of Vladimir Lenin – father of the Bolshevik Revolution – and the anniversary of the uprising was a public holiday.

Red Square hosted a military parade on Tuesday, but it was mostly a stylized historical re-enactment of a 1941 World War II Soviet event and gave only a brief nod to the famous uprising . It was not broadcast live on state television and only featured a brief segment of the 1917 revolution with Red Army soldiers.

The centenary, Putin’s spokesman said, was a routine working day for the president who had several meetings in the Kremlin.

Accused by the opposition of having morphed into a cross between a Soviet-style autocrat and a czar and considering possible re-election next year, the 65-year-old Russian leader has spent years preaching stability while denouncing the uprisings in the former Soviet Union and the Middle East.

Riot police have cracked down on a series of anti-government protests this year, carrying out mass detentions, and opposition leader and fierce Putin critic Alexei Navalny has been jailed three times for breaking the rules public demonstrations.

Putin, in his quest to weld together a proud national identity, chose parts of Russia‘s Soviet past, such as its victory in World War II and its success in space. But while he does not emphasize the role of communism in these exploits, he has at times adopted an ambivalent tone, once calling the Soviet collapse of 1991 the greatest geopolitical catastrophe of the 20th century.

In rare comments on the subject before the centenary, Putin made it clear that he thought it would have been better if the 1917 revolution had never happened and that he believed there was nothing to celebrate.

“… We see how ambiguous his results were, how negative the consequences and, we must recognize, the positive consequences of these events are closely intertwined,” Putin told a meeting of scholars on last month.

“Wasn’t it possible to follow an evolutionary path rather than experience a revolution? Couldn’t we have evolved through a progressive and coherent movement rather than at the cost of destroying our statehood and ruthlessly slicing millions of human lives?

Putin chose his words carefully. The centenary may leave him with mixed feelings, but it remains a holy anniversary for the Russian Communist Party and for many older Russians.

Although it is the second largest party in the lower house of parliament after the pro-Kremlin party United Russia, the Russian Communist Party today wields little real influence and votes with the Kremlin on most important issues.

But his supporters, who have held a week-long series of celebratory events to mark the revolution’s centenary and were due to gather in Moscow later on Tuesday, believe their time will come.

“Capitalism stumbles from one crisis to another,” Russian Communist Party veteran Gennady Zyuganov wrote in a centenary congratulatory note to his supporters.

“We are convinced that the sun of socialism will rise again on Russia and the whole world.”