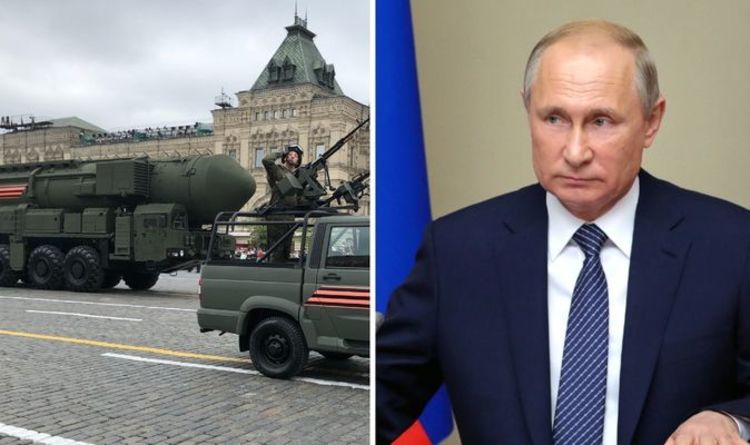 Russia on Monday threatened to deploy nuclear intermediate-range missiles (INF) in Europe, amid escalating tensions between Russia and Ukraine. The missiles have a maximum range of 5,000 km, which means that they would be able to hit several European capitals.

INF missiles were banned until 2019, when Washington resigned from a deal between Russia and the United States citing Russian violations.

They were initially banned in 1987 under a treaty signed between former Soviet leader Mikhail Gorbachev and US President Ronald Regan.

Russian Deputy Foreign Minister Sergei Ryabkoc has warned that the Kremlin could use the weapons if NATO does not rule out using them itself.

He warned that Moscow would “respond militarily” if NATO attempted to expand east, but denied that Russia was planning an invasion of Ukraine.

Speaking to state agency RIA Novosti, Ryabkov said: “There will be a confrontation, this will be the next step, [previously banned weapons] will appear on our side.

“They don’t exist anymore, we have a unilateral moratorium.”

He also said Russian officials had a “complete lack of confidence” in NATO.

A guarantee that NATO did not plan to expand further east was one of Mr. Putin’s “red lines” during his phone call with President Joe Biden earlier in December.

The two leaders held a two-hour videoconference on December 7 in an attempt to ease tensions between the two sides.

Mr. Biden warned Mr. Putin that the West would impose “strong economic and other measures” on the country if it invaded Ukraine.

This was echoed by British Prime Minister Boris Johnson, who warned Mr Putin in a phone call on Monday that Moscow would face “serious consequences” if it encroached further on Ukrainian territory, expressing “deep concern” facing the military reinforcement of Moscow on the border.

A Downing Street spokesperson added that Mr Johnson underlined “the UK’s commitment to Ukraine’s territory and sovereignty and warned that any destabilizing action would be a strategic mistake with significant consequences” .

DO NOT MISS :
Meghan and Harry copy royals to overhaul ‘divisive’ image [ANALYSIS]
Light at end of tunnel as Europe’s largest Omicron outbreak is LIGHT [REPORT]
Lilibet’s first Christmas will be very different from Archie’s [INSIGHT]

However, Russian officials have denied that the country is considering an invasion of Ukraine.

The head of the Russian armed forces, Valery Gerasimov, asserted that “the information circulating in the media about the alleged imminent Russian invasion of Ukraine is a lie”.

The country’s ambassador to the United Nations said last month that Moscow “never planned, never did and never will unless we are provoked by Ukraine or someone from it. ‘other”.

Eight people with links to the mercenaries have been affected by the sanctions, including founder Dmitry Utkin, a former Russian special forces commander decorated by President Putin.

In a statement, the EU said: “The Wagner Group has recruited, trained and sent private military operatives to conflict zones around the world to fuel violence, plunder natural resources and intimidate civilians in violation of international law , including international human rights law. “