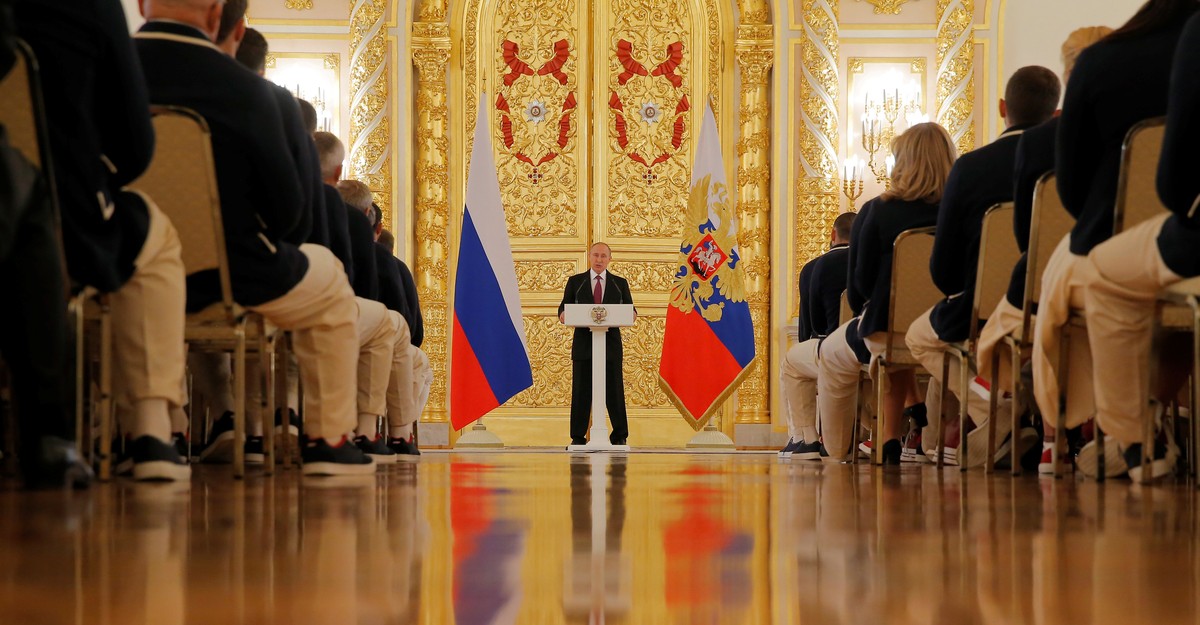 Putin likes to pretend that the Russian Revolution never happened

Just over 100 years ago, Russian Emperor Nicholas II abdicated his throne and his vast empire ceased to exist, sparking decades of world-shaking change. Yet this year not a single Russian TV channel celebrated the anniversary. The decision to ignore the centenary stemmed from a meeting in the Kremlin last year, where Russian President Vladimir Putin told his advisers there would be no point in commemorating it. Instead, the occasion should be discussed “only by experts”, he reportedly said. That is to say that the experts, the historians, discuss the Revolution; the rest of Russia should not concern itself with such matters.

This order was then passed on by Sergei Kirienko, the Kremlin’s new political strategist, to the directors of Russian state media companies. Russia doesn’t need revolutions, it needs stability, he said, according to those who attended those meetings. The collapse of the empire had become taboo for the Russian media, and apparently a negligible historical footnote for Putin.

Putin, however, is no Soviet Union groupie, despite his 2006 statement that “the collapse of the USSR [was] the greatest geopolitical catastrophe of the 20th century. Left-wing ideologies are alien to it. Since becoming president in 2000, he has filled the government with neoliberal adherents and ardent free-marketers, not neo-communists and admirers of the command economy. What Putin aspires to, above all else, are the days of Russia’s expansive greatness.

The idea of ​​the Russian empire therefore comes naturally to Putin. But his version of the empire is not an exact replica of that of Nicholas II. Instead, it’s an imaginary virtual empire, encompassing traits of the Soviet Union, Russian Orthodox Christianity, sovereignty, populism, Joseph Stalin, victory in World War II, the journey of Yuri Gagarin in space and palaces of Catherine the Great. Putin’s ideology is built on an inherent sense of grandeur in Russia, the idea that it is a country to be feared and respected. A world in which CNN broadcasts a documentary about Putin called “The most powerful man in the world” is his best world.

The conventional wisdom is that during Putin’s first term, the Russian people traded their political freedom for a sense of security and prosperity. In the 2000s, thanks to high oil prices, many Russians were better off than ever. But that has since changed. Russians are now willing to give up some of their prosperity in exchange for a sense of national pride, willing to suffer the sting of sanctions or economic crisis as long as Crimea remains part of Russia. Most Russians have not felt proud of their country since the collapse of the Soviet Union in 1991. Due to the economic turmoil that followed, many of them felt humiliated.

Now, for many, Putin has restored a sense of pride. It’s like how you feel when your favorite football team wins. Nothing really changes: you don’t get smarter, healthier or richer; your personal life does not improve. You simply, irrationally, feel happier, prouder of an accomplishment in which you played no part. For millions of Russians, Putin is that football team. And all he does is win.

Russia’s past glories are far more important than another unprecedented victory, fueling the Russian propaganda machine. As oil prices have fallen to historic lows, Russian history has replaced the bounty of the boom years as the eternal spring of Putin’s popularity.

Seen in this light, 1917 is the most uncomfortable year possible for Russian propaganda. In the story of the fall of the Russian Empire, there is no character that Putin can identify with. Not Stalin, the man who led his compatriots to victory in the war (he never compared himself personally to Stalin), nor Nicholas II, that loser who abandoned an empire. Nor can he identify with Vladimir Lenin, the revolutionary who destroyed an empire. (Putin makes no secret of his antipathy for Lenin, referring to him as the man who planted a ticking atomic bomb under Russia.)

And Putin certainly cannot compare to the democratic revolutionaries who ruled the country from February to October 1917. Thanks to their efforts, Russia became, for a short time, the most progressive country in the world, the first nation of Europe to abolish the death penalty, and one of the first to introduce universal suffrage, including for women.

During these months, the strong and free Russian civil society tried to take the destiny of the country into its own hands, inspired by artists such as Wassily Kandinsky, composer Igor Stravinsky, director Constantin Stanislavsky, founder of the Russian Ballet Sergei Diaghiliev, and writers and poets like Mikhail Bulgakov and Anna Akhmatova. Indeed, Russia’s first democratic prime minister, Georgy Lvov, was a friend and disciple of Leo Tolstoy, and attempted to implement a utopian ideal to create a nonviolent state. He resigned in July 1917 after the Bolsheviks’ first violent coup attempt, saying he could not bring himself to use arms to put down an uprising. His replacement, Alexander Kerensky, was a charismatic leader of the February Revolution, perhaps capable of becoming a soft dictator or a Russian Ataturk. But he too wanted to follow a western and democratic path. And in the end he was ousted by Lenin, a far more brutal dictator.

But for contemporary Russian ideology, neither a great culture nor a powerful civil society are important. What is important, on the contrary, is a victorious Russian Empire. Anything that doesn’t fit this picture can be discarded.

Incidentally, Russia 100 years ago was awash with these similar conspiracy theories.

There is, however, an aspect of contemporary Russian propaganda reminiscent of the Revolutions of 1917. According to Russian state television, the Russian opposition is made up of NGO and Western security service operatives. Any revolution is always the result of a conspiracy or foreign interference, it seems. The official Russian conspiracy theory – hammered home daily by Russian television and believed by Putin – tells us that the 2014 Ukrainian revolution was organized and paid for by the Americans, along with the Arab Spring revolutions.

Now we see the same types of theories popping up in state media representations of the Revolutions of 1917. The February Revolution, which brought down Nicholas II, is now said to have been sponsored by the British (thanks to the efforts of the very active British Ambassador to Russia, George Buchanan). The October Revolution, which brought the Bolsheviks to power, was said to have been financed by the Germans, who helped Lenin get to Russia and badly needed his help to end World War I.

Incidentally, Russia 100 years ago was awash with similar conspiracy theories. In 1917, the Russian tsarist state viewed all members of the opposition as traitors who had sold their souls to the British, while the liberal opposition believed that the government was crawling with German spies. Today it is accepted that there were no conspiracies, neither British nor German, shaping the events of 1917. Lenin was not a spy, although the authorities in Berlin allowed him, as well as ‘to his Bolsheviks, to cross Germany during the war on the way home. in Russia, where they hoped to end the revolution (and hopefully get Russia out of the war). An enormous amount of energy has been expended fighting imaginary rather than real threats from the West. And when the chaos of the real revolution descended, everything collapsed. There was no longer anyone to defend Nicholas II: All those who had been loyal to him before his abdication had disappeared.

The Russian government today does not fear a revolution. Even recent anti-corruption protests in several Russian cities still fail to impress the Kremlin. These protesters were young hipsters, they are sure, and the vast majority of Russians will remain absolutely loyal. The Kremlin is certain that everything is stable, that the people are proud of their president and that there is nothing to worry about. And they are right. But in his time, the Russian Empire seemed even more stable. Everyone knew what would happen to the Empire of Nicholas II: it would be ruled by his son, Alexei. Russian stability today is much less predictable.

This article was translated from Russian by Julia Ioffe.