VLADIMIR Putin is terrified of being killed like Libyan tyrant Gaddafi in a revolution as protests sweep across Russia over Alexi Navalny’s imprisonment, a prominent expert said.

Putin’s enemy Yuri Felshtinsky told Sun Online that the ongoing unrest convinced the Kremlin strongman that more crackdown and killings of opponents were needed to avoid the same gruesome fate as the Libyan leader .

Putin faces one of the biggest challenges of his 20-year reign as thousands of supporters of jailed opposition figurehead Navalny take to the streets.

The 68-year-old, who has maintained an iron grip on Russia for twenty years, has signed laws allowing him to remain in power until at least 2036.

Felshtinsky told Sun Online that Putin would feel he needs to step up brutality to quell dissent and protect his position.

It has been reported that the Russian leader “obsessively watched” videos of Colonel Gaddafi brutally murdered after being cornered by a mob in 2011.

Felshtinsky agrees that Putin is terrified that if he ever loosens his grip, a similar bitter end will await him.

“He’s smart enough to know that under normal rules his system of government cannot exist. He is not an idealist.

“He knows there is no way to survive if he doesn’t continue to oppress.

Navalny, 44, was arrested after returning from Germany, where he was recovering from poisoning with the deadly nerve agent Novichock in a widely suspected Kremlin assassination attempt.

What happened to Gaddafi? 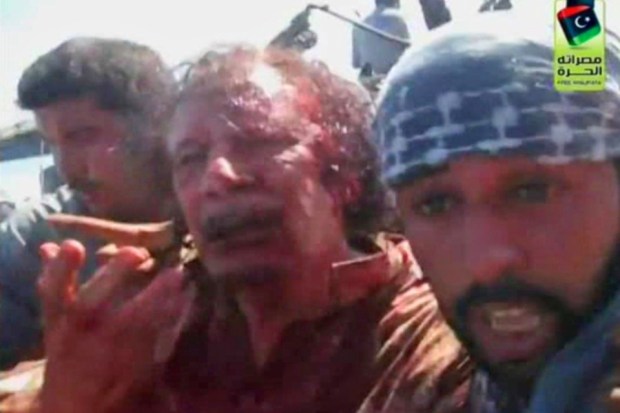 COLONEL Gaddafi’s brutal regime ended on October 20, 2011, when it was cornered by a revolutionary mob.

He was killed in a frenzied rebel execution after he was found crouched in a storm sewer in Sirte, Libya.

A chilling video captured the tyrant’s final moments as he was seen covered in blood among a crowd of fighters chanting “God is great.”

The dictator – who has committed war crimes and brutally oppressed his people – can be heard pleading for mercy in the clips, saying “what you are doing is wrong”.

” ” What’s the matter ? What is going on ? What do you want ? Pleaded the bloodied tyrant.

Taunts from “your dog” and cheers of “victory” can be heard as the stunned dictator is captured by the crowd.

He was reportedly beaten and tortured by the rebels, including with a knife or bayonet inserted into the anus.

Gaddafi was then shot at close range, with some reports indicating that he was executed with his own custom-made gold pistol.

His body was displayed to the public inside a freezer so that the people could have proof that the dastardly ruler was dead.

Felshtinsky is a well-respected Russian-American writer and historian and the author of The Age of Assassins: Putin’s Poisonous War on Democracy in Russia.

He helped Russian dissident Alexander Litvinenko escape to the UK where he was later assassinated by Kremlin assassins.

It gave him first-hand experience of how Putin ruthlessly treats those who dare to cross him.

Felshtinsky believes a similar fate awaits Navalny, who has now been imprisoned for three years in a penal colony.

Before being jailed, Navalny released an explosive video revealing a secret palace built by Putin at a cost of £ 1 billion, which has now been viewed 100 million times. 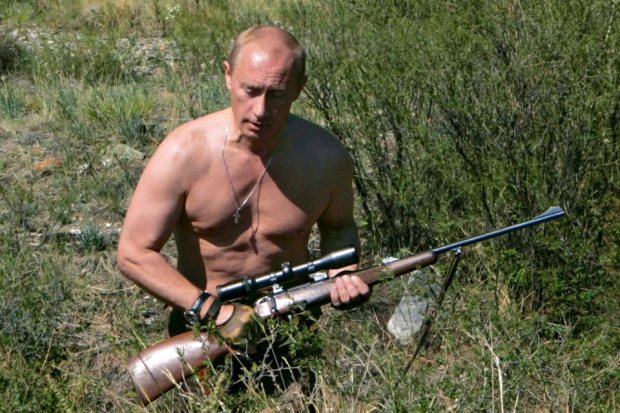 The Russian president was born in St. Petersburg in 1952 and joined the dreaded Soviet secret service of the KGB, serving in East Germany during the fall of the Berlin Wall.

He came to power promising order after the corruption and chaos of his predecessor Boris Yeltsin.

Since then, the Judo Black Belt has carefully cultivated an image of a tough man and enjoys being photographed topless carrying a gun.

While in power, he ruthlessly suppressed any opposition to his regime and also took Crimea from Ukraine.

Last year he signed a law that could see him stay in power until 2036.

He has been brazen in eliminating anyone who comes under his regime by poisoning the preferred means of killing.

Putin has also amassed enormous wealth and is said to live like a king with an extraordinary fortune of £ 160 billion.

Since he separated from his wife in 2014, a number of “secret girlfriends” have been reported.

Svetlana Krivonogikh – believed to be the mother of her beloved child – is a housekeeper turned millionaire who owns a popular nightclub.

His current girlfriend is believed to be 37-year-old trained gymnast and Olympic gold medalist Alina Kabaeva, who has leaked documents saying he paid £ 7.78million.

The couple are said to have twins.

Pictures showed the garish interior, including a purple velvet-lined boudoir with a stripper stick for the entertainment of Putin and his pals.

He also claimed that the Russian leader – whom he calls the richest man in the world – uses a “slush fund” to cover the expenses of his extended family.

Felshtinsky believes the video could have sealed the fate of Putin’s enemy.

“They know they made a big mistake in not having killed him,” he said,

“What has happened since shows Putin that the decision to kill him was the right one.

“He is the only person in Russia who is capable of organizing this kind of protest and an indication that he must be shot. They will kill him.

He says former KGB officer Putin came to power with the support of the current Russian FSB secret service, so he’s unlikely to face a challenge in the near future.

“In other countries parties are fighting for political power, but not in Russia because the FSB is above the parties and is the only power,” he said.

“Putin did not become a dictator because he was smart or charismatic, but because the whole structure of the FSB is behind him.

“Even if Putin dies tomorrow and nothing will change drastically. “

But for the moment, Putin “likes” to be in power and “does not seek retirement”.

“There is no one competing against him and there is no armed movement trying to overthrow him,” Felshtinsky said.

Putin’s enemy Alexei Navalny sentenced to three and a half years in prison for leaving Russia after Novichock attack
2021-02-04
Previous Post: Russia. Population declines for the first time in 15 years | New
Next Post: The Russian Revolution of 1917 and the Uprising Against the US Congress | News, Sports, Jobs