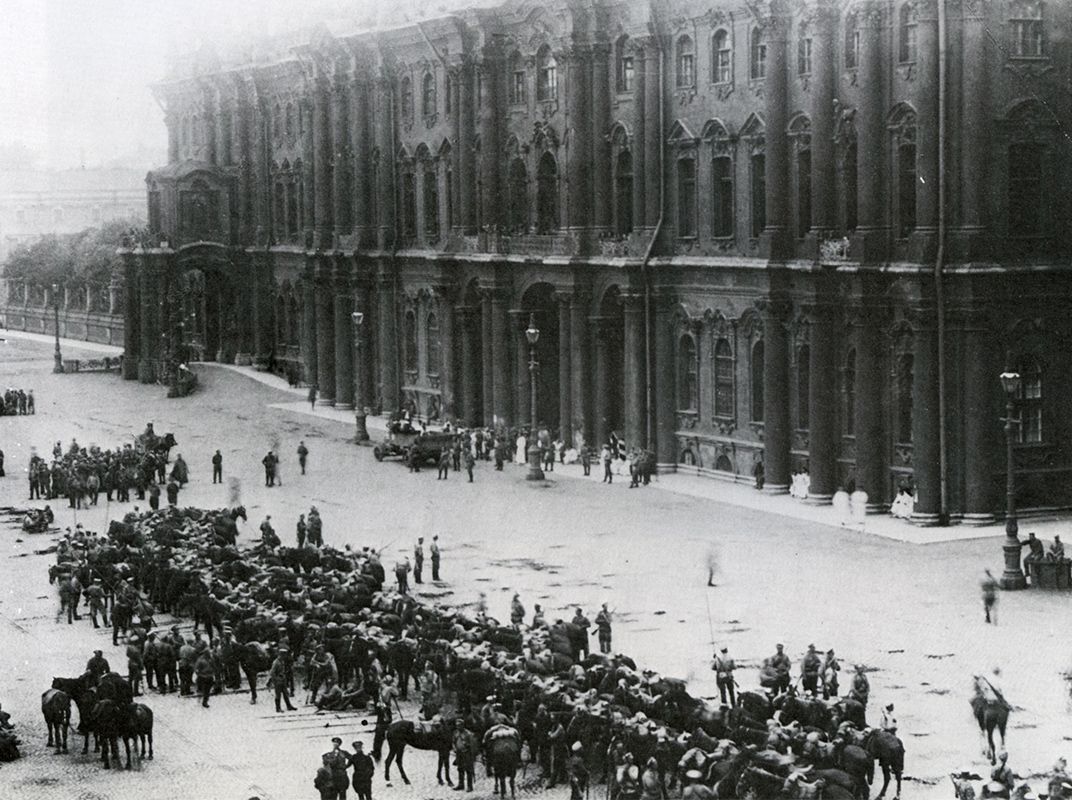 On the eve of the Russian Revolution, a palace coup seemed inevitable, but where would it come from? | Story

“The revolutionary must penetrate everywhere, into all strata, upper and middle, into the merchant’s shop, into the church, into the mansion, into the bureaucratic, military and literary worlds, into the third section [the Czar’s secret police], and even in the Winter Palace. – Sergei Nechaev, Catechism of a Revolutionary

During the 300 years that the Romanov dynasty held power in Russia, palace coups that replaced a monarch with a relative were the most common means of effecting political change. In the 18th century, a series of tsars leveraged military support to help them depose the reigning ruler; Catherine the Great, in perhaps the most famous palace coup, overthrew her own husband, Peter III in 1762. Her son, Paul, was murdered by disgruntled courtiers in 1801 after being dethroned with the knowledge, if not the complicity of his son and successor, Alexander I.

So it was with this long and bloody history that January 1917 raised fears of another Romanov palace coup, with Nicholas II at the center of it all. The assassination of Rasputin, a close adviser to the Tsar, by the hands of his nephew and cousin announces the political chaos to come. The conspirators hoped Rasputin’s removal would cause Nicholas to turn to relatives and other members of Russia’s political elite for advice.

Instead, it deepened the rift between Nicholas and his extended family. The Tsar was disgusted by the involvement of his relatives in the murder and exiled both of them from Saint Petersburg. January 11 [December 29 in the calendar in use in Russia at the time], the Tsar received a letter signed by 16 of his relatives imploring him to rescind his order to send Dmitri, his cousin, to the Persian front, where Russian troops were fighting the Ottoman Empire during World War I. Nicholas returned the letter with the handwritten note, “No one has the right to commit murder; I know that many are troubled by their conscience, and that Dmitri Pavlovich is not the only one implicated in this affair. I am surprised by your request.

Other members of Nicholas’ family declined to comment on Rasputin’s murder but implored the Tsar to rule more effectively. The demands of the Russian elite were conservative: the appointment of ministers who would have the support of the Duma, the representative assembly granted by the Tsar in 1905, the Tsar residing in the capital, Saint Petersburg, rather than at headquarters military of Mogliev, where he had spent most of his time after assuming personal command of the Russian army in 1915, and the unpopular Empress Alexandra to be prevented from further influencing the affairs of state.

The Tsar’s reluctance to engage in even these modest reforms led to much speculation of a coup. After a particularly frustrating audience with the Tsar, Nicholas’ cousin and brother-in-law wrote to his brother, a historian who also happened to be one of the signatories of the letter demanding clemency for Dmitri: “Either we sit down arms crossed and wait for Russia’s humiliation or take heroic action… people who love Russia find themselves at a crossroads and wondering how to act; for the first time in our lives, we must ask ourselves how far we are bound by the oath taken. In short, it’s a nightmare from which I see no escape.

Prominent politicians and diplomats have heard rumors of a planned “Grand Dukes’ uprising”. There was speculation that Nicholas would be replaced by one of his relatives as ruler or as regent for Nicholas and Alexandra’s 12-year-old haemophiliac son, Alexei.

It was unclear, however, which member of the imperial family would be willing to lead a palace coup. Efforts to involve the Duma failed. When the Tsar’s aunt declared during a lunch with the President of the Duma that the Empress “must be annihilated”, the latter replied: “Allow me to treat this conversation as if it had never taken place. reminding him that his oath of allegiance required him to report the comments to the Tsar.

Russia’s World War I allies, Britain and France, were alarmed by the political unrest on the Eastern Front. January 13 [New Year’s Eve in the Russian Calendar], British Ambassador George Buchanan met with Nicholas and encouraged him to appoint a prime minister who would have the support of the Duma and the nation as a whole. Nicholas replied: “Do you mean that I am I to regain the trust of my people or that they must regain my confidence.” French Ambassador Maurice Paléologue drew parallels with the situation of Louis XVI and Marie Antoinette on the eve of the French Revolution. Both diplomats agreed that Nicolas seemed unaware of how precarious his authority had become.

The worries of the Russian elite were overshadowed, however, by simmering discontent among workers in St. Petersburg and Moscow, who wanted an immediate solution to shortages of bread and fuel during the particularly cold winter of 1916-1917. What would eventually become a full-fledged workers’ insurrection had its roots in popular revolutionary movements that Nicholas II’s grandfather, Alexander II, had dealt with since he abolished serfdom in 1861. (He had consulted a Abraham Lincoln’s pre-emancipation proclamation.) For a generation of young workers and students, however, the reforms were seen as too little, too late, and calls for violent revolution followed.

These early populist movements were particularly influenced by well-known Russian authors. Sergei Nechaev’s manifesto of 1869, Catechism of a Revolutionarycaptured the attention of generations of radicals with his call for total commitment to the cause of revolution and Ivan Turgenev’s 1862 novel, fathers and sonsexamined the differences between the older generation of reformers and a younger generation of revolutionaries.

For most Russians, the most significant manifestation of these new ideas was the assassination of the Tsar in 1881 when a bomb was thrown into his car by a member of the revolutionary political organization People’s Will. Nicholas II was 13 at the time as he stood by his grandfather’s deathbed. His father Alexander III’s subsequent detour from reform to a reactionary program of “orthodoxy, nationality and autocracy” left a strong impact on his ideology. His father’s repression did not put an end to revolutionary activity. Older People’s Will revolutionaries helped found the Socialist Revolutionary Party, of which the Bolsheviks emerged as a key faction in 1903.

The rise of these revolutionary movements occurred against a backdrop of increasing urbanization and industrialization in Russia. In 1905, two years later, more than 3,000 workers, frustrated by poor working conditions, marched to St. Petersburg’s Winter Palace to demand higher wages, safer factories and a day’s work. shorter. Nicholas, who had been in power for just over a decade, was not in residence, but his troops fired into the crowd, killing at least 132 people and injuring hundreds. The violence shattered the Tsar’s image as protector of his people and led to months of unrest that continued until the Tsar reluctantly agreed to establish the Duma.

Bloody Sunday, as the massacre was called, became a focal point for the cause of workers’ rights. In commemoration of the 12th anniversary of the event, as elite support for Nicholas II exploded, 145,000 Russians took to the streets, no longer seeking the Tsar to solve their problems. The strike displayed red flags and banners emblazoned with the words “Down with the Romanovs”.

For their part, the Bolsheviks, who were not yet a major political power, were pessimistic about all this revolutionary fervor translating into real political change, let alone a workers’ revolution. That same January, in a lecture to Swiss Socialists in Zurich, 46-year-old Vladimir Lenin said: “We of the older generation may not live to see the decisive battles of this revolution in to come. His close attachment to “revolutionary defeatism” was not shared by all his comrades.

The party leadership was deeply divided. There were fewer than 500 committed Bolsheviks in Russia at the start of 1917, including Joseph Stalin, who had been drafted into the army at the end of 1916. Bolshevik networks often consisted of a handful of revolutionaries.

The exiled Bolsheviks, notably Leon Trotsky, who arrived in New York on January 13, 1917, were focused on an international socialist revolution. Those based in Russia, who had often spent years in Siberia, favored a narrower focus on Russian concerns. Lenin wrote at the time that World War I was “a war between two great buccaneers for world domination and plunder” and hoped for Russia’s withdrawal from hostilities.

It was clear at that time, 100 years ago, that the Russian Empire had a cloudy and uncertain future. There was unrest among the working class and discontent among the ruling elite. Within weeks, the popular uprising known as the February Revolution would occur, ultimately leading to the collapse of three centuries of Romanov rule in Russia. The decisive battles of the coming revolution would take place much sooner than Lenin predicted.