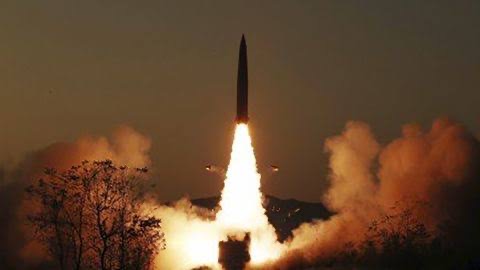 North Korea has denied having concluded arms deals with Russia, accusing the United States of tarnishing its image over the allegation.

The denial was contained in a statement issued Tuesday by the official KCNA news agency.

The Foreign Ministry in Pyongyang said Washington constantly spreads an unsubstantiated “arms smuggling rumor” between North Korea and Russia to make it a fait accompli at all costs.

The ministry accused the United States of trying to tarnish North Korea’s image on the international stage by invoking what it called “illegal” UN Security Council resolutions.

“We make it clear once again that we have never had an ‘arms trade’ with Russia and that we have no plans to do so in the future,” the statement continued.

The US government last week accused North Korea of ​​secretly supporting Russia with military hardware in its war against Ukraine.

Mr Kirby said the United States would continue to monitor whether the shipments were arriving.

North Korea had previously denied supplying arms and ammunition to Russia in September.

At the time, Mr. Kirby spoke of millions of rockets and artillery shells that Moscow could buy from Pyongyang. However, he pointed out that the United States had no proof of sales.

According to military experts, Russia has trade relations with the Asian autocracy, which is excluded from world trade.

He revealed the bottlenecks the Russian military was facing due to international sanctions imposed on Moscow due to the Russian invasion of Ukraine.

Largely isolated, North Korea has pledged its support to Russia since the conflict began in February, a move that has sparked widespread outrage in the West.

Pyongyang is under severe international sanctions because of its nuclear weapons program.