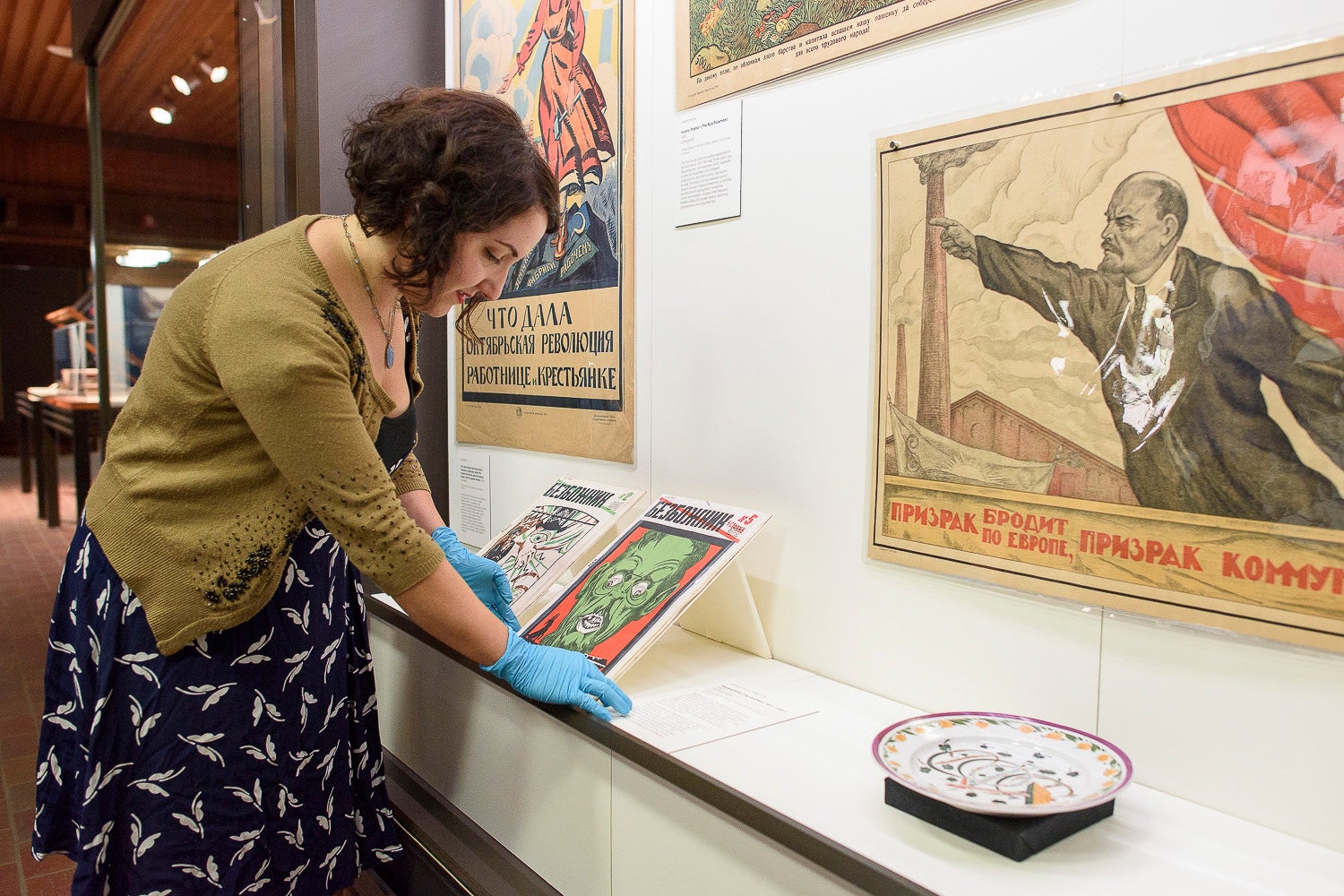 New exhibition marks the centenary of the Russian Revolution of 1917

Drafts of the letter of abdication from the last Russian tsar, painted portraits of Russian rulers of the 18th and 19th centuries, photographs of massive street protests in Petrograd and Moscow in 1917, and early-era propaganda posters Soviet – these are just a few of the artifacts on display at Hoover Institution Library and Archives and the Cantor Arts Center as part of a new exhibition marking the centenary of the Russian Revolution of 1917.

The Hoover Institution Library and Archives partnered with the Cantor Center for the Arts to create the Special Joint Exhibition on the End of Imperial Russia and the Beginning of Soviet Russia.

The Crown under the hammer: Russia, Romanov, Revolution, which runs through March 4, highlights Hoover’s rich collections of works of art, archival documents, photographs and rare books related to the end of Imperial Russia and the beginning of the Soviet Russia. The Hoover Institution Library & Archives has partnered with the Cantor Arts Center to create the special joint exhibit.

The year 1917 saw the fall of the Romanov dynasty, which had ruled Russia since 1613, and the seizure of power by the Bolshevik Party (later called the Communist Party). Under the leadership of Vladimir Lenin, the new Soviet government fought its rivals in a bloody civil war, which was followed by a catastrophic famine that left millions dead.

What happened next in Russia affected the rest of the world, politically and culturally, said Bertrand M. Patenaude, researcher at the Hoover Institution and specialist in Russian history who was co-curator of the exhibition.

“The Russian Revolution has triggered tremors all over the world,” he said. “What we get after is something new under the sun – a Marxist-Leninist regime that really wants to overthrow the world. The idea is not simply to stop with Russia but to spread the revolution across Europe and then into the world.

The Hoover Library & Archives began as a collection point for documents relating to World War I and what led to it. In the early 1920s, Stanford historian and Hoover curator Frank Golder spent nearly two years in Soviet Russia collecting documents related to the Russian Revolution.

As a result of this effort and the constant collection of additional material over the next century, the Hoover Institution Library and Archives now houses a unique treasure trove of documents relating to the end of Imperial history and the beginning of the history of Soviet Russia, Patenaude said.

“Hoover’s modern Russian library and archival collections are truly unmatched outside of Russia,” he said. “What probably attracts most researchers to the Hoover Archives are its Russian and East European collections. “

To create an exhibit appropriate to the Revolution’s centenary, organizers sifted through materials from dozens of Hoover collections. The crown under the hammer features some rare archival gems, such as the Abdication Drafts. Several oil paintings by Russian masters are exhibited to the public for the first time, as part of the Cantor exhibition.

Inside a Cantor’s gallery, unique and rare paintings made to established academic standards hang on the wall opposite revolutionary and mass-produced posters from the early Soviet era. The juxtaposition underlines the radical change in cultural and artistic priorities triggered by the Revolution.

“It is impossible for me to look at the first Soviet posters and other works supported by the new state and not focus on the aesthetic and thematic innovations that would become the hallmark of the 20e– Century modernism, ”said Jodi Roberts, Robert M. and Ruth L. Halperin curator for modern and contemporary art at Cantor and co-curator of the exhibition. “So many of the approaches to artistic creation that we examine today and which we call modern have their roots in the Russian Revolution.”

The Crown under the hammer: Russia, Romanov, Revolution

The Cantor exhibition is free to the public and open from 11 a.m. to 5 p.m., Wednesday to Monday. On Thursday, the Cantor is open until 8 p.m. It is closed on Tuesday.

The Hoover Exhibition Pavilion is open Tuesday to Saturday, 11 a.m. to 4 p.m. The pavilion is closed on Sundays and Mondays. The exhibition is free and open to the public.

Roberts said the abundance of material related to Hoover’s Russia and the collaboration between the Hoover and Cantor made possible a particularly vivid presentation of this striking cultural and artistic shift.

“Exhibits on the Russian Revolution tend to focus on one side or the other – the Romanovs or the Soviets,” Roberts said. “So it’s really remarkable to have this wealth of information and objects that represent both sides of the revolution. “

The two halves of this exhibition, at the Hoover and the Cantor, offer visitors the opportunity to experience the Revolution in an impossible way through books and other after-the-fact analyzes of the event and its aftermath.

“There is a difference between understanding historical events through primary source art and documents versus secondary sources,” said Roberts. “These primary materials immerse you in the time and space of historical events in a visceral and immediate way.”