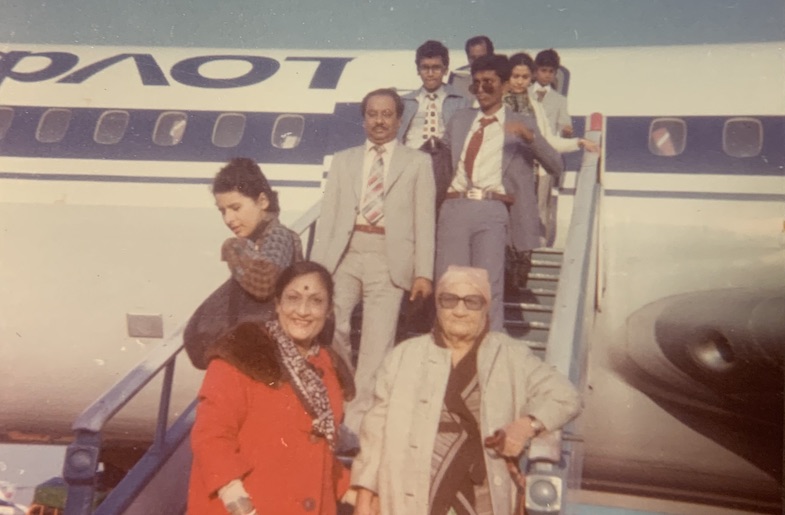 I was born and raised in the early 1960s in the sleepy delta town of Cuttack in Odisha (formerly Orissa) between a confluence of three rivers. Few people had heard of our city let alone the Mahanadi, Kuakhai or Kathojori rivers. I remember coming back from boarding school on the train and being asked, “Where is Orissa?”

Get stories from India Currents straight to your inbox.

The world may not know who we were, but we knew the world! The world and its wars were an integral part of our Indian home because of my grandmother, who was European and had lost her family to the genocide.

the Saifo or Seyfo, also known as the Assyrian Genocide, began in 1914. It was the mass slaughter and deportation of Syriac Christians in the Persian province of Azerbaijan, committed by the Ottomans and Kurds. Born in Urmia, in the West Azerbaijan province of present-day Iran, my grandmother was nine or ten years old when the genocide began.

Fleeing to safety, they ended up in Tbilisi, Russia. An already fragmented family, they suffered even more loss when their mother died giving birth to their brother. The baby also died. The family persisted, now with only the father, two daughters and a son. My grandmother, Susember “Susan” Rasho, was the middle child.

Tbilisi is where they might have stayed had it not been for the Russian Revolution of 1917. Without further protection from the Soviet soldiers, who were now being dragged into their own revolution, my grandmother and her family were again targeted by persecutions. World War I had also begun in 1914, and the world was raging with unrest in all directions. Once again, with no homeland and no place of their own, my grandmother and what remained of her family began their journey outside of Russia.

The British were front and center in the war. Red Cross camps had been set up in and around Baghdad. The British rounded up people who found themselves homeless and persecuted because of their religion, and helped them get to the camps and get to safety. The Rashos, along with thousands of other Assyrians, began planning their journey.

I still remember my grandmother’s stories, her lips trembling as she spoke of the snow, the heat, the horses, the hunger, the thirst and the deaths along that mountain road. One hundred and five years ago there were no roads – no easy way to travel. She never knew how long it took them to reach the camps outside Baghdad. “It could have taken months,” she said.

While they were still living in Tbilisi, her older sister Rapka, fourteen years old and of marriageable age, was sent to Donetsk in Ukraine. Friends there were tasked with finding her a groom.

The decision to leave Tbilisi for safer lands was sudden and the family had no time to wait for Rapka to return from Donetsk. This was the last time the two sisters saw each other until 1980.

Father, daughter and son began their arduous journey from Russia to Baghdad. Tragedy struck again when their father was shot from behind and killed. My teenage grandmother was now the sole guardian of her eleven-year-old brother Nicholas.

On the other side of the world, a young Indian soldier in the British army, Edward Benjamin Samuel (my grandfather), was also heading to Baghdad to fight for the British.

My grandmother and her brother found refuge in a camp that housed Assyrian and Armenian refugees. A year after their stay at the camp, Nicolas disappeared.

As part of the YMCA, my grandfather was assigned to lead a prayer meeting in the camps. There he met my grandmother. At the time, she only spoke Aramaic and maybe a little broken English. My grandfather spoke Oriya, Bengali, Hindi and English. The two fell in love with sign language and were married at the Red Cross camp in 1922. She traveled to India with her new husband a few months later, again unsure where she was going, not knowing the language, just go, because she had no options. As a romantic, I hope it was because she loved my grandfather!

Eventually, my grandmother learned to speak Oriya, Bengali, Hindi and English. Unfortunately, as she gained proficiency in these languages, she began to forget Aramaic. We think this could be in response to his multiple traumas; to survive, she had learned to disassociate herself from anything Assyrian.

In 1978-1979, an aunt who lived in Germany (my grandparents had seven children together), with the help of the Red Cross, found my grandmother’s two surviving siblings.

Rapka was still living in Donetsk, Ukraine, and now had thirteen children, and Nicholas was married and settled in Baghdad, Iraq.

Her first time on a plane, in the late 70s, my grandmother was heading to an area she had called home for the first decade of her life. She would go home with people who looked like her, dressed like her, and spoke like her. I will never forget her face when she boarded that flight. Unfortunately, Aramaic was lost for my grandmother and she was once again forced to communicate with a loved one via sign language.

Earlier, in 1977, Nicholas and his wife Azadoui flew to India and had a moving reunion with my grandmother. Azo knew a little English and she was able to help the siblings communicate.

I always wondered why this European woman chose to stay and earn her living in a small river town in India. My answer came to me while I was writing and researching for this article. Assyria, his homeland, was once an ancient empire, commonly referred to as the Mesopotamian Empire, from the Greek word “Mesopotamos,” which means in the middle of the rivers. The three rivers, the Tigris, the Euphrates and the Great Zab! Cuttack’s three rivers must have soothed her, embraced her, and I’m sure reminded her of the home she was forced to leave.

One hundred years have passed since my grandmother and her family fled war, destruction, tried to find peace, tried to survive. A hundred years later, it seems that nothing has changed.

Shabnam Samuel, award-winning memoir author, A fractured liferuns the Washington, D.C.-based company Social Lite House, LLC, which works with those most in need. She is also the founder of the Panchgani Writers Retreat, an international writing retreat based in Panchgani, India. Shabnam teaches writing through corporate creative workshops. She also hosts a local TV show called Dew drops and words which broadcasts to 6.1 million viewers on the WJAL LATV network in the Washington, DC area. To learn more about Shabnam, click on here.

This article was edited by the Contributing Editor Rasana Atreya.

2022-02-28
Previous Post: My grandmother fled an Assyrian genocide, a Russian revolution and married my Indian grandfather
Next Post: Russia’s war is rational, NATO is screwed. Do with