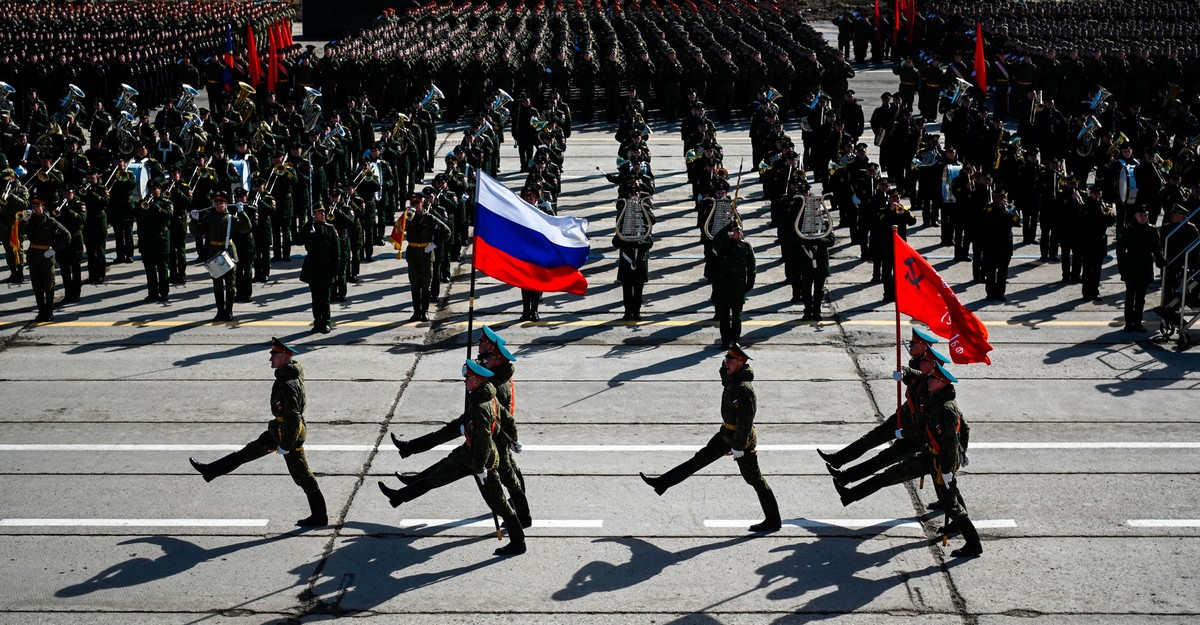 May 9 could be a turning point in the Russian war

In the West, May 9 usually passes without notice. In Russia, however, it marks the surrender of Nazi Germany and the end of World War II in Europe. Russia’s Victory Day is a time for military parades and solemn commemorations, much like the United States integrating Veterans Day and Memorial Day into one gigantic military and patriotic celebration. And even that would not capture what VE Day means to Russians and Kremlin authorities; the United States, after all, did not have the near-death experience of losing 27 million people.

It is also a day for speeches, and Russian President Vladimir Putin intends to deliver one. During the Cold War, Sovietologists paid attention to such public statements, looking for clues about Kremlin policy. In recent decades, this kind of analysis has fallen by the wayside: going to Putin’s meetings in Valdai and asking him questions directly was easier than trying to analyze his public statements.

This year, however, the world will listen more carefully to Putin’s speech. Russia is once again in a major war in Europe, this time as an aggressor, as Putin goes on a mad crusade to establish some sort of Christian Slavic Empire to replace the Soviet Union. On May 9, Putin is likely to provide a clue as to whether he intends to end this crusade or expand it into a planet-threatening war.

British Defense Minister Ben Wallace, for his part, expressed concern that Putin could use May 9 to push for a massive mobilization of the Russian people. This would imply not only an extension of the war against Ukraine, but also an escalation against the United States and NATO. For more than two months, Putin and his various minions in the Kremlin and in the Russian press have railed against the Nazis and threats to the existence of Russia, and as Wallace noted, it would not be surprising to see Putin expand his campaign against the putative Nazis in Ukraine to a war against all “Nazis of the world”.

Peter Pomerantsev: ‘We can only be enemies’

So far the Pentagon and US intelligence have made no official comment, but Russia watchers fear Putin wants to help his military avenge the humiliation of its appalling performance in a war where every advantage , including size and geography, initially seemed to be on the side of the Russians. Instead of a lightning victory and a march to Kyiv, the Russians (even by conservative estimates) lost over 10,000 men, including a slew of generals and other senior officers, as well as hundreds of tanks and dozens of planes. Their flagship in theater, the Moscownow lies at the bottom of the Black Sea.

Someone must be held responsible for this disaster, and we can be sure that it will not be Vladimir Putin.

Putin will blame the West for his troubles, and he will almost certainly issue threats, including more nuclear slashes. There may well be a call to action for the Russian people. But how much additional capability the Russians can bring to the war is unclear, especially if mobilization requires a significant conscription effort.

Russian military life is a miserable existence, overseen by brutal and indifferent officers, and characterized by the bullying of young soldiers, low pay and poor living conditions. For decades, dodging drafts was rampant, and understandably so. Reforms over the past decade, including shorter terms of service, cracking down on traditions of hazing and intimidation, and granting conscripts a little more freedom, have succeeded in alleviating these problems. If Putin calls for mobilization, these problems will return and it will take months or even years of training before these new troops are combat ready. Meanwhile, mass conscription risks angering a Russian public that has so far been – from a safe distance – largely supportive of the war.

Likewise, the Russian defense industry cannot instantly shift into high gear and solve Moscow’s equipment problems. Even if years of corruption and waste could be overcome with a “Do the plan!” Soviet-style. effort, what would be the point? To send more poorly designed tanks and defective missiles to the front? It would also be a tough sell at home; the soviet people got used to living in misery as money was diverted to the defense sector, but it might be harder to keep today’s russians living with shortages and sanctions while Putin is spending his taxes to build more armor for the motherland.

Yet Putin could call for a last ditch effort to overwhelm Ukrainians by throwing men and machines into a meat grinder. This war was a deceptive scheme hatched in Putin’s isolated COVID bubble, and even now Putin seems truly unable to comprehend the disaster he unleashed on Ukraine and the damage it caused Russia. Advised by an inner circle of hawks – some of whom will fear blame if things continue to deteriorate – he may see doubling as a realistic option.

Such an intensification of the war effort would serve another purpose: it would impose a certain unity within a Kremlin where the accusations have already begun, and would increase social pressure to silence those in Russian society who might take the risk of talking, especially now that thousands of people have already been arrested and many Russians are fleeing the country. So far, Putin appears to accuse the security services of misleading him, but he has also railed against Russian citizens who he says prefer life in the West and are therefore disloyal to Russia. (It’s ironic, given how many of Putin’s confidants seem to share such a preference.) The Russian military, for its part, could welcome a militarized nation not only to regain its pride, but also to threaten young Russians who oppose war with forced military service.

The most worrying possibility is that Putin has decided that he will simply declare NATO as the real source of Russia’s defeat and plunge Russia into World War III – a real World War III, rather than the one the Ukrainians and others claim to be already underway. – with the Russians launching attacks on Western forces, perhaps on the Ukrainian border or at sea. This choice does not ask Putin to be a madman, but rather to be as uninformed and overconfident as he has been for years. (Putin, as one NATO official put it, “has unwavering faith in his ability to control events.”) In the face of defeat, he could stake Russia’s existence itself in a war. enlarged that Russia cannot win, betting that NATO will make peace before the Kremlin has no recourse but to cross the nuclear threshold.

Judging by the Russian media – which has gone from sensationalism to drowning in total hysteria – the idea of ​​Russia fighting NATO to an honorable draw is far more appealing than suffering continuous defeats at hands of the Ukrainians and their courageous President, Volodymyr Zelensky.

And apparently, if that means courting the risk of global annihilation, so be it.

Even if Putin chooses a less dangerous path, he is unlikely to declare some sort of Nixonian “peace with honor” exit. Here, Putin is at an impasse. The goal of hiring Defense Minister Sergei Shoigu a decade ago and pumping money into the Russian Armed Forces was to restore Russia as a formidable military power – or at least capable of winning wars against smaller opponents without a national convulsion. The war, however, has proven that these basic goals have not been achieved, and if Putin calls for a greater war effort, he will not just admit defeat in Ukraine, but concede that the reconstruction of the Russian army was a failure.

If Putin does not announce an escalation, what else could he say? One option is to declare a limited victory and then go back to crushing the Ukrainians, as he has done in eastern Ukraine since 2014. He can simply announce, in the spirit of a day dedicated to the end of Hitlerism, that he in effect “denazified” Ukraine, an easy call given that few Nazis were at large in Ukraine in the first place. He could say that victory is on the way but must be consolidated with the occupation of what is left of Mariupol.

No one can know what Putin will do next, and the opacity and unpredictability of Kremlin policy will become even more pronounced now that Putin has assumed personal control of the conduct of the war (while offloading the day-to-day work to govern Russia to Prime Minister Mikhail Mishustin). We should prepare for warmongering accusations against NATO and the West. Insane rhetoric emanating from the Kremlin was a part of life with the Cold War, and now that Putin has firmly committed Russia to a second Cold War, we should be measured and calm in our responses, just as we were when the leaders Soviets thundered at us from atop Lenin’s Tomb.

No matter what Putin says on May 9, the Russians will continue to inflict misery on the Ukrainian people. The question next week is whether the Russian president intends to extend this war to the rest of the planet.