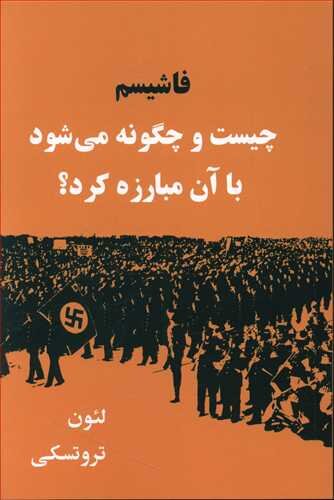 TEHRAN – The book by Bolshevik revolutionary and Marxist theorist Leon Trotsky “Fascism: what it is and how to fight it” has been published in Persian.

Mohammad Radmanesh is the translator of the book published by Talaye Porsoo Publications in Tehran.

The book explains why fascism was able to win only in countries where social democratic or Stalinist parties prevented workers and their allies from using a revolutionary situation to oust the capitalists from power.

Trotsky was one of the leaders of the Russian October Revolution, just behind Vladimir Lenin.

After leading a failed struggle of the Left Opposition against the politics and rise of Joseph Stalin in the 1920s and the growing role of the bureaucracy in the Soviet Union, Trotsky was expelled from the Communist Party and deported from the Soviet Union.

One of the earliest advocates of the Red Army’s intervention against European fascism, Trotsky also opposed Stalin’s peace accords with Adolf Hitler in the 1930s.

As leader of the Fourth International, Trotsky continued in exile to oppose the Stalinist bureaucracy in the Soviet Union and was eventually assassinated in Mexico by Ramón Mercader, a Soviet agent.

Trotsky’s ideas form the basis of Trotskyism, a term coined in 1905 by his opponents in order to separate it from Marxism.

Trotsky’s ideas remain a major school of Marxist thought that opposes the theories of Stalinism. He was one of the few Soviet political figures who were never rehabilitated by the Soviet administration.

Photo: Cover of the Persian translation of Leon Trotsky’s book “Fascism: what is it and how to fight it”.