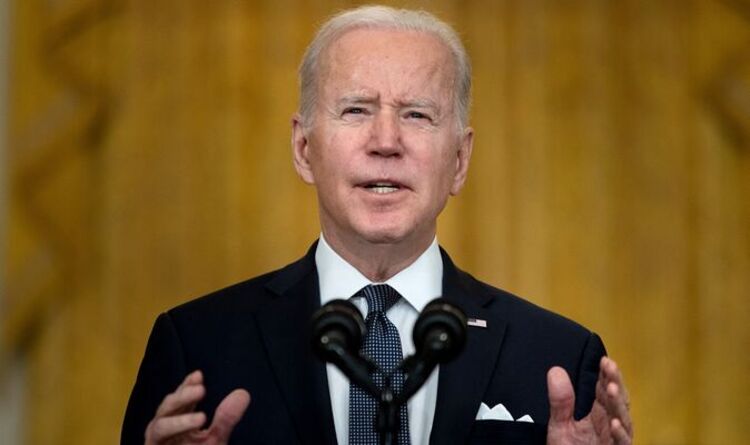 Earlier this week, Ukrainian President Volodymyr Zelensky made a desperate plea for the US president to visit Kyiv as tensions between Russia and Ukraine reach a fever pitch. Mr. Zelensky said in a statement to Mr. Biden: “I am convinced that your arrival in Kyiv in the coming days, which are crucial to destabilize the situation, will be a powerful signal and contribute to de-escalation.”

But at a press briefing, Mr Biden’s deputy press secretary, Karine Jean-Pierre, announced that a visit to Ukraine was not on the president’s agenda.

She said: “I have no travel plans to announce or preview at this time.

“We don’t have any trips to confirm at this time.

“This is what the president’s program looks like and it is certainly not a confirmation to go and visit Ukraine.”

Tensions between Moscow and Kiev have reached a boiling point in recent months.

In September, President Zelenskiy warned that all-out war with Russia could be a “possibility”.

Since 2014, more than 14,000 people have been killed in the conflict in eastern Ukraine.

This week, concerns about a war between Moscow and Kyiv were raised after Russian units left their staging areas.

US officials believe Russia could launch an invasion of Ukraine this week, although there remains hope that a diplomatic solution can be found.

Russia has surrounded Ukraine on three sides, with more than 100,000 soldiers massed on the border, but has always denied that an invasion is planned.

Dr Paul Flenley, a lecturer in politics at the University of Portsmouth and an expert on Russian foreign policy, told Express.co.uk the consequences of any invasion would be “enormous”.

He said: “I think the Russian population was not prepared for an invasion of Ukraine and its consequences.

“Psychologically, the consequences would be enormous.

“That wouldn’t sit well with all the rhetoric of Ukrainians being our brothers, and they should be part of a larger association.

“An invasion of Ukraine and the capture of Kiev would simply be a disaster for this whole Putin ideology.”

After World War II, the western part of Ukraine merged with the Ukrainian Soviet Socialist Republic, making the whole country part of the Soviet Union.

It regained its independence in 1991 with the collapse of the Soviet Union.

Many Russians, including Mr. Putin and other Kremlin figures, still see Ukraine as part of Russia.