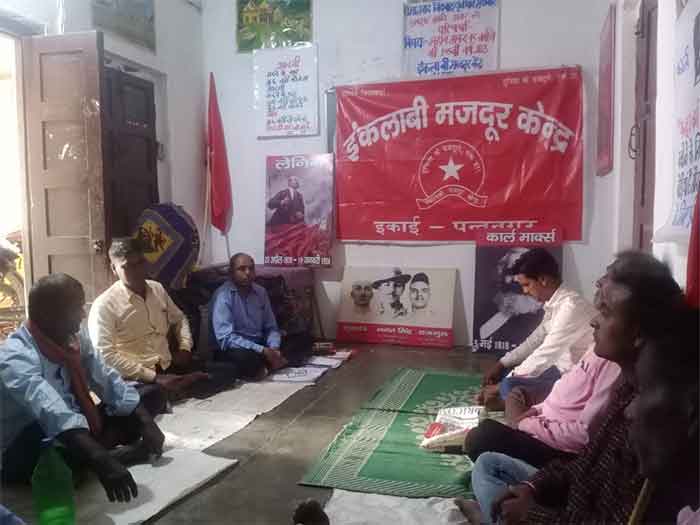 The Inquilabi Mazdoor Kendra and fraternal organizations conducted a series of programs in different parts of Uttar Pradesh, commemorating the 105e anniversary of the Russian revolution. In the most positive qualitative sense, by resuscitating the message of the Russian Revolution towards the liberation of working people. Tribute to the painstaking mass work carried out by the Inquilabi Mazdoor Kendra in recent times to politically educate the working class in organized and unorganized labor. He struck the striking relationship between the Russian Revolution and the Indian and world proletariat. It stood out from the revisionist tendencies within the communist movement and was to inspire the workers’ brothers everywhere.

At Domdar Swaroop Park in Bareali District, Inquilabi Mazdoor Kendra initiated a public meeting, jointly with the student organization Parivartankama Sanghatana and the Autorickshaw Welfare Association, The history of the Russian Revolution was summed up in detail, the methods of construction of socialism and the importance of the Russian revolution in today’s world. time. A demand was placed to scrap 44 labor laws and speakers revealed how historically labor has mastered economic oppression to plant the flag of the proletariat. It was told how capitalism engulfed the whole world to enslave the working class. The nature of the capitalist penetration offensive in relation to neo-fascism has been recounted. He resolved that labor stand up to illuminate the spirit of proletarian resistance to roll back the government.

At Ramnagar Degree college, a poster campaign was undertaken by Parivartankami Sanghatana, projecting the story of the Russian Revolution and its impact globally. Besides the victories, political books were also distributed. A very important response from the student community.

November 7e in Kashipur, in the Bengali settlement of the IGL factory, organized a meeting commemorating the Russian October Revolution and distributed leaflets. A poster campaign was also carried out on the historical importance and relevance of the October Revolution today, in our time. A protracted campaign was waged in the bastis propagating that the spirit of the Russian Revolution was to illuminate and pay homage to all martyrs forever.

In Patanagar, contract workers Kalyan Samiti organized a meeting on the 105e anniversary of the Russian Revolution. It summarized in detail the revolutionary achievements of the Russian and Chinese revolutions, in all fields. The subject of the ferocity of the contract labor system has been widely brought to light. It was summarized how the capitalist offensive was engulfing the entire world to divide the working class and crush its struggles. The 44 labor laws were condemned, which totally subjected the workers to the mercy of the industrialists. Speakers explained how unemployment, rising prices, shrinking workforce, etc. had reached unprecedented heights. the illustrated resemblance to How Education Became Unaffordable was highlighted. Speakers talked about how women were still in bondage. The resistance of Russian workers to imperialist war plans has been covered. The meeting pointed out that even 75 years after independence, there had not been a radical transformation in the life of the working class. It was pointed out that, importantly, colonial practices did not perish under the Modi regime. Production methods were in contrast to socialist Russia.

thakor hard is a freelance journalist who has covered mass movements across India.