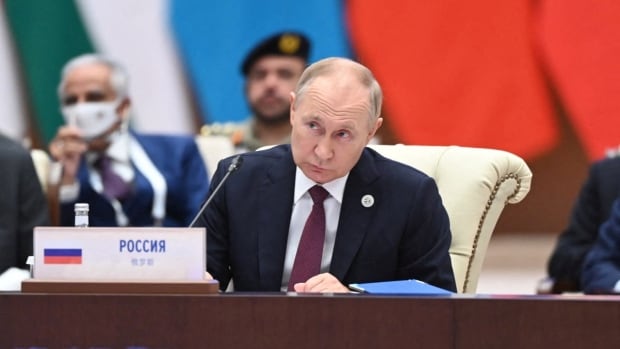 Indian Prime Minister Narendra Modi told Russian President Vladimir Putin on Friday that now was not the time for war, directly attacking the Kremlin leader in public over the nearly seven-month-long conflict in Ukraine.

Locked in a confrontation with the West over the war, Putin has repeatedly said that Russia is not isolated because it can look east at major Asian powers such as China and India.

But at a summit of the Shanghai Cooperation Organization (SCO), concerns came to light.

“I know that today’s era is not an era of war, and I told you about it on the phone,” Modi told Putin during a televised meeting in the ancient Uzbek city of Samarkand. .

As Modi made the remark, Russia‘s supreme leader since 1999 pursed his lips, glanced at Modi, then looked down before touching the hair on the back of his head.

Putin told Modi he understood the Indian leader was worried about Ukraine, but that Moscow was doing everything it could to end the conflict.

“I know your position on the conflict in Ukraine, the concerns you constantly express,” Putin said. “We will do everything to stop this as soon as possible.”

He said Ukraine had rejected negotiations. Ukraine has said it will fight until it drives all Russian troops out of its territory. Ukrainian President Volodymyr Zelensky says he will never agree to a “peace” that allows Russia to keep Ukrainian land.

The war in Ukraine, sparked when Putin ordered troops to invade on February 24, has killed tens of thousands of soldiers, sparked the worst confrontation with the West since the Cold War and sent the world economy into an inflationary spiral. .

India has become Russia’s second-largest oil buyer after China as others cut back on purchases after the invasion.

Putin told Chinese President Xi Jinping on Thursday that he understood Xi was concerned about the situation in Ukraine, but praised the Beijing leader for his “balanced” stance on the conflict.

Xi, on his first trip outside China since early 2020, did not mention the war in Ukraine in public.

The Chinese leader said the world had entered a new period of turmoil and that partners such as Putin and Central Asian leaders should prevent foreign powers from inciting “color revolutions”.

“The world has entered a new period of turbulent change, we should grasp the trend of the times, strengthen solidarity and cooperation, and promote the building of a closer community with a shared future with the Shanghai Cooperation Organization. “, Mr. Xi said.

“We should support each other in our efforts to safeguard security and development interests, prevent outside forces from staging color revolutions, and jointly oppose interference in the internal affairs of other countries under any pretext. that is.”

Xi criticized “zero-sum games and bloc politics”, a veiled reference to the United States, which Beijing has criticized in the past for relying on allies to counter China’s rise.

Putin has repeatedly said the United States is plotting so-called “color revolutions” similar to those that have swept established power elites in places like Ukraine.

Russian President Vladimir Putin met Chinese President Xi Jinping at a summit in Uzebekistan in a bid to strengthen relations with his remaining allies after a staggering week of losses in Ukraine and amid growing dissent within his own country.

The US denies such claims and says they show the paranoid nature of Putin’s Russia.

The conflict in eastern Ukraine began in 2014 after the overthrow of a pro-Russian president in the “Maidan” revolution and the annexation of Crimea by Russia, with Russian-backed separatists fighting the Ukrainian armed forces.

The Chinese Communist Party, which is likely to give Xi a third term in office next month and cement its place as the country’s most powerful leader since Mao Zedong, has in the past warned against so-called ” color revolutions”.

Xi stayed away from a dinner attended by 11 heads of state in accordance with his delegation’s policy on COVID-19, an Uzbek government source told Reuters on Friday.

2022-09-16
Previous Post: Russian nationalists rage after stunning battlefield setback
Next Post: 1920 – when the workers were told not to touch the Russian Revolution