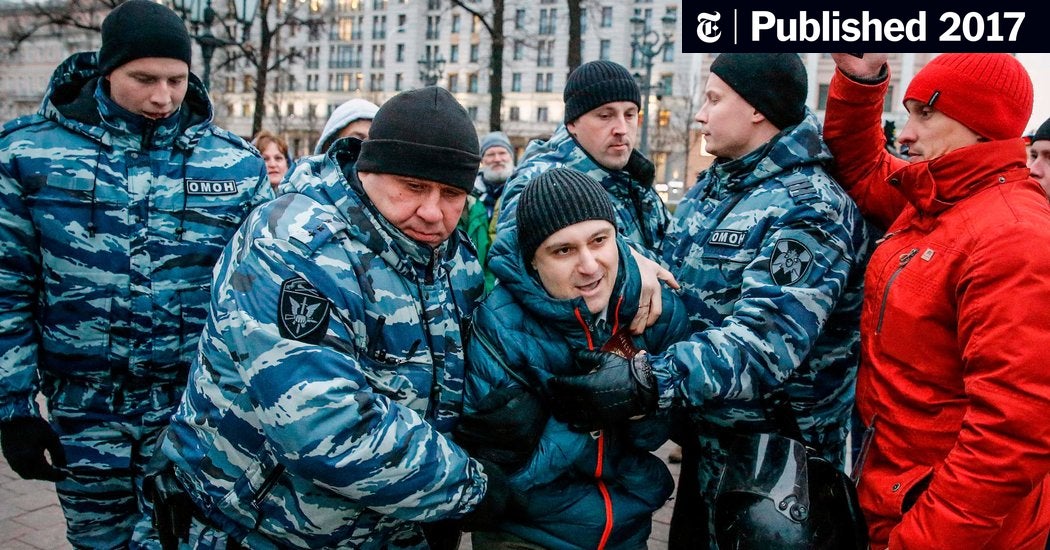 MOSCOW — Police arrested more than 200 people in a Sunday raid that local media linked to an obscure right-wing movement that had called for a repeat of the Russian Revolution, timed as its 100th anniversary approached.

The movement, called Artpodgotovka, or Art Preparation, had agitated in online posts for followers to prepare for revolution, but had not been widely known or taken seriously until the weekend.

The low turnout did not seem to pose a real threat. People who followed instructions in the group’s online posts and showed up at noon on Sunday in Manezh Square in central Moscow were left in apparent confusion before officers arrested them.

“It was a very strange picture,” said Aleksandr Verkhovsky, the director of sova Center, a non-governmental organization that monitors far-right groups in Russia.

The leader of the movement, Vyacheslav Maltsev, a video blogger based in France, had for months posted videos on YouTube calling on supporters to revolt on November 5. He called it “revolution 2017”.

November 5 falls one day after a public holiday in Russia known as Unity Day, a successor to the old Soviet observance commemorating the Bolshevik Revolution of 1917. President Vladimir V. Putin introduced the new holiday at the start of his mandate.

The event planned by Mr Maltsev may have coincided with the aftermath of protests by nationalists who used Unity Day to stage marches against immigrants. Many nationalist activists were in the streets this weekend.

The timing created some initial confusion about who was in police custody.

Several dozen demonstrators were arrested during the nationalist march on Saturday, Unity Day, which had no connection with Mr. Maltsev’s call for revolt.

It is unclear whether all of those arrested on Sunday were supporters of Mr Maltsev, or even aware of his blog posts, or whether they had stumbled upon the rallies thinking they were a continuation of protests by Unity Day.

Mr. Verkhovsky, a longtime observer of nationalist groups, said many of the same people showed up at both events.

Artpodgotovka is a nationalist and populist movement that has tried to emulate far-right organizations in Europe. While the Kremlin has funded and is believed to have links to European far-right parties and organizations, the weekend’s arrests underscored its low tolerance for such groups at home.

Police reported 230 arrests in Moscow on Sunday, according to the Interfax news agency. Similar rallies took place in other Russian cities after online posts called on supporters to come out at midday Sunday in a main square in their town.

Some in the crowd in Moscow carried knives and pistols that fire rubber bullets, which are legal in Russia for self-defense, Interfax reported.

The Federal Security Service, Russia’s main law enforcement agency, said in a statement on Friday that it had dismantled several Artpodgotovka cells and that the members had “the objective of organizing a revolution in Russia “. The statement said the group planned to attack police officers, burn down administrative buildings and create mass unrest.

In July, Russian prosecutors charged Mr Maltsev under a law that prohibits “calls to commit extremist actions”. But because authorities have also used the law against peaceful opposition figures in recent years, the accusation has received little attention.