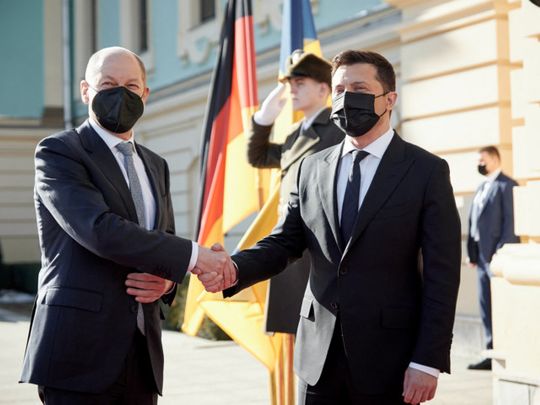 Kyiv: German Chancellor Olaf Scholz landed in Kyiv on Monday for crisis talks ahead of a dramatic visit to Moscow to avert what Berlin sees as the “very critical” threat of a Russian invasion.

Upon his arrival in Ukraine, the German leader went directly to President Volodomyr Zelensky, whose government demanded an urgent meeting with Russia to explain why he deployed more than 100,000 troops to Ukraine’s borders.

European leaders warn the crisis is the worst security threat to the continent since the Cold War, with Russian President Vladimir Putin demanding a rollback of Western influence in Eastern Europe and a ban on EU membership Ukraine to NATO.

The United States has warned that Russian forces are about to attack Ukraine, and Western allies have prepared what they warn would be a crippling set of economic sanctions in response.

As Scholz made his way to the presidential palace, the streets of Kiev were calm under blue skies and bright sunshine.

Ukrainians went about their business despite fears that commercial flights to and from the country would be disrupted.

US intelligence officials fear weeks of crisis talks have given Russia time to prepare for a major offensive – should Putin make the ultimate decision to attack Ukraine.

“We are digging trenches where the Ukrainian soldiers can quickly jump and defend themselves in case the Russians attack,” 15-year-old Mykhailo Anopa told AFP.

He was speaking near the frontline separating Kiev-held territory from that under the control of Moscow-backed insurgents in the separatist east.

Washington reiterated its warning on Sunday that Russia was now ready to strike “at any time”. He said the assault would likely begin with “a heavy barrage of missiles and bombings”.

Ukraine has demanded a formal meeting with Moscow and other members of the pan-European security body, the OSCE, which could explain “the buildup and movement of Russian forces along our border”.

On Sunday, Ukraine’s presidency said Zelensky had also urged Biden to travel to Kyiv “in the coming days” to show his moral support.

The White House made no mention of the invitation in its reading of the 50-minute call. The United States on Saturday ordered all non-emergency personnel to leave its embassy in Kyiv.

Germany is playing a central role in mediation efforts in eastern Ukraine where a grueling conflict with Russian-backed separatists has claimed more than 14,000 lives.

But Germany’s close trade relationship with Moscow and heavy reliance on Russian natural gas imports have been a persistent source of concern for pro-Western leaders in Kyiv and Biden’s team.

Scholz warned Russia that it should “not underestimate our unity and resolve,” but also avoided unequivocally backing Biden’s pledge to “terminate” the company’s new Nord Stream 2 gas link. Russia with Germany.

Kiev is also upset with Berlin for not joining some of its NATO allies in starting to supply arms to Ukraine.

Ukraine’s Ambassador to Berlin Andriy Melnik railed against “German hypocrisy” in a tweet on Sunday, saying Germany was exporting “dual-use goods to Russia” but offering “no weapons for self-defence of Ukraine”.

Scholz’s visit to Moscow on Tuesday follows the closure of the German-language service of Russian network RT and the Moscow office of Deutsche Welle in Germany.

Despite diplomatic efforts, a growing number of Western countries are withdrawing staff from their embassies in Kyiv and urging their citizens to leave Ukraine immediately.

But departures could be complicated by the looming threat of skies over Ukraine closing due to growing risks for airlines.

On Monday morning, before the potential shutdown, Kyiv International Airport was busy but there were no signs of panic despite long queues to leave.

Yuriy Fedynskiy, a 46-year-old musician, was heading to the United States with his pregnant wife and four children, leaving behind his village in eastern Ukraine.

“Yes, war is very, very possible. And it’s not good for having babies,” he said with a laugh, explaining that he wanted his children to learn English and escape the fate that Putin might inflict on their homeland.

“It could happen at any time. Will it happen? Only Putin knows. But we are not going to let Putin decide the fate of our family,” he told AFP.

Industry analysts believe other international airlines may soon ban flights to Ukraine due to the rising cost to insurers.

2022-02-14
Previous Post: War on Russia: 6 steps Britain should take to avoid war with Putin | World | News
Next Post: The cruiser Aurora marked the beginning of the Russian Revolution