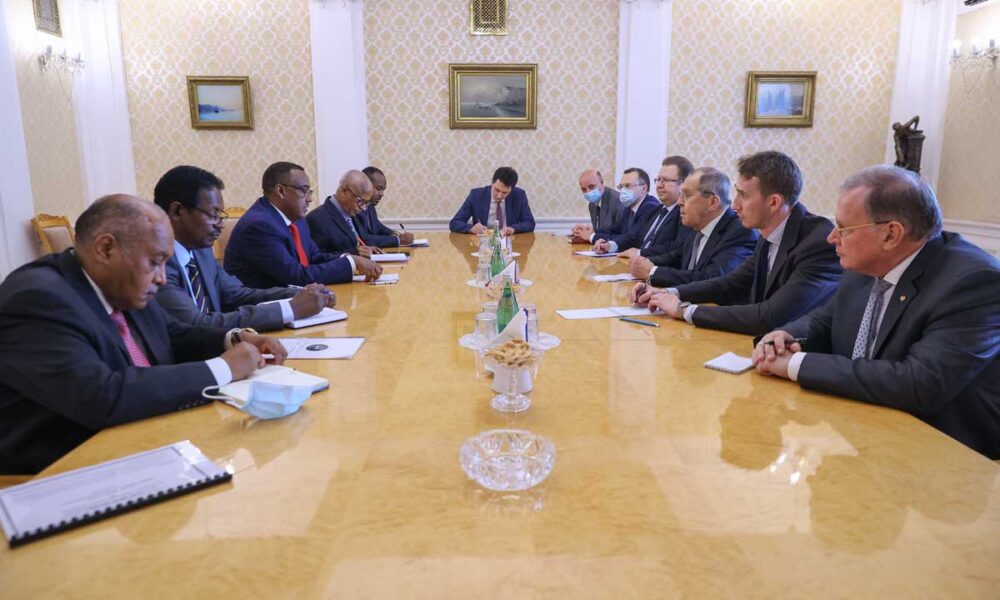 As we learned in Soviet times, on May 25 all progressives celebrate Africa Day, also known as African Freedom Day. It commemorates the creation of the Organization of African Unity by thirty African leaders on May 25, 1963 in Addis Ababa. On this day, a wide variety of events are organized around the world: exhibitions, cultural forums, concerts, film festivals and university lectures to remind everyone of the African continent, its indisputable achievements and, equally evident, the problems unresolved. Africa Day was celebrated not long ago, providing an opportunity to discuss this part of the world.

It would be true to say that each of us knows Africa in his own way. For me, then as a child, Africa was first revealed through the pages of an old, well-documented copy of Korney Chukovsky’s book. * Later, of course, I read Louis Boussenard and Jules Verne, Mayne Reid and Alphonse Daudet, Nikolay Gumilev and Ernest Hemingway… Yet none of these wonderful writers have ever been able to superimpose themselves on the deeply imprinted images of the good Doctor Dolittle and the bad Ben Ali. My intermittent travels in Africa, from Egypt in the north to South Africa on the other side of the continent, have not erased these images either. Faded images in a children’s book sometimes resurface in my memory.

By the way, for Chukovsky, who was never able to visit Africa, the continent was absolutely sorry. Chukovsky’s Africa is populated exclusively with anthropomorphic representatives of the local fauna: crocodiles and hippos, gorillas and rhinos, and other good and bad animals. As for humans, in addition to the protagonists, Chukovsky only mentions little Vania and Tanya, who secretly fled to Africa when their parents fell asleep casually. Most likely, there is no one else in the book as the author needed to shine the spotlight on the confrontation between the selfless liberal Dr Dolittle and the cynical realist Ben Ali.

However, when Chukovsky was working on his book a hundred years ago, Africa was indeed quite sparsely populated. Various estimates place Africa’s population at the start of the 20e century to 93-110 million people, which is significantly less than, for example, the population of the Russian Empire at that time. Around the mid-20se century, Africa already had half a billion inhabitants, and by the end of the century that number had risen to 800 million. Today, Africa’s total population (1.365 billion) is almost ten times that of Russia; Africa is catching up with demographic giants like China and India and will soon overtake them both.

The current forecast for Africa’s population in 2050 is at least 2.4 billion and 4.2 billion in 2100. In other words, by the end of this century, the vast desolate swathes of the Africa will be home to nearly 40% of the world’s population. Nigeria’s population alone will have reached nearly one billion by then, that is, one in ten on Earth will be Nigerians. The population of Russia at the turn of the 22sd century will be comparable to that of a single large Nigerian state (Nigeria has 36 states, not counting the capital, which is a federal territory with special status).

By stepping out of the current political situation for a moment and leaving aside the present confrontation between the great powers, one easily arrives at the logical conclusion that it is Africa, and not Russia or China or India. elsewhere, which constitutes the main challenge to the current world order, mainly Western.

However, this long-term issue has nothing to do with geopolitics, which has become trendy again.

Africa is experiencing the most chaotic urbanization at its fastest pace. Before our eyes, huge and poorly governed metropolises are emerging, each with tens of millions of inhabitants. The urban problems of the future will be embodied in size larger than cities on other continents, albeit in terms of infrastructure behind Lagos, Cairo, Addis Ababa, Dar es Salaam, Luanda and Nairobi rather than New York or London, Shanghai or Karachi.

Africa is experiencing the fastest shrinking forests and expanding deserts. The Sahara is advancing on the Sahel countries from the north, causing waves of “environmental refugees” and exacerbating ethnic and religious problems. The African Great Lakes to the east of the continent, including Lake Victoria, Lake Tanganyika, and Lake Nyasa, are becoming shallow, yet they contain about a quarter of all the fresh water on Earth.

Climate change affects Africa more than any other continent and will do so more and more over time. The increasing heat has reduced the growing season from 50 to 100 days in some areas. Most countries on the continent, including the most populous, are already unable to feed themselves; National food shortages tend to increase, as do economic and social inequalities and the resulting potential for civil and inter-country conflict.

How does the collective West or rather the collective North respond to this challenge? The African scene still has its Dr Dolittles and Ben Alis. The eminent European theologian Albert Schweitzer, cultural philosopher, humanitarian, musician and physician, was a surprising embodiment of the classic image of Dr Dolittle. He has devoted most of his life to treating Africans in a village hospital in Gabon. Yet far more often, Dr Dolittle’s role today is played by the director of a large charitable foundation, the employee of an international development institution, or the official of a government agency providing technical assistance to states. foreigners. Today, a whole industry has emerged to provide aid for education, health, agriculture and social development in Africa.

The image of Ben Ali has also changed considerably over the past hundred years. There are still colorful, tireless international adventurers condottieri and soldiers of fortune, be it the almost legendary arms dealer Viktor But, who is currently serving a twenty-five-year sentence in an American prison, or anonymous soldiers from private military companies, who fight in numerous conflicts. across the world, especially in Africa. Typically, however, Ben Ali is now disguised as the much less imposing chief of a large transnational corporation working in energy, mining or finance. They came to Africa to do business: producing oil and gas, extracting non-ferrous metals, running a logging company, providing food and giving loans to African governments.

The problem is that neither the Dr Dolittle nor the Ben Ali of today are able to slow the exacerbation of the continent’s problems, let alone solve them. For example, large charitable funding for large African universities often has the effect of stimulating the ‘export sector’ in African education: graduates from top universities on the continent strive to use their capacities and skills somehow. goes to Europe or America rather than home. And transnational corporations, both Western and Chinese, have so far done little to help turn Africa into the world’s new “industrial workshop”. Recently, the current Ben Alis’ interest in Africa has generally waned: total foreign direct investment has been declining for at least seven years, and the number of new projects launched in Africa with foreign participation has fallen sharply. two-thirds in the midst of the pandemic. .

If you don’t come to Africa, Africa will come to you.

The global North will be unable to close itself off from the global South, and the rapidly growing but underdeveloped Africa will inevitably make its presence felt through the multiplication of regional conflicts and the rise of international terrorism, an exacerbated situation on the global food market. and a growing contribution to global warming.

Nevertheless, it will be felt above all through the inevitable increase in transcontinental migratory flows. The likely magnitude of Africa’s impending migratory pressure on the rest of the world is difficult to predict, but it is quite obvious that we are talking colossal numbers, far exceeding anything human history has ever known. . The European migration crisis of 2015 will appear to be a minor problem compared to what may loom in the developed countries of the North in the not-so-distant future.

At the same time, a young Africa, with its bubbling new blood, is not only the main potential challenge for humanity, but also its main potential opportunity. Unlike aging Europe, unlike flourishing North and East Asia, unlike the United States which has passed the peak of its power, Africa is a continent that has everything ahead. it. It has many potential sources of growth for the global economy in the second half of the 21st century and for the future. It is not only an exotic place for the magical adventures of little Vanya and Tanya, it is the place where the future of humanity will be largely determined.

From this perspective, Africa should become a global project that could unite East and West, Atlantic liberals and Eurasian autocrats. They would be united not by the fairy altruism of Dr Dolittle, nor by the grotesque cynicism of pirate Ben Ali, but by a sober consideration of their long-term national interests. The African project is expected to involve a coordinated global redistribution of hundreds of billions of dollars invested annually in large-scale projects in agriculture, renewable energy sources, urban development, middle and higher education. , public health and municipal governance.

Instead of being targeted centerpieces based on plans provided by today’s charitable foundations, specific programs should be systemic and comprehensive; they should cover the entire continent and be implemented over several decades. Neither the IBRD nor the IMF will be able to manage the African project, which means radically new institutional solutions are needed. Of course, no one likes to part with their money, but the future of humanity is worth the Global North bearing the generally achievable burden of an additional tax.

Let us stress once again that the main planetary challenge of our century does not lie in the Atlantic-Eurasian confrontation; it lies in the American-Chinese rivalry and in the deep divide between North and South. The African continent remains the indisputable center of the global South. Humanity will not be able to move forward successfully in the next hundred years without responding correctly to the African challenge thought of this century.

* The author refers to a popular book by Korney Chukovsky, which is a Russian adaptation of Hugh Lofting Dr Dolittle’s story; the Russian version features Dr. Aybolit (Ouch-it-hurts) and villainous Barmaley, which roughly matches Dr. Dolittle and pirate Ben Ali, but the book differs significantly from its source.

From our partner RIAC