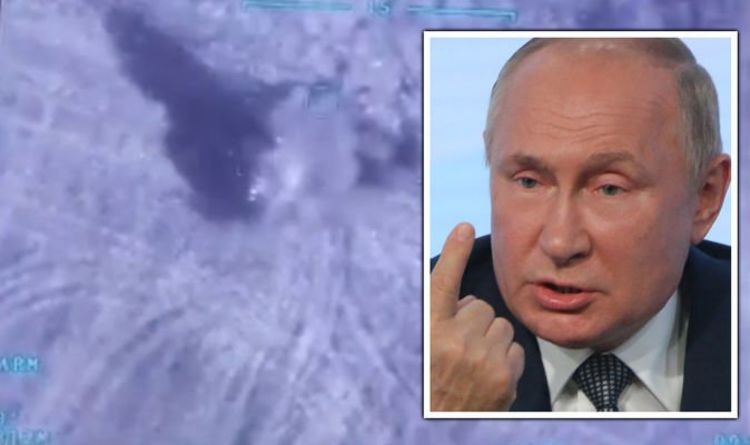 Ukrainian forces launched an airstrike in the Donbass region on Wednesday. This is the first time that TB-2 drones have been used to destroy military equipment in the region. It is claimed that the military equipment which was destroyed fired at the village of Granitne.

Along with the annexation of Crimea, pro-Kremlin forces clashed with Ukrainian troops in the Donbass region in 2014.

The region borders Russia and Ukraine and has seen large numbers of troops amassing from both states.

A peace accord was signed in Minsk in 2015, but that did not end the sporadic conflicts in the region.

Russian officials have also accused Ukraine of trying to exacerbate tensions in the region.

Rodion Miroshnik, who represents the self-proclaimed Lugansk People’s Republic, warned that escalation could be imminent and wiped out any chance of settling on a roadmap out of the conflict.

He said on Tuesday: “Ukraine has derailed the discussion on the roadmap for the settlement.

“The Ukrainian negotiator used various tricks to divert the dialogue from the discussion on the road map.

“In fact, nothing new has happened.

Despite Russia’s claims, Ukrainian officials have warned that there have been several ceasefire violations this year ahead of Tuesday’s drone strike.

Ukrainian authorities have also accused Russia of sending 41,000 troops to the border.

Earlier this year, White House press secretary Jen Psaki warned that Russian troop numbers were at their highest level since 2014.

She admitted that the United States was concerned about Russian aggression in the region.

She said: “The United States is increasingly concerned about the recent escalation of Russian aggressions in eastern Ukraine, including Russian troop movements across the Ukrainian border.

“Russia now has more troops than at any time since 2014.”