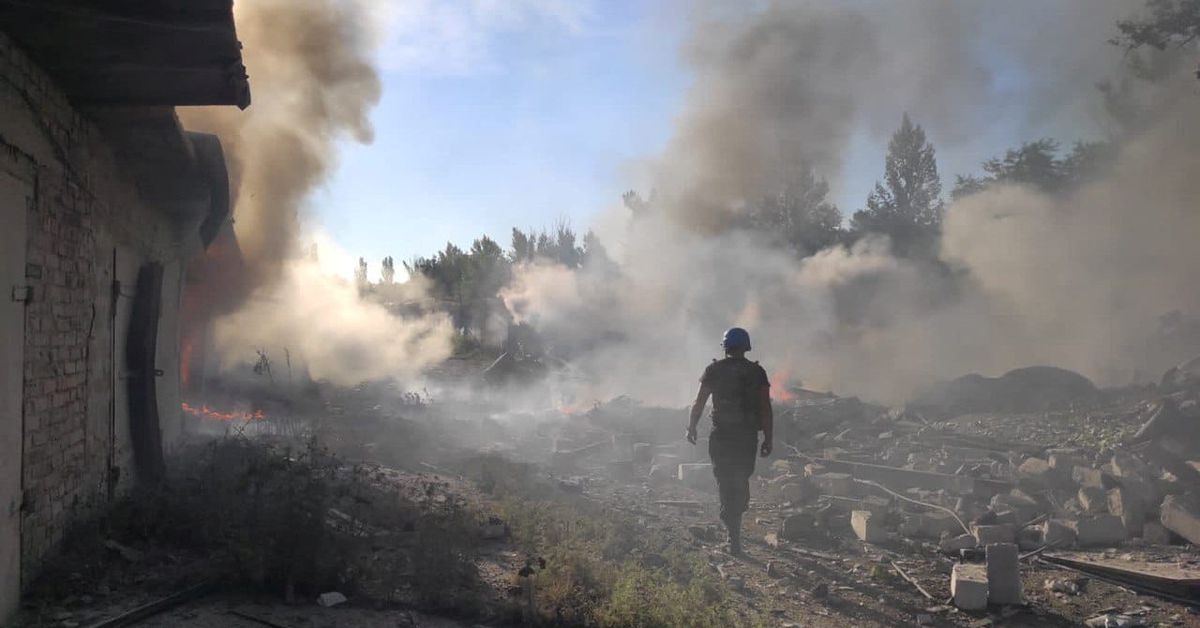 Explanation: Blood, Treasure and Mayhem: The Cost of Russia’s War in Ukraine

A rescuer walks among debris at the site of a residential area destroyed by a Russian military strike, as Russia’s attack on Ukraine continues, in the town of Toretsk, Donetsk region, Ukraine on July 27 2022. Ukrainian State Emergency Service Press Service/Handout via REUTERS

Here are the main impacts of the war:

Since February 24, 5,237 civilians have been killed and 7,035 injured, although the actual casualties are much higher, the Office of the United Nations High Commissioner for Human Rights said on July 25. https://www.ohchr.org/en/press-releases/2022/07/ukraine-civilian-vicualty-update-25-july-2022

Most of those killed or injured were victims of explosive weapons such as artillery, missiles and airstrikes, OHCHR said.

Neither Russia nor Ukraine gave details of military deaths in the conflict.

US intelligence estimates that around 15,000 Russian soldiers have been killed so far in Ukraine and three times as many wounded, equivalent to the total number of Soviet deaths during Moscow’s occupation of Afghanistan in 1979 -1989.

The conflict in eastern Ukraine began in 2014 after the overthrow of a pro-Russian president in Ukraine’s Maidan Revolution and the annexation of Crimea by Russia, with Russian-backed forces fighting the Ukrainian armed forces.

Since February 24, a third of Ukrainians – who number more than 41 million – have been driven from their homes, the largest current human displacement crisis in the world, according to the United Nations agency RefugAe.

There are currently more than 6.16 million registered Ukrainian refugees across Europe, with the highest numbers in Poland, Russia and Germany, according to agency data.

Besides the human losses, Ukraine has lost control of around 22% of its territory to Russia since the annexation of Crimea in 2014, according to Reuters calculations.

It lost part of its coastline, its economy was crippled and some towns were turned into wastelands by Russian bombing. Ukraine’s economy will shrink by 45% in 2022, according to the World Bank and the International Monetary Fund. Read more

The true dollar cost to Ukraine is unclear. Prime Minister Denys Shmyhal said this month that full post-war reconstruction would cost around $750 billion. It may be much more.

It is not known how much Ukraine spent on the fighting.

The war has also cost Russia dearly – although Russia does not disclose the costs, which are state secrets.

Besides the military costs, the West has tried to punish Russia by imposing harsh sanctions – the biggest shock to the Russian economy since the collapse of the Soviet Union in 1991.

Russia’s central bank now expects the $1.8 trillion economy to contract 4-6% in 2022, less than the 8-10% contraction it predicted in April. Read more

Still, the impact on the Russian economy is severe – and not yet entirely clear. It has been shut out of Western financial markets, most of its oligarchs are sanctioned, and it has difficulty sourcing certain items such as microchips.

Last month, Russia defaulted on its foreign bonds for the first time since the calamitous months following the Bolshevik Revolution of 1917. Read more

The invasion and Western sanctions against Russia have led to sharp increases in the prices of fertilizers, wheat, metals and energy, fueling both a brewing food crisis and an inflationary wave sweeping across the Mondial economy.

Attempts to reduce dependence on Russian oil, gas and petroleum products – or even cap their prices – have exacerbated what is already the most serious energy crisis since the Arab oil embargo in the 1970s.

After Russia cut off flows through the Nord Stream 1 gas pipeline to Germany, wholesale gas prices soared in Europe.

A complete shutdown would tip the euro zone into a recession, with sharp contractions in Germany and Italy, according to Goldman Sachs.

The International Monetary Fund now expects the global economy to grow 3.2% this year, down from 6.1% last year, and significantly below its April forecast of 3.6%, its forecast for January forecast of 4.4% and its October forecast of 4.9%. Read more

In a “plausible” alternative scenario that includes a complete cut off of Russian gas supplies to Europe by the end of the year and a further 30% drop in Russian oil exports, the IMF said growth would slow to 2.6% in 2022 and 2% in 2023, with near zero growth in Europe and the United States next year.

Since the outbreak of war, the European Commission has lowered GDP growth projections for the 27-nation bloc to 2.7% this year and 1.5% in 2023, from 4.0% and 2.8% respectively, compared to what was planned before the Russian invasion on February 24.