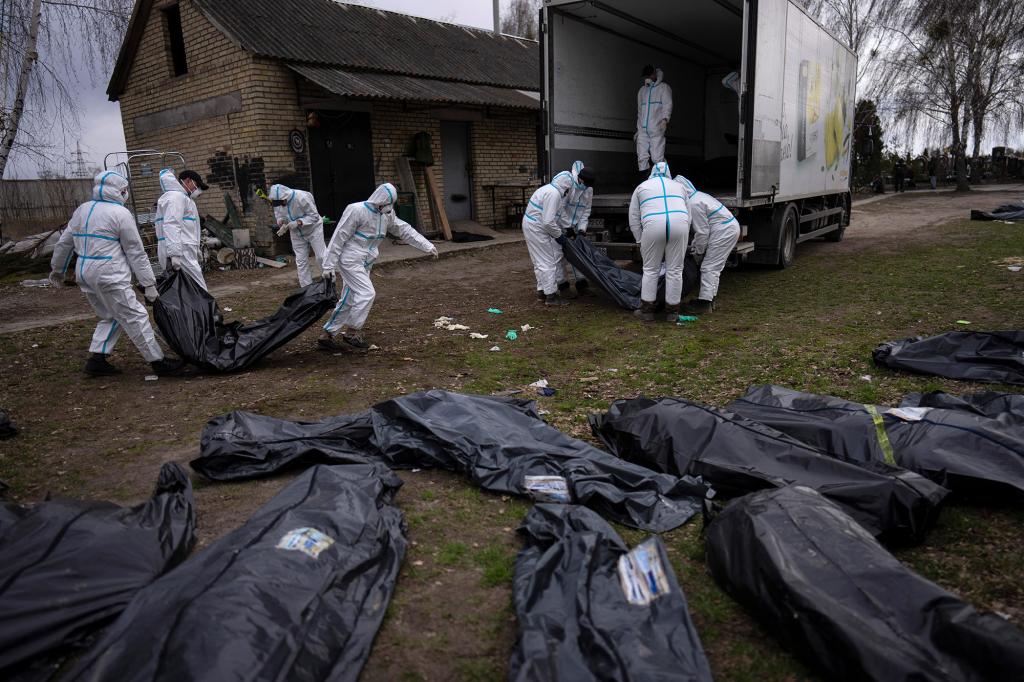 KYIV — What surprises most about a visit to the Ukrainian capital is how peaceful the city is. By local standards, traffic is smooth and the trendy hipster cafes are rarely full. Yet despite the ubiquitous roadblocks, a striking sense of normalcy is in the air. Sunbathers relax on the beach by the Dnipro River, skateboarders pass through manicured parks, and most locals seem to summarily ignore the frequent air raid sirens.

Yet just 20 minutes from the city center, 80% of all buildings in Irpin, a suburb of 60,000 people, were destroyed during the Russian siege in March. For four weeks, those who were unable to flee hid in the basements of their buildings without water, food, medicine or electricity. Only a small bodega-like store on the main street was stocked with basic necessities and served as a charging station for cell phones. Getting there under artillery fire proved fatal for many.

In the nearby town of Bucha, there is not much left to see these days, except for a few houses on Vok’zalna Street, destroyed during the attack on Ramzan’s tank column Kadyrov in April. Yet exactly three months ago, the quaint suburb with modest single-family homes was the site of some of the worst massacres in living memory, with more than a thousand Ukrainian civilians executed by retreating Russian troops, including a lot at close range.

During the G-7 summit in the Bavarian Alps on Sunday, Russian precision-guided rockets hit a nine-story apartment building and a day care center in Kyiv. This fact alone tells us all there is to know about the nature of Russia’s “special military operation” to “denazify” Ukraine. The following day, Russia bombed a shopping mall in Kremenchuk, central Ukraine.

This is a campaign of terror, aimed at demoralizing the Ukrainian public into submission, and then proceeding with the erasure of Ukrainian nationality.

For my part, I have no doubt that Russian President Vladimir Putin will eventually fail. “The Russians think their brutality will make us fear them,” a Ukrainian told me. “In reality, it only makes us angry.”

Throughout there is an overwhelming force of resilience and quiet determination – reminiscent of many descriptions of Britain’s ‘stiff upper lip’ during the Blitz. In Irpin, a middle-aged man suddenly came out of his half-bombed building. The apartment is uninhabitable, he says, but his plants need watering. Minutes later, a mother with a toddler on their postprandial constitutional pass passes us by, as if oblivious to their apocalyptic surroundings. In short, life goes on.

Ukraine’s territorial defenses, put in place just weeks before the Russian invasion, are being strengthened, with more and better training provided to hundreds of thousands of reservists. In and around Kyiv, roadblocks set up in March to halt the advance of Russian troops are being tightened in anticipation of a possible return of the invaders.

However, the war is taking its toll. On Sunday during my visit, the Kyiv Maidan held a vigil for Roman Ratushnyi, one of the student leaders of the 2014 “Dignity Revolution”, who was killed by Russians in Izyum, aged 24.

A friend from Ukraine had to apologize shortly after arriving in Irpin with our group, driving an Uber back to town – the visual overload of senseless destruction was just too much to process.

Ukrainians are determined to put an end to it. Exactly when they do so and how long the resulting political agreement lasts, however, remains a matter of political choice for the Biden administration and its European partners.

If equipped with modern NATO-grade weaponry – artillery, tanks, fighter jets, anti-ship missiles – Ukraine can repel Russian invaders in months or even weeks. If the assistance slows down, the Ukrainians will probably hold the line in the Donbass and in the south. Yet undoing Russia’s territorial gains and signaling to the world that Putin has been defeated may well be beyond their reach.

Those who oppose a maximalist form of military assistance to Ukraine on prudential grounds are wrong. It is our weakness and hesitation, not to redouble our efforts to support Ukraine, which are seen as an escalation by the Kremlin. More seriously still, not opposing forcefully a war of conquest in Europe, which aims to eradicate a nation of 40 million inhabitants, is a grave moral fault.

Prioritizing our own comfort over the lives of those who fight not only to defend their own country, but some of the West’s most fundamental values ​​- freedom, democracy, national self-determination – will not remain in memories of history.

Dalibor Rohac is a senior fellow at the American Enterprise Institute in Washington, DC. Twitter: @DaliborRohac.