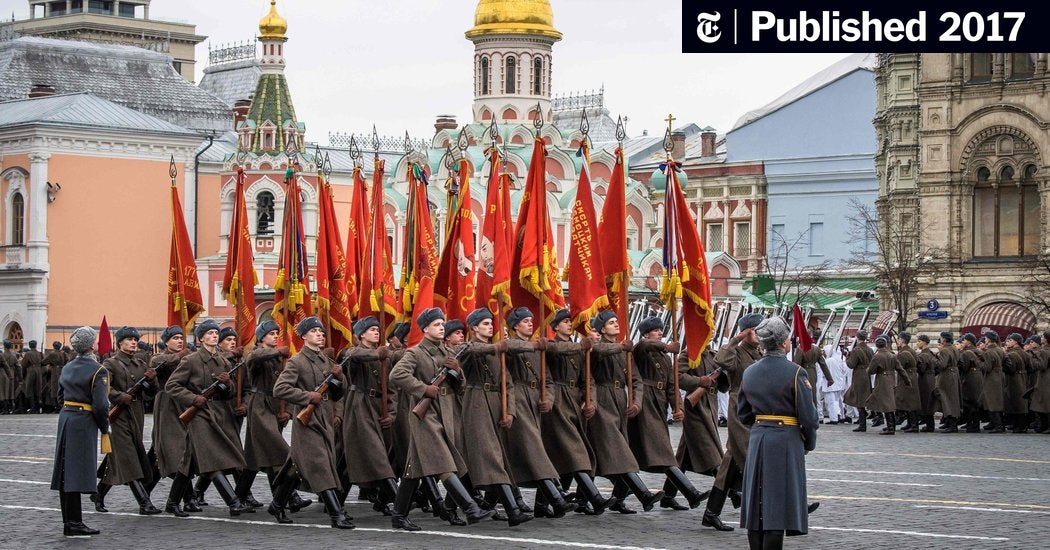 Communists celebrate the centenary of the Russian Revolution in Moscow

MOSCOW — Russian communists and left-wing activists from around the world marched through central Moscow on Tuesday to commemorate the centenary of the Russian Revolution, in the pale shadow of major Soviet protests in Red Square.

The mood at this year’s celebration was more subdued than at previous ceremonies, despite the landmark anniversary and the global mood as organizers invited representatives of left-wing movements from 88 countries to attend. The day also highlighted the stark contrasts between today’s Russia and the ideals embraced in the revolution 100 years ago.

Holding red flags and portraits of Lenin and Stalin, several thousand activists marched through Tverskaya Street, the city’s main thoroughfare, towards the Kremlin. Instead of marching further towards Red Square, as had happened for decades under Soviet rule, they turned left, stopping for a rally in Revolution Square, where in the middle stands a only monument to Marx.

Despite the more low-key nature of the event, some also noted positive changes. “In Soviet times, we were told to go to these gatherings,” says Tatyana Korolyova, 63, a music teacher. “Now we do it our way. It’s better now that we have free choice.

For generations of Russians, November 7 was one of the main holidays in the country, with events held in all major cities. The heavily choreographed main parade took place in Moscow’s Red Square with tanks and missile launchers rumbling past Soviet leaders, saluting them from Lenin’s tomb.

This year, the government has hijacked the anniversary of the revolution in the field of art exhibitions and research materials. Instead of a communist demonstration, Tuesday’s Red Square event instead honored the Nov. 7, 1941, military parade held as German troops stood at the gates of Moscow.

President Vladimir V. Putin quietly avoided celebrations, instead attending routine meetings in the Kremlin. In 2005, Mr. Putin moved the public holiday from November 7 to November 4 and declared it Unity Day. Critics say the new celebration is ill-defined and many Russians are unsure of its meaning.

Despite his absence, Mr. Putin’s presence was still felt at the rally, with some young Communists shouting: “Russia without Putin” and “We don’t need the thief Putin, we need a living Lenin.”

At the rally, Communist Party leader Gennady A. Zyuganov said the red flag would inevitably fly over the Kremlin again. “We were all betrayed in 1991, but we didn’t lower our heads,” Zyuganov said from the stage, referring to the fall of the Soviet Union. “I am absolutely sure that the banner of socialism will fly over Russia and the whole world.”

Sergei Grankin, 17, wearing a Russian sailor cap, agreed. “We are in opposition to the current government, and together with my comrades, we will do everything for a revolution to happen again,” he said.

“The government we have now is temporary,” said Grankin, who is still a student but already leads a group of young communists in Moscow.

For many who had come from abroad, the occasion was their first time in Russia, so some features of Russian life were surprising.

“Russia doesn’t look like a socialist country,” said Philip Astvald, 30, a Swedish forklift driver from a communist family. “You can see the income disparity here is huge. It’s always a very special event for me – the whole communist movement was born here.

For some communist supporters, the rally was an opportunity to sell their old books and pins, which would not have been tolerated by the Soviet government three decades ago.

For other activists, it was an opportunity to share their own problems. Irina Laputina, 52, said she paid for a new apartment in Moscow that was never built.

“My father was a worker who built many buildings in Moscow, and I don’t even have an apartment now,” Ms Laputina said. “That would never happen in Soviet times.”