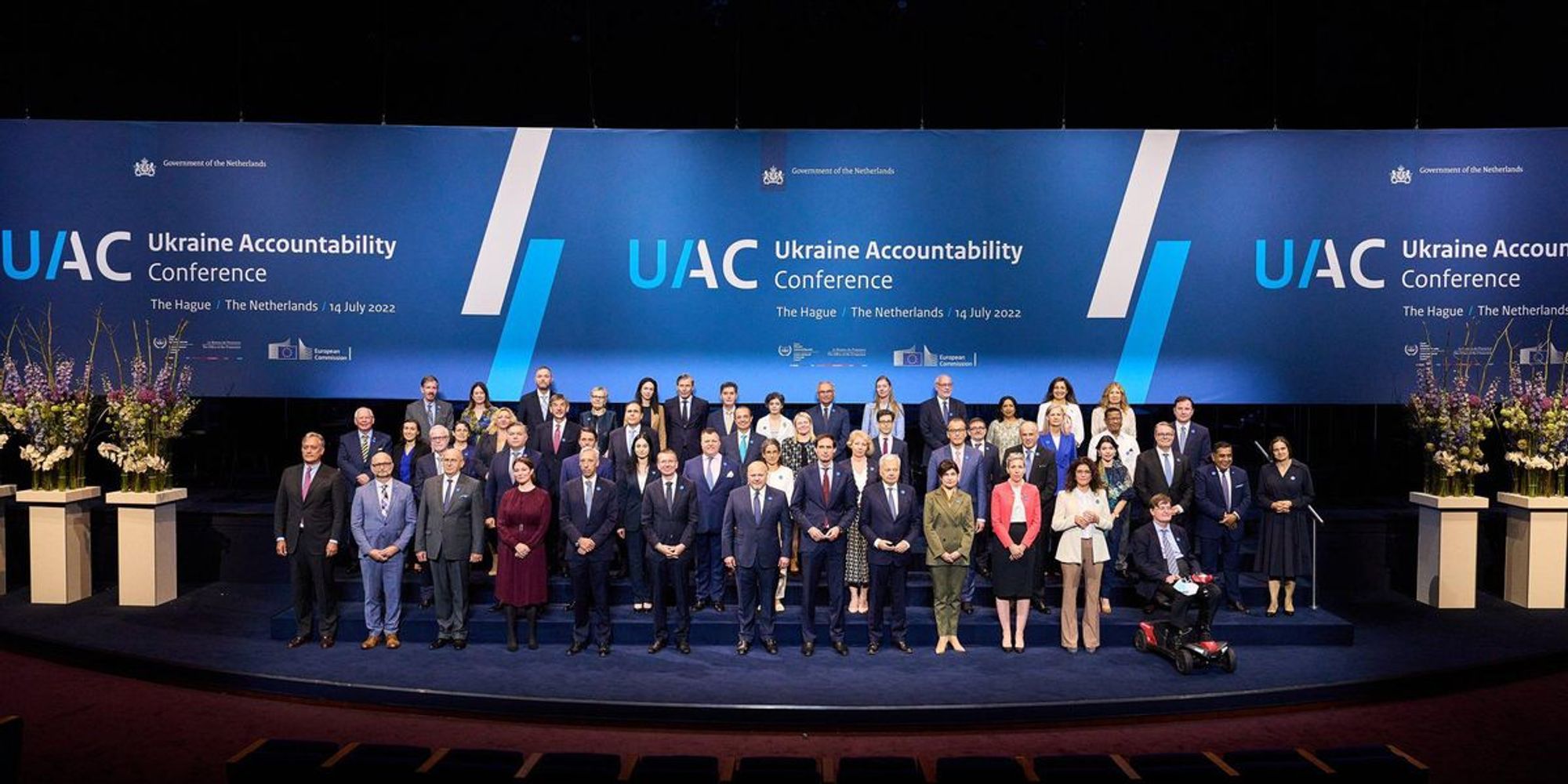 Ukrainian President Volodymyr Zelensky called yesterday’s deadly attack in Vinnytsia an “open act of terrorism”. On Thursday morning, missiles hit the parking lot of a nine-story office building in the small town southwest of Kyiv, far from the heart of the fighting in the Donbass region.

Residential buildings were also hit in the same city, killing 23 people, including children. “Every day Russia kills civilians, kills Ukrainian children, launches missile attacks on civilian facilities where there is no military target. What is this if not an act of terrorism open?” Zelensky said in a statement on social media.

It came as Ukraine’s top war crimes prosecutor and judicial authorities from across Europe met in The Hague to coordinate investigations into crimes committed by Russia since the invasion of Ukraine. . The Netherlands hosted the Ukrainian Accountability Conference with the aim of reviewing existing evidence and establishing a prosecution strategy. It has also provided international war crimes expertise to investigators currently in the field. Zelensky and US Secretary of State Antony Blinken joined the meeting via video link.

War crimes have been reported since the start of the war, including killings, torture, rape, looting and forced deportation of civilians. Russia has always denied any involvement in these war crimes and has stressed that it was carrying out what it calls a “special military operation”.

Zaporizhzhia will hold a referendum on joining Russia

Scenes of destruction in Zaporizhzhia

The head of the civil-military administration of the Russian-controlled part of the Zaporizhzhia region of Ukraine, Yevhen Balitsky, said a referendum would be held in the region in early autumn.

Russia already controls most of the southeastern region, and the referendum will decide whether the region will officially join Russia, Russian news agency TASS reports. “The estimated dates are for the first half of September. We will announce it when we understand the level of preparation and involvement of people,” said Volodymyr Rogov, a member of the main board of the regional administration.

u201cToday russia-terrorist attacked 2 largest universities in Mykolaiv. At least 10 missiles. Now they are attacking our education. I ask universities in all democratic countries to tell Russia what it really is: the terroristu201d

Ten strikes hit the city of Mykolaiv in southern Ukraine overnight, causing powerful explosions, Mayor Oleksandr Syenkevych reported on his Telegram channel. Rescue teams are currently working at the site, and two injuries have been reported so far. The attack occurred when there were “many people in the streets”, added the mayor.

In a separate Telegram post, Vitaliy Kim, head of the Mykolaiv region’s military administration, also reported that two universities were affected. He tweeted“Now they are attacking our education. I ask the universities of all democratic countries to affirm that Russia is really what it is – the terrorist”.

Meanwhile, Dmytro Butriy, the acting head of the military administration of neighboring Kherson region, said 44 settlements in the largely occupied area have been liberated. A Ukrainian offensive in Kherson began in May and has since reclaimed a number of villages. But Butriy told a press conference that the settlements were still under constant Russian bombardment: “We urge people to evacuate to protect themselves and their families. The Russian occupiers are not human,” he said.

Ukraine says there were 17,314 strikes against civilian targets

According to Ukraine’s First Deputy Interior Minister Yevhen Yenin, the Russian military has carried out 17,314 strikes on civilian targets in Ukraine, but only about 300 on military targets since the start of the full-scale war in Ukraine. Russia vs Ukraine, Ukrainian Liga news site. net reports.

These include a medical center in Vinnytsia, which Russian propagandists have called a “military base”, and a high-rise residential building in Chasovoy Yar. Yenin added that nearly 22,000 criminal cases have been filed for war crimes committed by Russian servicemen and their accomplices.

u201cDylan Healy and Paul Urey were captured in south-eastern Ukraine on Monday according to the British non-profit organization Presidium Network https://t.co/dNHQjRVrHGu201d

British citizen Paul Urey, who was captured in April by Russian-backed separatists in Ukraine, is believed to have died in custody. Accused of being a mercenary, Urey was detained in the self-declared Russian-backed Donetsk People’s Republic (DPR) in eastern Ukraine.

He was captured along with another British citizen by Russian soldiers at an army checkpoint in Ukraine. According to the non-profit Presidium Network, they disappeared while helping to evacuate a woman and two children to Dniprorudna in the southern region of Zaporizhzhia.

Serviceman of the Russian Armed Forces

The United Nations High Commissioner for Human Rights (UNOHR) told the BBC that it had verified 271 cases of forced detentions of Ukrainian politicians and civilians in Russia, many of whom were tortured.

Testimonies include scenes of waterboarding, frostbite, damaged ribs and internal organs and the use of electric currents – which allegedly took place in improvised and former official detention facilities controlled by either the “Russian armed forces”. or by “affiliated armed groups”.

Gold mining in the Chelyabinsk region of Russia

The European Union will target Russian gold exports in its next sanctions package, as agreed by G7 countries in late June, European Commissioner Maros Sefcovic announced on Friday ahead of a meeting of European affairs ministers in Prague.

Sanctions are expected to target Russian gold imports into the EU and “close exit routes”. The EU has already adopted six sanctions packages, including an embargo on most Russian oil by the end of the year.

Germany steps up aid to Ukraine

Germany plans to allocate an additional 2.4 billion euros in social benefits to Ukrainian refugees on its territory. Labor Minister Hubertus Heil told German media RND that as many as 800,000 Ukrainians have already found asylum in the country since the start of the war, while some 360,000 of them have applied to the German welfare system.

With around 260,000 Ukrainians potentially looking for jobs in Germany, “now it’s about getting them to work,” Heil said.

Claudia Roth, Minister of State for Culture and Media, visits the opera house in the Ukrainian port city of Odessa

The Ukrainian Cultural Fund has launched a program aimed at reviving the cultural sector of the country which was seriously affected by the war. Any Ukrainian over the age of 18 can apply for a number of scholarships related to cultural and creative industries.

“The cultural front is very important for Ukraine’s victory. We must support our artists and cultural figures, because they found themselves in difficult conditions during the war,” said Oleksandr Tkachenko, Ukrainian Minister of Culture and of the Information Policy. Ukrainian government portal. Many art projects have closed or ceased to exist altogether. “Such a program will be an opportunity to support projects aimed at commemorating the struggle of our people against the occupier, and those that have an educational purpose,” Tkachenko added. .

From articles on your site

Related articles on the web

2022-07-15
Previous Post: Predicting the future of the war between Ukraine and Russia
Next Post: Russian arms exports to Africa slowed by war in Ukraine